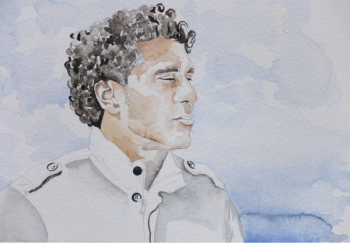 It’s tough to say where this started. Was it the Muslim ban? Was it that Nina Simone documentary? Was it my cousin talking about his time in a refugee camp? Was it seeing a sign for 10pm pickup at a daycare? Or was it my mom and dad breaking curfew during a coup d’etat so I could be born?

I’m not sure. But all that shit went into my film. Making a film is like picking a fight with a bully. You know you’re gonna get your ass kicked, but it’s the right thing to do.

The first draft of my film was rough. Just ideas floating on top of other ideas. But from that wreckage came order, emotion, and most importantly a point of view.

I designed the short to be four different stories so I could work on each one in between editing projects.

I found my narrators through the internet. Reaching out to random voices I liked on podcasts to friends-of-friends. Whether it was recording a teacher in a middle school art room or Venmo-ing money to the daughter of an ex-drug dealer because her Irish accent was Irish but not too Irish. The voices would be the backbone of my film.

Slowly but surely it started to form. I felt like a mason laying bricks. Story by story the film started taking shape.

I didn’t do it all alone. I had friends. Friends who read the script and said, “you HAVE to make this film,” friends who scored the film with newborn twins at home. Friends who left a vacation a day early to restart a server which went down from a thunderstorm. Friends who called in a favor at a rental house so I’d have lights to shoot stop motion. Friends who donated woodcuts and illustrations.  Friends who showed me animation techniques. Friends who said, “just give me the damn clip, I’ll animate it myself.” Friends who made iPhone recordings sound like a million bucks. Friends who popped into my studio and saw a random frame and said, “that looks cool,” a wife who gave up a weekend and hand painted an entire segment frame by frame. Friends who gave up Labor Day weekend to design titles for the film. And most importantly friends who gave me the encouragement to keep going.

As it came together it was magical. It was like a no-hitter in baseball, you live it you don’t talk about it. I worked it and worked it. Weekends, nights, whenever. In my head I could feel it becoming a life form. There’s no other feeling in the world than bolting a film together and watching it down for the first time and feeling your heart murmur. That murmur is your heart dapping up your brain.

I looked at the email subject heading.
I thought it said Official Selection.
I was driving, I pulled over.
Slammed the breaks actually.
Thinking about how the world was going to learn about those stories in my film.
I thought I was going to scream.
Call my mom.
Get out of the car, yell and dance.
But then it was really a rejection letter and the actual subject heading was Official Notification
They had 15,100 entries, fighting for X number of slots, blah blah blah.

Then there were tears. Rejection tears are cold and pithy. They hurt. But they’re just the appetizer because the main entree is crippling self doubt with shame for dessert.

But then on Christmas Eve, I get an email. SXSW invited my film to screen. A World Premiere, at SXSW. My heartbeat quickens, my throat is choked, the hair on my arms are straight. I read and re-read the email several times. I can barely get the words out to my wife. I text everyone who worked on the film. I text everyone I know. I’m floating on air.

For the next two months I thought about SXSW everyday. Multiple times a days actually. It consumed me. I made a website, a trailer, a Google spreadsheet for comp tickets. I emailed every journalist I admire. I Skyped with my publicist to perfect my Q&A. I knew what I was going to wear --  a T-shirt with James Baldwin on it because hey it’s James fucking Baldwin, Am I right? I even bought a Vonnegut paperback from Half Price Books, because hey you gotta have a Vonnegut in your back pocket at SX. I’m not lying, you can ask my wife.

I was nervous and afraid. This was SXSW. There was a director in my short block who had won an Oscar in 2019 for god sakes. But more than that I was excited. I wanted to watch my film with 250 strangers. I wanted to feel the air in the room. There’s a moment in my film where you get sucker punched in the gut. And I wanted to feel 250 people take it in the bread basket. The power of film blah blah blah.

This story ends kinda like it started. A lot of heartache and a lot of angst just waiting in the wings.

The cancellation hurt. It really hurt. In a way I can’t explain. My film never got to bask in the rarefied air of SXSW. James Baldwin is folded up in my dresser. And Vonnegut still has the receipt tucked in it.

When it happened I sent this text to everyone I know:

“I’d rather die at SXSW than not screen my film.”

Yes, dramatic. But that’s how I felt. And I bet there are other filmmakers and musicians that had that same feeling. We’d have risked it, had we been asked.

But there’s perspective, too.

I might die a heartbroken man, but I know that it was a privilege for only the privileged can ever hurt like this.

Sai Selvarajan is an editor at Lucky Post in Dallas. He directed and wrote Coup d’état Math, an animated short which was accepted into SXSW 2020. However that festival was recently canceled due to concerns over the coronavirus. The film depicts four immigrant stories--a fight to be born, a fight to survive, a fight to find your place, and the fight to maintain. In collaboration with fine artists Amanda Selvarajan and Olivia Saldivar, Sai Selvarajan applied distinct visual language to each narrative and journey for a truly unique viewing experience. (The film’s trailer is below.) Coup d’état Math was conceived shortly after the Trump administration announced what became known as a Muslim Ban. In the face of the increasing demonization of immigrants, Selvarajan knew it was a pivotal moment to tell his story and others that help describe the journey people undertake.

Here is the trailer for Coup d’état Math: