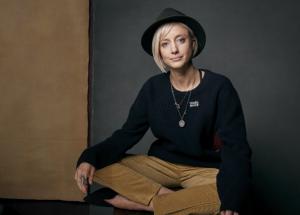 Andrea Riseborough poses for a portrait to promote the film "Nancy," at the Music Lodge during the Sundance Film Festival on Friday, Jan. 19, 2018, in Park City, Utah. (Photo by Taylor Jewell/Invision/AP)

English actress Andrea Riseborough ("Birdman," ''Battle of the Sexes") may be the MVP of the 2018 Sundance Film Festival, with four films playing in Park City, Utah.

There's "Mandy," a revenge actioner in where she plays Nicolas Cage's object of affection; "The Death of Stalin," from "Veep" creator Armando Iannucci where Riseborough is the dictator's daughter; "Burden," where she makes a Ku Klux Klan member (Garrett Hedlund) start to question his beliefs; And one that is especially dear to her heart, the psychological thriller "Nancy" from filmmaker Christina Choe, about a woman who begins to believe that perhaps she was kidnapped as a child. All of the films are seeking distribution

In this Q&A, Riseborough spoke about "Nancy"--which she also produced--and making it "without compromise."

Q: What did you like about the story Christina Choe tells in "Nancy"?

RISEBOROUGH: She created a whole person and that's painfully rare as a woman to find a character that is not passively penned, you know? She's an anti-hero. Christina's voice is really strong and very funny as well. We have a similar dark and dry sense of humor.

Q: How did you go about getting it made?

RISEBOROUGH: We didn't want to have to bend along the way to any kind of preconceived ideas that sales companies might have before the movie is even made — for her to narrow the character. Often the message of the film gets lost and certainly with female voices there are so few that I wanted to be part of preserving hers as a producer. And letting her have whoever she wanted and give her the platform to create this strange, very real, disenfranchised character, who I totally identify with as well. We see anti-heroes in men all the time in cinema. Most of them are anti-heroes: The flawed genius, the broken superhero, the divorced detective. But so rarely do we see females, real females in film. My relationship to being a woman has changed greatly over the last few years in lots of positive ways. And "Nancy" doesn't adhere to any of those preconceived ideas as to who a woman is.

Q: How have you found yourself changing?

RISEBOROUGH: I think just growing up. I think I came out fighting. I came out of the womb fighting. It always seemed a little odd to me, the double standard. I always felt ill at ease with it. The majority of us are being told we're the minority. It can get quite tiresome. After many years of being patronized in taxi cabs, I sort of put my foot down and said (expletive) this, it's not me. It was never me. I wasn't doing anything wrong. I was just going about my daily life with a vagina and I'm sorry for that, to all who it offends.

Q: So you do think it's changing for the better?

Q: You mentioned preconceived ideas of sales companies, can you expand on how producing it yourself gives a film more freedom?

RISEBOROUGH: When Christina originally approached people, before she approached me, maybe five years ago, she was trying to sell a project that had a half black cast and basically everybody she went to for financing said, "Good luck with that." That was the response, which was totally expected up until now in my industry. And it's a part of my industry that has really sat so badly with me that I almost stopped doing it. Quite a few times, I've almost stopped wanting to be part of it. Because YOU can be part of perpetuating such negative stereotypes. I feel like with "Nancy," we managed to make the film without compromise. I know a lot of people had a very beautiful experience making it. It was an incredibly efficient set. We had an extraordinary female crew — predominantly female.

Q: A predominantly female set is pretty rare too.

RISEBOROUGH: I think the older I get the more I need more women around me. It just gets, the hunger for wanting women around me gets greater and greater as I get older. And especially on set and to have a safe work environment. Sometimes it's irritating walking onto a set and being one of three women out of 120 people. But I think it's the beginning of something really, really hopeful. I truly believe that only we can close the door, we are the majority.