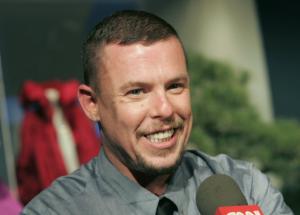 In this May 13, 2008 file photo, British fashion designer Alexander McQueen arrives for the Los Angeles Alexander McQueen Boutique launch party in Los Angeles. A new documentary "McQueen" focuses on the late designer, who killed himself in 2010. (AP Photo/Danny Moloshok, File)

The London fashion world didn't know quite what hit it when Alexander McQueen's disheveled models staggered down the runway at his 1995 "Highland Rape" show, their Scottish-inspired clothing ripped to expose breasts and nether regions.

It was exactly the reaction that McQueen, then in his 20s and subsisting on McDonald's and unemployment checks, was seeking. "I don't want a show where you come out feeling like you've just had Sunday lunch," he said at the time. "I want you to come out either feeling repulsed or exhilarated."

McQueen would go on to provoke, repulse, inspire and exhilarate — often simultaneously — until he was 40, when he tragically took his life. How did a taxi driver's son from working-class London make the unlikely journey to the top of the fashion world, and what made him end it all at the height of his powers? For filmmakers Ian Bonhote and Peter Ettedgui, the two questions proved irresistible; their resulting documentary, "McQueen," opens this week.

Fashion is a compelling topic for documentaries — indeed, few subjects are so enticingly visual. But the challenge is always to peel away the well-polished — and well-guarded — facade. "The fashion world is a bubble," says Ettedgui, who wrote and co-directed the film. "They don't necessarily take kindly to outsiders coming in and revealing their secrets."

The filmmakers approached close to 200 sources, says Bonhote. Finding footage was  painstaking work, but they were fortunate to secure key parts of McQueen's most dramatic runway shows, along with some strikingly candid interviews with the designer — a rarity at fashion shows.

They also found some valuable archival footage — including some private footage that McQueen and his associates captured for fun, trying out a new camera as they traveled to Paris for the designer's new, high-profile post at Givenchy in 1996, looking like grinning kids taking their parents' car for a spin.

The filmmakers were also able to convince some key McQueen family members to speak, namely his older sister, Janet, and her son, Gary, a designer himself who worked for his uncle. And they interview some of McQueen's former colleagues, though not all: Sarah Burton, for example, who succeeded McQueen at his namesake label, doesn't appear.

At the heart of the film, though, is McQueen's work — and the way his bracing talent reverberated through the fashion establishment. Watching now, one can almost feel the gasps in the audience as the designer places model Shalom Harlow on a revolving platform in a plain tulle dress in his 1999 show "No. 13," then has two robots spray yellow and black paint on her as she turns and turns. It was a mesmerizing effect that brought McQueen himself to tears.

The film is divided into chapters, each focusing on a particularly influential McQueen show. The first, "Jack the Ripper Stalks His Victims" in 1992, was originally his final project at Central Saint Martin's, the well-known London fashion school.

Even getting to the school was unlikely. The young Lee McQueen (he reverted to his middle name, Alexander, later because it sounded posh) was supposed to become "a mechanic or something," but he was obsessed with drawing clothes. His mother encouraged him to knock on doors on Savile Row for an apprenticeship, and there, he became a superb craftsman.

At first, there was no money. A friend describes how the two went to McDonald's after a major show, dropped the food on the floor, but had to pick it up and eat it because they couldn't afford to buy more.

Things changed radically when luxury conglomerate LVMH hired McQueen for Givenchy. But McQueen didn't just sit back and enjoy his financial windfall — he poured it back into his own label. It was a time of enormous pressure; McQueen says in one interview that he produced an astounding 14 collections in a year.

For a man often called the "bad boy" or "enfant terrible" of fashion, there was much else to learn about McQueen, the filmmakers say. Among the things that surprised them: his sheer technical craftsmanship, and a constantly developing business savvy.

They were also struck by how McQueen's personality contrasted with the myth. "He had this reputation for being abrasive, punk," says Ettedgui. "But what we see in the archive is McQueen with friends, with his parents, even his beloved dogs, being very human and very tender at times."

At the end of his life, two deaths devastated McQueen. Blow took her life in 2007 — we see him at her funeral, looking destroyed. And in early 2010, McQueen's beloved mother died. Only days later — on the eve of her funeral — the designer killed himself.

The filmmakers can only speculate why McQueen, who struggled with drug use, took his life.  "Fashion does come with a very unique set of pressures," says Ettedgui. But, he adds, "People we spoke to said, 'Don't try to make him a victim, because ultimately the person who put the most pressure on McQueen was McQueen."

Bonhote also notes the designer's ambivalence about the world he had chosen, clearly expressed in shows like his famous 2001 "Voss," in which he forced the assembled fashion world to literally stare at itself for long minutes into a mirrored cube — which in turn represented an insane asylum.

"To some degree, he was always a misfit in the world he found himself in," Bonhote says.