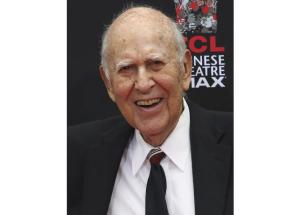 Ask 12-time Emmy Award winner Carl Reiner how it feels to be nominated again, and he fires back a wisecrack.

"I'm impressed with myself," says the droll, 96-year-old creator (or "96 and a half," per his exacting count) of the TV classic "The Dick Van Dyke Show."

Is he excited at all about the possibility of nabbing yet another trophy at next month's ceremony? Reiner is nominated as host-narrator of "If You're Not in the Obit, Eat Breakfast," a documentary about how perennial high achievers, including Mel Brooks and Tony Bennett, both 92, stay vibrant.

The comedy mastermind refuses to turn serious. He mock-complains that a baker's dozen Emmy trophies couldn't be evenly divided among his four children as part of their inheritance.

The patriarch can be forgiven for not dwelling on his prime-time Emmys, a varied lot of honors for writing, directing, acting and performing that stretch from a 1957 acting award for Sid Caesar's variety show "Caesar's Hour" to 1995, when he won for a guest star turn in "Mad About You." As a moviemaker, Reiner collaborated with top talent including Steve Martin in comedies including "The Jerk" and "The Man with Two Brains."

Reiner, the oldest-ever Emmy nominee, is willing to look in the rearview mirror, but only to fuel new work.

"When I finish anything, I have to start a new project or I have no reason to get up. Most people are that way — if they have something to do, they hang around," said Reiner.

Non-fiction books that tend toward part-memoir, part-research are his chief focus these days, with titles including "I Remember Radio" and "Approaching Ninety-Six: The Films I Love Viewing & Loved Doing." Reiner's work in progress is "I Remember Television, Which When I'm Awake I Never Don't Watch."

What are his programs of choice?

"Anything on the news that will tell me maybe (Donald) Trump will go," said Reiner, whose daily routine includes posting a tweet critical of the president and his policies.

For sheer entertainment, he picks older films including favorite "Random harvest," a 1942 romance starring Greer Garson and Ronald Colman that he strongly urges any movie fan to watch.

Reiner is nonchalant when asked about a campaign to get him recognized by Guinness World Records as the oldest Emmy nominee. But he eagerly shares his theory on why some people are funny. It's environment — being exposed to humor as a youngster, as he was to the Marx Brothers and other comic luminaries — and simple biology.

"You're born with a funny bone. Some people have it, some people are very serious."

The Emmy Awards will air Sept. 17 on NBC.