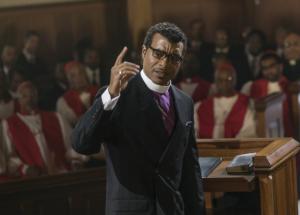 This image released by Netflix shows Chiwetel Ejiofor in a scene from "Come Sunday," debuting on April 13. (Tina Rowden/Netflix via AP)

If Pablo Picasso had a blue period and the Beatles went through a psychedelic phase, then Chiwetel Ejiofor is currently going through his religious period.

The Oscar-nominated star of "12 Years a Slave" has gone from playing Peter the apostle in the upcoming biblical drama "Mary Magdalene" to playing a contemporary Pentecostal pastor in the midst of a religious crisis in the Netflix drama "Come Sunday." Could this be pure coincidence?

"Who knows? Perhaps," the British actor says, laughing. "Certainly I have been having to engage very, very heavily with faith and religion and Christian faith, specifically."

The back-to-back religious-themed projects have left the actor — raised a Roman Catholic, who drifted from the church in his teens — with a new perspective on faith.

"Honestly, I had very limited engagement with it when I was growing up. But it's been really powerful to reconnect," he says. "Inevitably, you see faith differently."

In "Come Sunday," Ejiofor explores the fall from grace of renowned Oklahoma evangelical Carlton Pearson, who comes to believe that there is no such thing as hell. The implications are shuddering for that branch of faith: Without hell, everyone is saved, regardless of belief or behavior. There's no need to go to church at all.

"Whether or not somebody individually believes in hell or doesn't is just a simple personal decision of limited consequence to the outside world. Obviously it's important to that person. But if you're a preacher and you're preaching that there's no hell, well, that's a very, very different thing," Ejiofor says. "It's heresy."

Viewers watch the anguish that Pearson endure, caught between church doctrine and his own beliefs. The bulk of his flock leave and he is forced to downsize his life. Ejiofor compares Pearson's journey to that of a Shakespearean tragedy and commends the preacher for "a very certain, very specific kind of bravery."

"It was just a very powerful push and pull, a very powerful sort of torment," he says. "That was what the story represented to me — a man finding out how to think differently."

Ejiofor, who has played everything from Mordo in "Doctor Strange" to an astronaut in "The Martian," spent time getting to know Pearson during a visit to Tulsa, flying there right after his work on "Mary Magdalene" was finished. "That plane ride was 2,000 years," he jokes. "It was a good way of embracing both the start and the contemporary versions of the same principles. It was kind of eye-opening."

Director Joshua Marston, who wrote and directed "Maria Full of Grace," says he knew Ejiofor would be perfect in the role before filming even began when the actor appeared on the set dressed in Pearson's suit, jewelry and shoes.

"He was reciting dialogue from sermons in the script that he already had begun to commit to memory and was already inhabiting the character," Marston says. "That was the moment where I and the cinematographer and the whole crew's jaw dropped because it felt like suddenly the character was coming to life."

The final film is melancholy and moody, often capturing the actors in stillness and deep reflection. It's an adult movie about big ideas that's not interested in pandering or ridiculing religious audiences.

"I think we can be in danger of not understanding each other because we're not connected to these very, very strong religious and philosophical links in the way that we think."