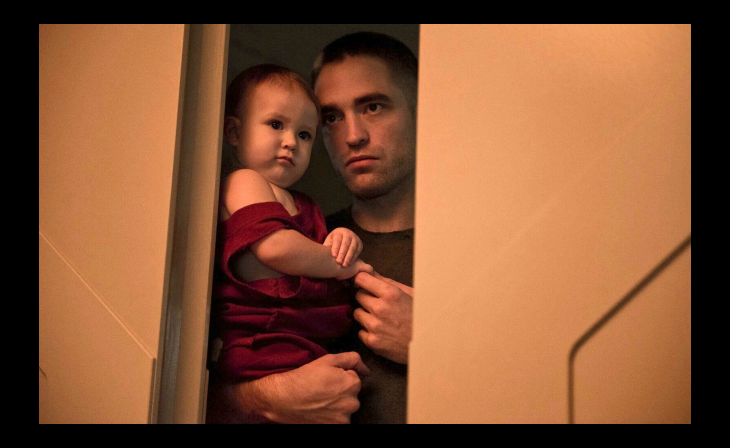 This image released by A24 Films shows Robert Pattinson in a scene from "High Life." (A24 Films via AP) 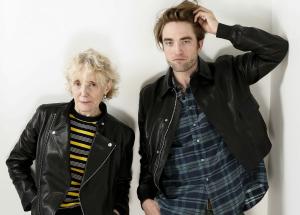 Claire Denis was guiding Robert Pattinson through a black hole.

The two were on a sound stage in Cologne, Germany, shooting a scene from Denis' space oddity "High Life," while the revered French filmmaker called out descriptions ("Now it splits into a pancake!") of the time-warping imagery Pattinson's character, Monte, might be seeing. Pattinson was having a hard time keeping it together.

"I was literally crying laughing. Everyone else was completely serious and I just had tears streaming down my face," Pattinson recalls. "Splits into a pancake? I was like, 'What are you talking about?'"

As willing as Pattinson has been to be stretched and contorted by some of the most adventurous directors in film, "High Life" — a cosmic conundrum pulsing with bodily fluids and the infinitude of loneliness — is a new frontier for him. The same could be said for Denis, the enigmatic and revered filmmaker of "Chocolat" and "Beau Travail," who is making her English-language debut in "High Life."

Together, they are a curious, fascinating match that despite their vastly distant origins seem to buzz to a similar frequency.

"I am lazy. I would love to be in bed all the time, to read, to swim, to do nothing. And yet making films is the best thing that happened in my life, with love and sex," says Denis. "There is something special in making movies, especially for a very lazy person. If I was a very performative person, very active, I wouldn't care about making movies. Movies are made for people who want to do nothing."

Pattinson, sitting alongside the director in the Manhattan offices of the film's distributor, A24, cackles with delight. "I like that," he giggles. "No, I agree. I couldn't agree more."

Yet it took a lot of effort to bring them together. Pattinson first sought a meeting with Denis after seeing "White Material," her 2009 film about a coffee plantation in an unnamed African country torn apart by war and colonialism. It was several years later that Pattinson landed a face-to-face, in Los Angeles.

"My agents didn't really see the importance that I had put on it. So when the meeting came through, I was like, 'Whaaaat?'" says Pattinson, turning to Denis. "You could have been a total (expletive) and I still would have wanted to do the job."

"I am a total (expletive,) by the way," Denis replies. "I was impressed how simple it was to meet with him. How gentle it was. Now, I cannot imagine anyone else as Monte but Robert. Suddenly the film changed. That's it."

When Denis finished the script to "High Life" with Jean-Pol Fargeau, the lead role called for a man in his 50s. "High Life" is about a space ship, flying far outside the solar system, populated by a group of convicts plucked from death row. They are guinea pigs for experimentation on black holes by Dr. Dibs (a long-haired Juliette Binoche), who's really using them to try to incubate a baby.

"High Life" wouldn't be made for several more years after their first meeting, a time during which Denis made "Let the Sunshine In," with Juliette Binoche, and Pattinson continued his streak of far-flung indies ("The Lost City of Z," ''Good Time," ''Damsel"), begun with David Cronenberg's "Cosmopolis." It's been a startling art-house plunge for the actor, one that has surely blown the minds of many a "Twilight" fan.

Like those films, Pattinson leapt into "High Life" purely on faith in the director.

"I remember reading the treatment for the first time and just having no clue. It's so nice to commit to something knowing you're a completely empty vessel at the beginning," says Pattinson. "When I was younger, you'd go into to start something and think every single scene needed to be worked out."

Pattinson, 32, tends to elicit grins from Denis, 72, when he speaks of his youth like a distant past. After the actor says he was happy it took years to make "High Life" — "I was quite young when we first met. I think I was like 28" — Denis replies, "Yeah, you look so old now."

"I think I actually got bigger or something," says Pattinson. "When I saw the movie, it was one of the first times I was like, 'Oh, it looks like an adult.'"

If it wasn't already abundantly clear, "High Life" is not your typical science fiction film. Denis doesn't even consider it one.

"A lot of science fiction films are about conquest. In that void, that huge universe, there's not many things to fight, unless you do 'Star Wars' and there's an alien living there. But of course this was not the point," says Denis. "Even though I like those stories, I would not have been able to do it for many reasons. My imagination, maybe, and the budget, of course."

"High Life," which expands in theaters nationwide this Friday, is instead about a lot of the things that have coursed through Denis' work: violence, sex, colonialism, isolation, helplessness.

"I have absolutely no abstract ideas," Denis says. "I don't know what I do. I try to do my best. For me, I'm trying to make films without concept. Honestly."

Denis instead conceives of movies instinctually and physically. Bodies and movement are everything, as in the shirtless, desert exercises of the Foreign Legion soldiers of "Beau Travail."

"I remember when I was a child the first time I saw a Western with John Wayne, I had never seen a man behaving with his hips like that. I thought, 'Wow, this is something,'" says Denis.

"I don't see only face. I see a complete person, you know?" she continues. "If you think of silent movies or Westerns or a Murnau movie, especially like 'Tabu,' it's so physical. A film that has only talking faces, for me, it's a little bit like TV. Those actors in silent movies were like great dancers. I think it goes well with a movie."

Seeking that kind of holistic acting was part of what drew Pattinson to Denis.

"My main thing in any kind of performance is trying to combat self-consciousness," he says. "It's so much to do with using your whole body. I was also kind of scared of doing it, and didn't really know how to use my own body. A lot of the movies I've done before are quite still."

Maybe what Denis and Pattinson most have in common is a desire to be unconstrained by prescribed contexts: genres, attitudes, expectations. Denis, who's planning to reunite with Pattinson for an adaptation of Denis Johnson's "The Stars at Noon," says she's increasingly interested less in even a film's scene-to-scene cohesion and more in capturing moments, untethered and free.

"This is something I feel more and more," says Denis while Pattinson nods. "It's great for the crew and for me. It's great for acting. We are together at that moment. We live the same moment. Otherwise, we are there checking on continuity and the actors are alone, carrying their continuity on their back. It's not fun."

Take, for instance, one such moment on "High Life," when the baby in the film, Scarlett Lindsey, took her first steps.

"For that to happen in a movie!" exclaims Pattinson while Denis sighs appreciatively. "I said, 'Come here, come here,' and the baby literally took her first steps. It felt so amazing. You could even see the expression on her face." 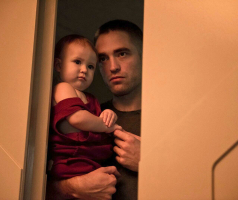 French filmmaker Claire Denis, one of the great living directors, has not lost her edge as she's coasted into her 70s. Her latest film, "High Life," which debuted last fall at the Toronto...