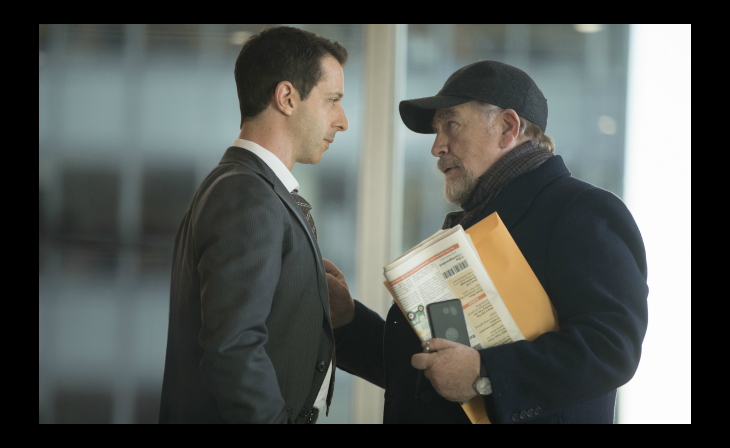 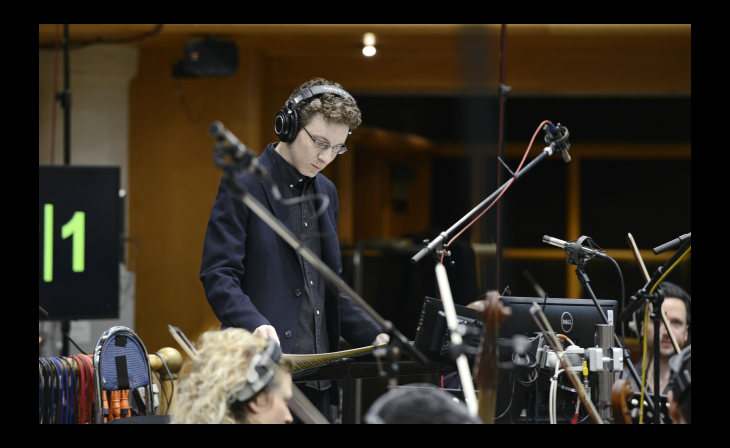 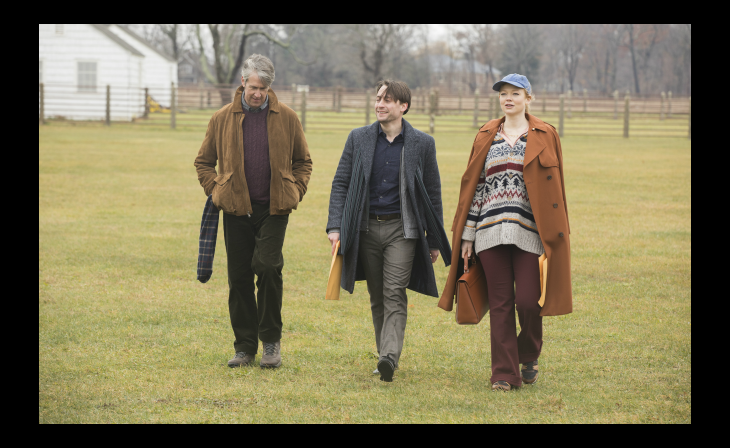 Pictured in this scene from the "Celebration" episode of "Succession" are (l-r) Alan Ruck, Kieran Culkin and Sarah Snook (photo by Craig Blankenhorn/courtesy of HBO)
Prev Next 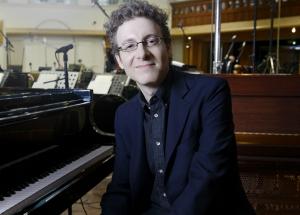 The collaborative relationship with McKay additionally yielded the composer’s first foray into series television: HBO’s Succession which introduces us to the Roy family--Logan Roy and his four children--who control an enormous media and entertainment conglomerate. Succession tracks their lives as they contemplate and grapple with what the future may hold for them once the aging patriarch steps down from the company. McKay directed the pilot episode, “Celebration,” which back in February earned him the DGA Award for Outstanding Directorial Achievement in Dramatic Series Television. Oscar-winning writer Jesse Armstrong (In The Loop) created Succession and penned “Celebration.” The fictional Roy family conjures up thoughts of other power-wielding mass media families from the Murdochs to the Maxwells and the Redstones. McKay said that Armstrong’s original script for Succession was “fabulous,” prompting his desire to direct the pilot.

McKay brought his feature colleague, Britell, onto Succession. The director said of Britell, “He’s one of the most collaborative talents I’ve ever met. He can do anything. He’s classically trained but has done hip-hop. He has the ability to create the sounds necessary for the project in front of him. He doesn’t impose himself on it but there’s always a flavor of Nicholas in what he does. I told Jesse he would love Nicholas. They met and in a couple hours banged out the theme which helped bring a Shakespearian tone to the show, depicting a power family, with a rock music feel hinting at inherited wealth. It had a swing and a groove to it. He got the show immediately.”

Britell’s collaborators over the years, though, extend beyond McKay and Jenkins. The composer’s music was also featured prominently in Best Picture Oscar-winning 12 Years a Slave, for which he composed and arranged the on-camera music including the violin performances, spiritual songs, work songs and dances (Hans Zimmer composed the score for that Steve McQueen-directed feature).

Britell additionally scored the Adam Leon-directed Gimme The Loot which won the SXSW Grand Jury Prize in 2012, Jack Pettibone Riccobono’s documentary The Seventh Fire, which premiered at the 2015 Berlin International Film Festival, Natalie Portman’s directorial debut A Tale of Love and Darkness which was selected for a special screening at the 2015 Cannes Film Festival, and McQueen’s film Caribs’ Leap which was featured as part of the “Master of Light—Robby Muller” retrospective at the Eye film museum in Amsterdam.

Britell has also successfully donned the hat of producer. He produced the short film Whiplash, directed by Damien Chazelle, which won the Jury Award for Best U.S. Fiction Short at the 2013 Sundance Film Festival. Britell subsequently served as co-producer on the feature Whiplash which too won Sundance’s Jury Prize and its Audience Award in 2014. Whiplash went on to earn three Oscars: Best Supporting Actor (J.K. Simmons), Best Achievement in Film Editing (Tom Cross) and Sound Mixing (Craig Mann, Ben Wilkins, Thomas Curley). Britell additionally helped record and produce music for the Whiplash soundtrack, including the songs “No Two Words,” “When I Wake” and “Reaction.”

SHOOT connected with Britell to discuss Succession and his collaborative bond with McKay.

SHOOT: You have a track record of working with Adam McKay. Would you tell us about the nature of your collaborative relationship and how it applied to Succession?

Britell: Adam is a collaborative mind and a friend. I first met Adam just as he was beginning to shoot The Big Short in 2015. The producers of The Big Short, Dede (Gardner) and Jeremy (Kleiner), brought us together. I went out to L.A. (from New York) and lived with the McKay family, in a poolhouse at their property. This started a very deep collaboration which on The Big Short included the incredible editor, Hank Corwin. The experience changed the way I approached film work and by extension in TV with Succession. For The Big Short, Adam and Hank invited me into the edit room. I never had that experience before. I was moment to moment writing music while Hank cut sequences together. We would try out ideas, iterate on a quick level. Hank likened it to us playing jazz together. We would play something right there after they threw out an idea. It was an exhilarating creative process.

Adam and I later worked on the Succession pilot. I started talking to Adam about the show before the pilot got underway. We brainstormed, I was able to come to set during shooting. Adam brought me into the whole production of it in a lot of ways. The time spent where you can digest ideas, brainstorm and experiment I found to be very useful. Now I’ve found it to be essential. Vice and Succession overlapped a bit. I was living in the poolhouse again last year (for Vice). I’m based in New York where Succession was done--but I wasn’t working directly with the editors (like with Corwin on The Big Short and Vice). In New York I worked closely with Jesse (Armstrong) around the time of the pilot, experimenting with different ideas. To be in the same room, to see and hear the same things, to have a dialogue was invaluable. We were on the same page not just about sound but about the feelings and emotional landscapes we want to explore.

Succession was my first TV series. As a kid I loved TV music and themes. The only TV I had done prior was a documentary (Haiti: Where Did the Money Go).

SHOOT: What was (were) the biggest creative challenge(s) that Succession posed to you?

Britell: For me the most exciting challenge was the question of music tonality. I’m fascinated by it. Every project, TV or film, should feel completely its own entity. You try to find a sound that on one hand feels like it’s linked with the material but you also want a sound that hopefully is a bit unexpected to tap into the way in which music can transform your perspective at times. With Succession, the tone was fascinating. One one hand, it’s very serious material, about the concentration of power held by a small number of people, powerful families in the world today.

There’s a gravitas with this story. At the same time, there’s comedy and absurdity.

You have two directions--serious yet also darkly funny and even absurdly funny at times. I would actively talk to Adam and Jesse to make sure I was thinking the right way--what was the story I was trying to tell musically and how would it play with what we were watching? We found that the serious stuff had to be dealt with seriously. But for the absurd moments, by leaving in the gravitas, we found them to be funnier, by playing it even more dark. Sometimes playing funny music makes scenes less funny.

SHOOT: In an earlier interview with SHOOT, Adam McKay referred to the mix of music you used, ranging from a Shakespearian tone to rock and roll. How would you characterize the different music you deployed on Succession?

Britell: There was almost a dark courtly old classical tone to some of the music. But there were different sounds I tried to weave together along with that--other elements like very large hip-hop beats combined with classical elements and a variety of subtle off-putting, strange sounds like out-of-tune bells and weird music. It all added to this complex atmosphere that the show has. What I love about the show is that it is complex--gravitas, humor, absurdity. It’s always doing a bit of a dance between all these different tones, which is why at times I went for a kind of out-of-tune piano occurrence.

SHOOT: What was your biggest takeaway or lessons learned from your experience on Succession?

Britell: The musical architecture of a score has certain ideas introduced and then they are developed and culminate in a film over 90 or 120 minutes on average. On a TV show you have to figure out how that all works over the course of 10 hours of material. What is the nature of that? You have ideas introduced in hour one. How do they exist when you come back in hour nine or ten? While there are a lot of similarities between film and TV scoring, the way in which the ideas are developed are different. The difference in length makes for a different structure. In TV it’s harder to grapple with such a large amount of real estate. The only way is to watch and put yourself in the mindset of the audience as much as possible. Something that works on a micro level is not the same as working in a macro level. With TV it’s more important to think about that varied big picture.

SHOOT: What’s next for you? 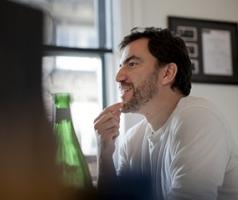 Editor Marco Perez, noted for his work in commercials, short films and documentaries, joined bicoastal Union Editorial in 2009, and was named a company partner in... 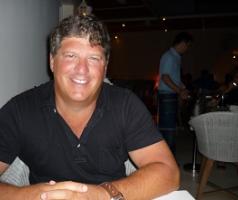 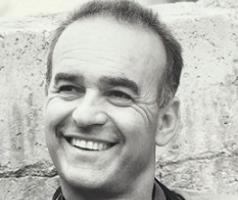 Nick Broomfield is an accomplished documentarian, among his recent plaudits being an International Documentary Association Award nomination last October for ... 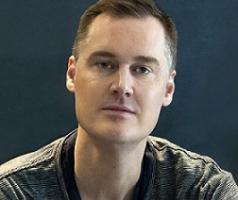 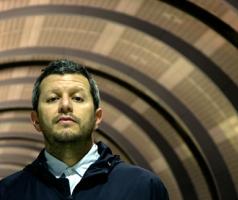 Frank Samuel’s first industry gig was as a P.A. at Corman Studios, a famed spawning ground. He later became an assistant art director, working on such features as...