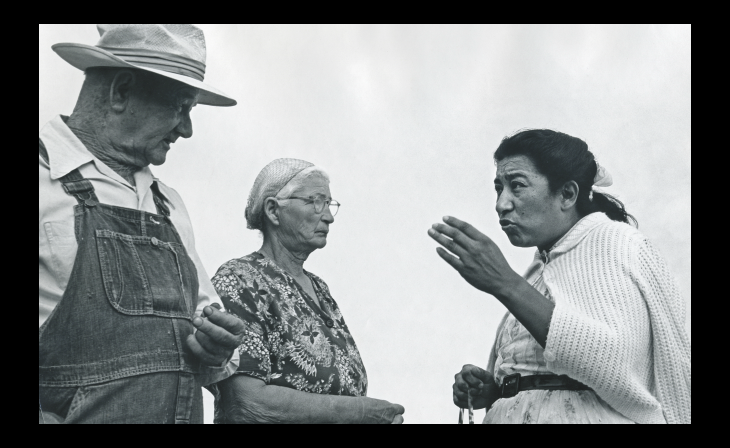 In this undated photo, labor leader Maria Moreno (r) speaks with migrant farmworkers in rural California. A new film dives into the mystery around the Mexican American labor leader who organized farmworkers years before Cesar Chavez and Dolores Huerta and then disappeared from the public eye. (George Ballis/Take Stock via AP) 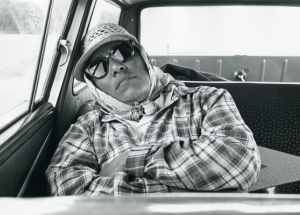 In this undated photo, labor leader Maria Moreno sleeps before speaking with migrant farmworkers in rural California. A new film dives into the mystery around the Mexican American labor leader who organized farmworkers years before Cesar Chavez and Dolores Huerta and then disappeared from the public eye. (George Ballis/Take Stock via AP)

Years before Cesar Chavez and Dolores Huerta began organizing poor farmworkers in California, a woman named Maria Moreno sought to sign up impoverished farmworkers for a fledgling union. The Mexican American mother of 12 coordinated rallies, recruited members in isolated areas and inspired others to demand a living wage.

By 1961, her work was so admired she was sent to a national union convention to address attendees that also heard from President John F. Kennedy and the Rev. Martin Luther King Jr.

Then, Moreno disappeared from the public eye.

"Adios Amor: The Search for Maria Moreno" on PBS examines the life of the obscure labor leader who galvanized poor agricultural workers during the late 1950s and early 1960s. Moreno's work helped set up a farmworkers movement that later would capture the nation's heart, but her whereabouts later in life had remained a mystery to those who encountered her.

Laurie Coyle, the film's director and producer, said the idea for the project began after she found photos of Moreno tucked away in an archive. The images — captured by the late farmworker photographer George Ballis — showed Moreno speaking in front of crowds, organizing workers in the fields of California and racing to other events with her children and husband.

"She had this piercing glaze and always seemed to be surrounded by children," Coyle said. "I couldn't help but to be captivated."

With little information to go by, Coyle began investigating Moreno's life and discovered radio journalist Ernest Lowe had followed Moreno during her activist days. He, too, had been enchanted by Moreno.

Born in Karnes City, Texas, to a Mexican immigrant father and Mescalero Apache mother, Moreno and her family had been migrant farmworkers for years, following the crop in Utah, California, Arizona and Texas.

Coyle also found out that Moreno started her union activism following an April 1958 flood that forced many farmworkers into near starvation. One of her sons went blind temporarily due to starvation, reporters and family members said.

"How do you think that I feel ... seeing my son blind only because we don't got nothing to eat?" Moreno said in one passionate speech. "(Meanwhile), some other tables are full and wasting food."

She became active in the Agricultural Workers Organizing Committee, a fledgling union sponsored by the AFL-CIO, gaining broad support from Oklahoma migrants, Filipino American workers and Latino pickers. "It was so unusual for a woman like her back then to be in this position," Coyle said.

Speaking invitations started pouring in after Moreno's reputation grew as a tireless organizer and a hypnotic speaker.

"The first time I understood that she was somebody different was when she went to (University of California,) Berkeley," Martha Moreno Dominguez, her daughter, said in the film. "I realized who my mother really was ... I said, wow, you know. Here's my mother, a second grade education doing this."

But union infighting and jealously eventually forced her out in 1962. Documents show an AFL-CIO official accused her of misspending and she was forced out of leadership.

"She wasn't afraid to say whatever she had to say," said Gilbert Padilla, co-founder for the United Farm Workers. "I assume that's why they got rid of her."

When Cesar Chavez began looking into forming his own farmworkers union, he declined to ask Moreno to join his effort, seeing her as "big mouth" and possible rival, Coyle said, citing a letter and interviews.

Coyle said Chavez probably viewed her Pentecostal beliefs in contrast to his Catholic upbringing. "There may have been some sexism involved, too," Coyle said.

The Agricultural Workers Organizing Committee and the Chavez-led National Farm Workers of America merged their organizations in 1966.

Moreno's children say she left California and stopped in a remote part of the Arizona desert 100 miles (161 kilometers) west of Phoenix and asked God for guidance.

She eventually became a Pentecostal minister along the U.S.-Mexico border in San Luis, Arizona, and sought to transform society one soul at a time instead of focusing on systemic change.

The film, a presentation of VOCES, is slated to premiere Friday on most PBS stations.