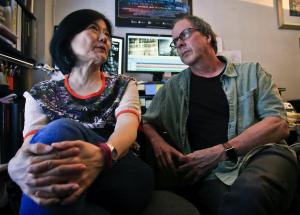 In this May 15, 2018 photo, filmmakers Li-Shin Yu, left, and Ric Burns discuss their new PBS documentary "The Chinese Exclusion Act," during an interview, Tuesday May 15, 2018, in New York. (AP Photo/Bebeto Matthews)

Politicians seizing on immigrants as an election issue. Newspaper headlines calling for action. Talk of legislation to institute a ban.

If viewers of "The Chinese Exclusion Act" documentary end up with a sense of deja vu between the film's subject, a law from 1882 that barred Chinese people from coming to the United States, and current events, that's pretty much the point, according to its filmmakers.

"The 'A-Ha!' for anybody coming to it ... is oh, there's a history to how we have decided who can come and when they can come, who's a citizen and who's not a citizen," said documentarian Ric Burns, who made the film with Li-Shin Yu. It airs on the PBS television series "American Experience" on Tuesday.

The Chinese Exclusion Act was America's first and only immigration act that barred people from a specific country from coming to the United States. After its initial enactment for a 10-year period in 1882, it was regularly renewed and then made permanent in 1904. It was finally repealed in 1943.

Making the documentary was an eye-opening experience for Burns and Yu, who had never heard of the law and believe most of the American public isn't aware of it either, but should be.

The documentary, which Burns and Yu initially started several years ago, starts several decades before the law's enactment on May 6, 1882. The Chinese had started coming to the West Coast, primarily California, in the middle part of the 19th Century, drawn by the possibilities of the California Gold Rush and looking to escape the unrest in China in the wake of the Opium Wars over the West forcing China to open to trade.

They became targets of prejudice by white miners and other Californians as gold became more difficult to come by, as well as politicians appealing to nativist sentiments and those concerned immigrants were depressing wages. But they were also vital labor in the building of the Western half of the transcontinental railroad, forced to work for lower pay and in worse conditions that white workers.

The documentary shows how, even though estimates put the Chinese population at about 100,000 or so when the overall country's population was about 50 million, there was a rising sentiment that the Chinese were a problem. That lead to local laws around the West Coast limiting their livelihoods as well as acts like the federal 1875 Page Act, which instituted regulations on women attempting to come to the United States from China that were onerous enough that they were almost completely excluded. There were also acts of violence, like the October 1871 massacre in Los Angeles, when a mob went to Chinatown and 18 Chinese immigrants were killed, many of them lynched.

When the exclusion act was passed, it prohibited most Chinese workers from coming, and preventing Chinese already here from ever becoming naturalized citizens.

But the anti-Chinese sentiment already stoked in the U.S. didn't abate with the law, and the documentary shows how acts of violence continued to be perpetrated against Chinese communities, as in the Snake River massacre in 1887, where almost three dozen Chinese miners were killed in Oregon.

The documentary also shows how Chinese immigrants and the next generation of Chinese Americans born in the United States fought back, filing thousands and thousands of lawsuits in the courts to push back against the limitations of the laws they were living under.

Some of the cases established principles that Americans now take for granted and assume have been part of the country since its founding, Burns said. He pointed to the case of Wong Kim Ark, born in America to Chinese immigrant parents. He was returning to the U.S. after a visit to China and was barred from re-entry. His case went to the U.S. Supreme Court, and the judges decided that he was a citizen because of being born here, in accordance with the citizenship clause of the 14th Amendment, thus clarifying the precedent for birthright citizenship, regardless of whether a person's parents were citizens.

"The Chinese who came here and Chinese Americans saw more clearly what's best about our system and helped secure it," Burns said. "Every American who is born here assumes they're American because of something Thomas Jefferson wrote, not that Wong Kim Ark took his case to the Supreme Court."

With immigration a current hot-button issue, Burns and Yu hope the documentary gives viewers a clearer sense of America's immigration past, away from the romanticized notion that the country has always opened its arms to people from other nations, so that issues of today can be grappled with more accurately.

Americans are attached "to an idea of a kinder, gentler understanding of an American past," Burns said. "That kinder, gentler past, if it's wrong, isn't going to help you steer accurately in the present and the future."