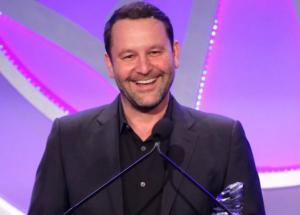 Dan Fogelman, creator of “This Is Us,” accepts Television Showman Of The Year Award onstage at the 55th Annual ICG Publicists Awards on Friday, March 2, 2018 at the Beverly Hilton Hotel in Beverly Hills, Calif. (Photo by: Mathew Imaging, @mathewimaging and @icglocal600)

The lnternational Cinematographers Guild (ICG, IATSE Local 600) Publicists announced and honored winners of its 55th Annual ICG Publicists Awards at the Beverly Hilton Hotel. Get Out (Universal Pictures) won the top honors for Best Publicity Campaign for Motion Pictures, and Stranger Things 2 (Netflix/Wonder View) earned distinction for the Best Publicity Campaign in Television. This year’s luncheon, which traditionally occurs the week leading up to the Academy Awards®, was chaired by Henri Bollinger and co-chaired by Tim Menke. More than 900 industry leaders attended including guild members, Hollywood public relations and marketing executives, producers, studio and network executives, celebrities and press.

Actress and comedian Cloris Leachman, co-star on The Mary Tyler Moore Show and longtime friend, accepted a Lifetime Achievement Award on behalf of legendary actress Betty White, who could not be present. Actor/director Andy Serkis (Black Panther, War for the Planet of the Apes, Star Wars: The Last Jedi), who flew in from England for the event, was presented with the Motion Picture Showman of the Year Award by director Matt Reeves (Dawn of the Planet of the Apes, War of the Planet of the Apes). Dan Fogelman, creator and executive producer of This Is Us, received the Television Showman of the Year Award presented by This Is Us actor Milo Ventimiglia.

In his acceptance remarks, Fogelman observed that in this “dark, weird time,” he finds it gratifying that This Is Us, a show which “wears its heart on its sleeve,” reflects that we all have much in common with one another and can all universally relate to loss, joy, the responsibilities of parenthood, being brothers, sisters and friends. Fogelman affirmed that we “may not be as divided as we think.”

A special award honored the Hollywood Foreign Press Association (HFPA) celebrating the 75th anniversary of the Golden Globes, and was accepted by Meher Tatna, HFPA president. ICG president Steven Poster, ASC surprised Awards chair Henri Bollinger with an IATSE Gold Card, the highest honor that can be bestowed upon a member of IATSE, in recognition of his dedicated service for over 55 years, including Awards chair for 35 years. The ICG Publicist Awards Directory was dedicated to the late famed American gossip columnist Liz Smith. ICG national executive director Rebecca Rhine spoke about the importance of being a role model for women and said, “Local 600 believes workplace safety must include being safe from bullying, harassment and abuse.”

THE WINNERS OF THE 55th ANNUAL ICG PUBLICISTS AWARDS ARE:

Les Mason Award, the highest honor publicists can bestow on one of their own
JAN CRAFT

Category:
News
Tags:
ICG Publicists Awards
This is Us
Get Out
Stranger Things 2