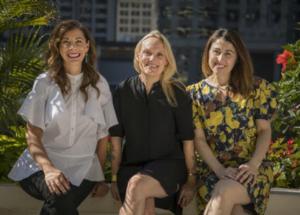 “In naming a new CCO, our priority was to make sure we are igniting the creative culture that is alive and well at Leo Burnett. No one is better positioned for this than Jordan,” Montgomery said. “Jordan’s open approach to creativity helps deliver great work from big, integrated teams and brands. She is a true partner and is the evolution of what a creative leader needs to be in today’s environment.”

As CCO, Doucette will continue leading the creative for her marquee clients, as well as oversee the Leo Burnett Chicago creative and production departments. She will also work in close partnership with Taylor.

“What attracted me to Leo Burnett is that it’s a creative solutions company that is continually transforming how we work to bring the best, most effective ideas to the table,” said Doucette. “I’m most excited that this role will help me get closer to our clients and our teams to help shape not only the work, but how we work.”

Doucette joined the agency in January 2018 and has been at the helm of Kraft Now Pay Later, All Together Cereal and Kraft Salad Frosting. Previously, she was chief creative officer of TAXI in Toronto leading award-winning work for blue-chip clients including Pfizer (Centrum, Advil and Robax), Canadian Tire, Mark’s, Fido Telecommunications, MINI Cooper, Vancouver Aquarium and BC Hydro.

Doucette and her teams have been recognized with wins at major industry award shows including the Cannes Lions International Festival of Creativity, The One Show, the CLIO Awards and the CASSIES.

Active in the industry, Doucette was a judge for The One Show in 2019, Cannes in 2017, and has participated in programs such as the Google WomenWill Program and podcast series, and the Cannes See It Be It panel. She has also served on the board of the Advertising and Design Council of Canada, which works to inspire creativity and encourage the highest possible quality of work in the country.