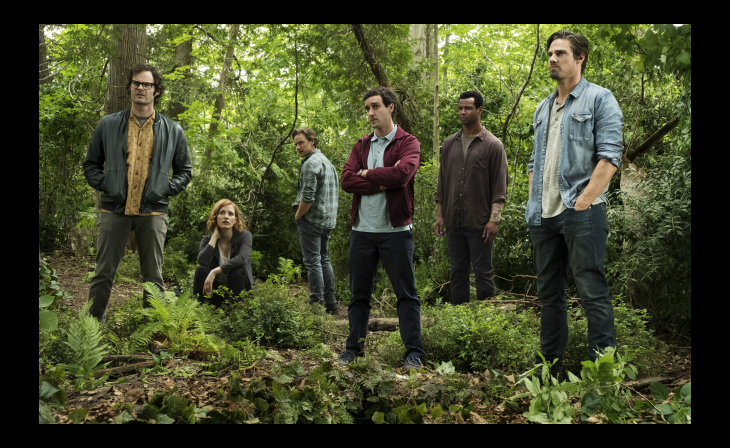 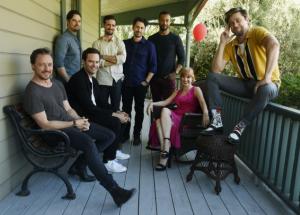 It's a weekday morning in Los Angeles and three "losers" — Bill Hader, James Ransone and Andy Bean —are sitting around a bright juice shop with a view of the ocean discussing babies, surf lessons and trips to Hawaii over iced coffees and eggs. It is a scene that's far too idyllic and nice for the movie they're promoting, "It Chapter Two,' which opens nationwide Thursday night. But after the physically and psychologically taxing five-month shoot, not to mention the pressures to live up to both Stephen King's novel and the first installment, "It," which became the most successful horror movie of all time, they deserve a little bit of a break.

Hader, Ransone and Bean are just three of seven member Losers Club — Richie, Eddie and Stanley — who battled the demonic clown Pennywise (Bill Skarsgard) as kids. They and Jessica Chastain (Beverly), James McAvoy (Bill) and Jay Ryan (Ben) are called on to return to their hometown of Derry, Maine, 27 years later by Mike (Isaiah Mustafa). Pennywise has come back and they made a blood pact to finish the job, even if the ones who left (that is, everyone but Mike), don't remember anything.

"I was so happy to go back," said director Andy Muschietti. "When 'Chapter Two' kicked off it was like going back to school, going back to Derry. Now we're getting to the end and it's bittersweet."

After five straight years of work, there is a kind of ease on his part, finally, thanks to the enormous success of the first film, which earned over $700 million globally from a $35 million production budget. It also won over the critics. That goodwill played a role in recruiting what he describes as his "dream cast" to play the grown up losers for "Chapter Two." Chastain, who'd worked with Muschietti on "Mama," was the first to board, and she put the word out to her frequent co-star McAvoy on the set of "Dark Phoenix."

"I loved the book as a kid and I really enjoyed the movie as well," McAvoy said. "I didn't need convincing. I think my exact words were 'I'll do that in a heartbeat.'"

Hader was actually someone his younger counterpart, Finn Wolfhard of "Stranger Things," suggested in an article, which amused Hader and his agent. But then a few months later Muschietti actually called to request a meeting.

"Finn owns Hollywood basically," Hader said with a shrug. "But I'd never been in a horror movie before and I love these kinds of monster movies. I thought it would be fun."

Beyond McAvoy and Chastain, none of the seven had a close relationship or history, and their chemistry was going to be essential to recreate the magic of the kids' friendship from the first film. So on the first night on location, Muschietti gathered them all for drinks at a place in Toronto to break the ice. Hader remembers walking in and being presented with what he can only describe as "scotch in a smoky orb."

His co-stars jumped in to help. Bean remembered it being a "Dracula-like glass," while Ransone, who everyone calls PJ, offered that it was more like "'Beauty and the Beast' with the rose inside.'

"Andy was like, you must drink this!" Hader said, imitating Muschietti's Argentine accent. "I was like I guess I'm having a drink and I sat down and within two minutes we got real, like super real.

Hader pulled up a photo from the night as proof. And there they were, the soon to be Losers smiling around the table and this smoky scotch glass, a scene that looked equal parts awkward, intense, fun and a little strange. It would be an apt prelude to what they'd all go through together for the next few months in Canada to make the nearly three-hour conclusion to the "It" saga.

The next night they filmed their first scene together: A dinner gathering at Chinese restaurant where the characters meet for the first time in almost three decades.

"I was concerned about how the group would work," Muschietti said. "But it was exhilarating. I saw the chemistry happen in front of my eyes."

Ryan added that there another element to the bonding. Three nights of 7pm to 7am shoots led to "some hallucination going on too," Ryan recalled.

Chastain even found herself getting the giggles watching Hader improvise a scene with a young kid. Look closely and you might just catch her with a smile on her face. It was the only take they could use.

"Andy told me that in many of the takes he couldn't find me," Chastain said. "I was hiding because I was laughing so much."

Overnight shoots and 18-hour days and strobe lights were not uncommon during the grueling few months (that included some karaoke breaks), nor were some minor injuries. One who avoided the scrapes and strains of the others, however, was Mustafa.

"I was the one cast member who was stretching before," Mustafa said. "I came from a fairly physical TV show and also played in the NFL. I know better. You need to warm up."

But he also said that psychologically, he was haunted throughout the production (thanks in part to reading some 14 Stephen King books during filming) and didn't fully unplug from the experience for another eight months.

Chastain had one day where she had to be submerged in blood, which was tough enough, but she didn't realize that it also meant that for the next month, she had to be doused daily with the cold fake blood to keep up the continuity.

"There was a lot of empathy for Jessica on the set," Ryan said.

Chastain quipped back: "No there wasn't: There was a lot of teasing!"

(According to Ryan, most of that teasing came by way of Hader.) But they were all in the trenches together, and they've come out of the experience as friends too. Now it's just a matter of getting the film out to the world for the final test. As for whether or not they're nervous that it'll live up to expectations?

"That's like thinking while you're driving, 'Is my car going to fall apart?'" Hader said. "You just kind of have to do it."

Not a dissimilar philosophy to taking down an evil supernatural clown.