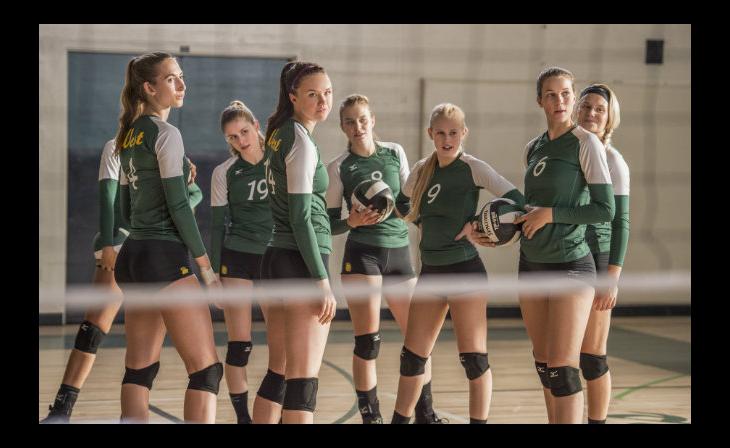 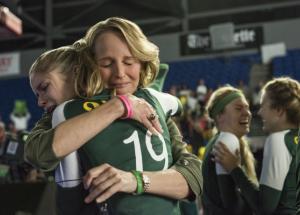 In this image released by LD Entertainment/Mirror, Erin Moriarty, left, and Helen Hunt appear in a scene from "The Miracle Season." The film follows the true story of Iowa City’s West High volleyball team, which reached the state championships after the death of teammate. (Cate Cameron/LD Entertainment/Mirror via AP)

Cast members of "The Miracle Season" say the film's female-empowerment message couldn't have come at a better time.

The movie follows the true story of Iowa City's West High volleyball team, which reached the state championships after the death of teammate Caroline "Line" Found.

Erin Moriarty, one of the stars of the film, says the theme of women working together to achieve a goal is particularly important in the era of #MeToo, with women in Hollywood and elsewhere organizing to eradicate sexual misconduct.

"I feel like the movement with what's going on in Hollywood right now, in addition to this film, kind of really emphasizes the concept that if we're all in it together, life is going to be so much easier," said Moriarty. "And we've got to assume these roles of strength that are equal to men."

Danika Yarosh, who also stars in the movie, is optimistic about workplace parity in Hollywood and beyond.

"I think a lot of Hollywood is going through a change right now, especially with representation," she said. "There's more females going into the workforce and being recognized, and I think that's really, really great, and I'm excited to see what this next year and the years after that will bring."

Helen Hunt, who plays the coach of the team, says the message behind the movie hit home after filming started in Vancouver, Canada.

"I didn't realize when I took the job what I was going to be doing on that level. I just loved the director (Sean McNamara) and I thought it seemed like a good part and would be a beautiful place to shoot. But I remembered very clearly standing on this volleyball court, looking around at these beautiful souls staring at me like I'm supposed to know what to say to them, and luckily a really good writer told me to say, 'I love you and recognize what you did and have joy.' It was pretty perfect," she said before a special screening in Los Angeles recently.

Hunt said her teenage daughter was inspired by spending time with the film's young stars.

"Being around sweet, lovely women following what they want to do ... it was a beautiful way to spend a summer," she said. "They all came around her like fairies in the woods. It was pretty beautiful."

Moriarty hopes "The Miracle Season" will open the door for more female-driven stories in Hollywood.

"I don't like that this film is the anomaly right now — that we have this movie coming out about female athletes at such a young age and it's rare. But I'm happy that we're getting out there and I hope that this catalyzes more stories like that," said Moriarty.

"The Miracle Season" opens in the United States today (4/6).