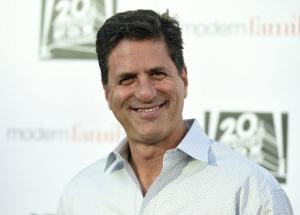 In this May 3, 2017 file photo, Steve Levitan arrives at the "Modern Family" FYC Event in Los Angeles. (Photo by Jordan Strauss/Invision/AP, File)

"Modern Family" co-creator Steve Levitan raised the possibility of no longer working with the 20th Century Fox television studio after tweeting his disgust with Ingraham's remarks. The Fox News Channel primetime host tried to walk back her remarks even before her show concluded Monday night, but the damage had already been done.

Seth MacFarlane, creator of Fox's "Family Guy," donated $2.5 million this week to National Public Radio and Southern California Public Radio's newsgathering efforts. On Sunday, MacFarlane tweeted that he was "embarrassed to work for this company" after pointing to a remark by Fox News' Tucker Carlson that viewers should assume the opposite of what major news stations reported.

Hollywood producer Judd Apatow challenged more Fox stars and executives to speak up and "make a huge difference in this national debate" about President Donald Trump's immigration policies. Paul Feig, a filmmaker who's done films for 20th Century Fox, posted Tuesday that he can't condone the support of Fox News "toward the immoral and abusive policies and actions taken by this current administration toward immigrant children."

Hollywood types aren't exactly the favorite of Fox News Channel personalities or viewers, but the developments could have business implications. The ownership of the 20th Century Fox television and film studios, which are sister companies to Fox News, are currently up for grabs, the subject of a bidding war between Disney and Comcast.

Ingraham made her remark while defending the Trump administration's policy of separating children from parents of families caught illegally trying to cross the border into the United States.

"Since more illegal immigrants are rushing to the border, more kids are being separated from their parents and temporarily being housed in what are essentially summer camps" or facilities that look like boarding schools, she said in the opening monologue of Monday night's show.

Shortly before her hour-long program ended, Ingraham had apparently gotten word that there was a social media backlash to her "summer camps" remark. In a description of one of the facilities in Texas on Sunday, the Associated Press reported that hundreds of children were waiting in a series of cages created by metal fencing.

Ingraham, who has three adopted children, including one from Central America, suggested that people concerned about Trump's policy "take care of them the right way. Open your hearts and homes to them."

In a statement, Fox News said that Ingraham's "very personal, on-the-ground commitment" to children in need speaks for itself, as does her belief "in a commonsense, legal immigration system, which will continue to be a focus of her show."

Fox News won't "tolerate or give in to attempts to silence diverse viewpoints by agenda-driven intimidation efforts," the statement said.

Levitan linked to a report about Ingraham's summer camp comment in a tweet that said, "let me officially join Seth MacFarlane in saying I'm disgusted to work at a company that has anything whatsoever to do with Fox News. This (expletive) is the opposite of what 'Modern Family' stands for."

In tweets later on Tuesday, Levitan suggested he would no longer work for 20th Century Fox after the current "Modern Family" deal ends in a year. But his agent later put out a statement saying Levitan was taking a wait-and-see attitude about that.

"There are statements on the left and the right that kind of fire up their base, but it doesn't really help out," he said. In many cases, it's an attention-getting device. Some Trump supporters have described children being held in detention facilities as "child actors." Meanwhile, Ingraham on her show aired quotes from Trump opponents that described the policy as "child abuse" and said Trump was essentially creating orphans.