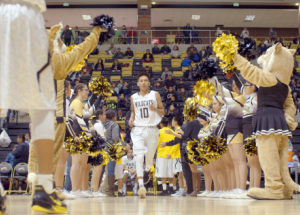 This image released by The WorkShop shows a scene from "Basketball or Nothing," a new docuseries that examines the hoops dreams of a rural, Arizona town in the heart of the Navajo Nation. The six-episode series debuts Friday on Netflix. (The WorkShop via AP)

High school basketball fans in Arizona and New Mexico likely know all about "rez ball" — a run-and-gun, pass-cut-and-shoot style of play popular in Native American communities. The style excites fans and allows teams without big centers to wear down opponents by running them off the court with speed and strong shooting.

The best practitioners of rez ball help build community in some of the most isolated towns in the American Southwest. Fans travel for hours to see the games, while others listen to radio broadcasts spoken in Native American languages.

A new Netflix docuseries "Basketball or Nothing" examines the hoop dreams of one such team from a rural, Arizona town in the heart of the Navajo Nation.

The series, set to debut Friday on the streaming service, follows the Chinle High School boys' basketball team as its seeks to capture the community's first state title. But to get there, the players must battle normal teen pressures and the realities that surround them in the nation's largest Native American reservation.

Through the eyes and words of Wildcats coach Raul Mendoza and his players, the series documents how their isolation and experiences in one of the poorest regions of the country have shaped them. The teens speak on living in homes without basic services. Filmmakers show them traveling for hours across the state for games and returning home after midnight while resting on cold bus windows.

Basketball is a diversion, team member Josiah Tsosie says, but also a chance to hope. "We always dream big," he tells filmmakers.

At practice, the players imitate the moves of Golden State Warrior point guard Stephen Curry or then-Duke standout Zion Williamson, who would become the No. 1 pick of the 2019 NBA draft.

But will the team overcome its past of never achieving a basketball state title for the town of 4,500 people?

Can Mendoza, a member of the Tohono O'odham tribe in Arizona, convince his young men to suppress their disadvantages and focus on perfecting their advantages — for the season and life?

"There's really nothing going on in Chinle," die-hard fan Mo Draper says in the opening of the series. "(There're) no clubs, no dance, no movie theatres. There's really no outlet for the kids or the adults."

That's why Chinle basketball is an addiction, Draper said, but one that brings happiness.

Or pain if the team sees another losing season.

PGA golfer Rickie Fowler, who served as an executive producer and whose grandmother is Navajo, told The Associated Press that he joined the project to show audiences the obstacles high school students face on the reservation.

"It was something for me to give back to my Navajo side," said Fowler, who grew up in California. "But I also wanted to show the hardship of what the rez is all about (and) bring awareness...it will be eye-opening."

Co-director and executive producer Matt Howley said he got the idea for the film after watching an online video about rez ball and reading a New York Times profile on Mendoza.

Yet, he didn't want to be another outsider coming into a Native American community with assumptions and stereotypes. So, Howley and the film crew opted to skip a narrator and only allow the people of Chinle to speak.

"It was important to let them tell their own story," Howley said.

To do that, filmmakers had to stop shooting for a while and gain the trust of the players, Howley said. "After a week or two," the players allowed filmmakers inside their homes.

The docuseries couldn't escape issues of life on the reservation: poverty, health care, addiction. However, Howley said he left it up to the players and their coach to discuss the subjects.

Fowler said the realities of the reservation are often on his mind when he's traveling around the world to compete in golf majors. "It's a part of who am I," said Fowler, who helps out golfer Notah Begay III with his foundation to tackle Native American obesity and type 2 diabetes. Begay is Navajo, San Felipe and Isleta.

In the first episode, Mendoza races to prepare the players for their opening game against a taller Snowflake, Arizona, team. The Wildcats have to travel two hours to get there.

"Don't take the first shot they give you," he tells them during the game. "Take the shot you want."

It's an ongoing theme he will stress throughout the series. Play rez ball but with structure, and you'll be in a position to win today. And if you win today, you can win tomorrow.