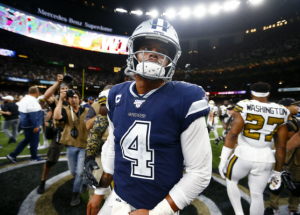 With football in full swing and “The Big Bang Theory” nowhere to be seen, the first week of the fall season had NBC feeling like must-see TV again.

The network that dominated primetime in the 1980s and 1990s won the week in total viewers for the first time in 18 years with an average evening audience of 7.5 million, according to ratings released by the Nielsen company.

CBS, feeling the absence “The Big Bang Theory,” finished second following 10 straight years of winning premiere week. It had an average of 6.9 million viewers. “Big Bang,” long a ratings juggernaut for the network, aired the last of its 12 seasons last year.

NBC won on the back of the NFL, with the matchup of the Dallas Cowboys and New Orleans Saints making “Sunday Night Football” the week’s runaway No. 1 show. Nielsen says the game had 24.1 million viewers, which is more than 6 million clear of the No. 2 show, the Philadelphia Eagles and Green Bay Packers matchup Thursday night on Fox.

NBC also rode the “Sunday Night Football” pregame programming, two episodes of “The Voice” and the season premieres of “This Is Us,” ‘’Chicago Med” and “Chicago Fire.”

CBS had the only scripted shows in the top 10 with the dramas “NCIS” and “FBI.”

The last time NBC won the week in total viewers was 2001. “Friends” was still on the air, one of the few remaining remnants of its Thursday night dominance that began with “The Cosby Show” in the 1980s.

But for both NBC and CBS, the numbers were down from the comparable week last season as viewers continue to seek streaming and other options for viewing.

NBC actually had more average viewers than this year in the first week of fall 2018 — 7.7 million — but that was well short of CBS and its 8.3 million.

Fox used its own football surge to finish third with 5.8 million. ABC was fourth with 4.7 million.

Fox News Channel was the week’s most popular cable network, averaging 2.63 million viewers in prime time as all cable news channels saw a slight uptick in viewership, possibly stemming from news of the impeachment inquiry of President Donald Trump.

ABC’s “World News Tonight” topped the evening newscasts with an average of 8 million viewers. NBC’s “Nightly News” was second with 7.3 million, and the “CBS Evening News” had 5 million viewers.

Below are primetime viewership numbers compiled by Nielsen for Sept. 23-29. Listings include the week’s ranking and viewership.