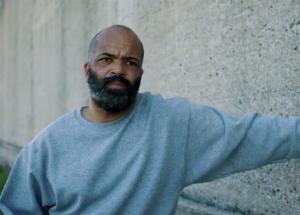 More than 120 incarcerated men and dozens of prison guards play roles large and small in Madeleine Sackler's "O.G.," a drama believed to be the first fiction film ever made entirely within the walls of a maximum security prison.

"O.G.," which recently premiered at the Tribeca Film Festival, stars Jeffrey Wright (whose performance earned a Tribeca jury award as Best Actor in a U.S. Narrative Feature). But its most powerful resource is the authenticity of its high-security setting and its incarcerated co-stars. Sackler made "O.G." at Indiana's Pendleton Correction Facility with — after extensive discussion and weeks of research — the blessing of Indiana's Department of Correction.

For Sackler, the film — and its accompanying documentary, "It's a Hard Truth Ain't It" — are a window into a world frequently fictionalized but seldom depicted faithfully.

"There's literally a prison genre. I mean, how did that happen?" said Sackler in an interview over coffee shortly before the film's premiere at Tribeca. "It became a joke. It became a thing that we think we know what it is, without coming from the actual place. That was one of the resounding things that people said again and again in prison: 'They never get it right. There's no true reflection of what my experience here is like.'"

Sackler is a 35-year-old filmmaker who was raised in Greenwich, Connecticut. Her grandfather was an owner of the pharmaceutical giant and Oxycontin-maker Purdue Pharma. Sackler's first time visiting — and shooting in — a prison was while making her 2010 breakthrough documentary "The Lottery," about charter schools in New York City. The experience of witnessing a young family's visit gave her, she says, "a more human view" of an often sensationalized institution.

"You should go," Sackler says of prisons. "Everyone should."

Both films, through lenses of fiction and documentary, are arguments for the dignity of its locked-away participants. To steal or distort the stories of the incarcerated for crime shows and action films, Sackler believes, is one further injustice in a dehumanizing system predicated on punishment rather than — as is the practice in some other countries — rehabilitation. Though less than 5 percent of the world's population, the U.S. accounts for almost 25 percent of the world's prisoners.

"Not having an ability to share your story, there's something very damaging about that, about having your story be locked in or manipulated," says Sackler. "You've already lost all of your control in life and your humanity. Your clothes are stripped away. Your identity is stripped away. You become a number."

It took a few dozen phone calls to find a prison system willing to allow Sackler — and a crew of up to 30 — to shoot on their grounds. It was, finally, Douglas S. Garrison, then chief communications officer at the Indiana Department of Correction (he recently retired), who said yes. Or at least he didn't immediately say no.

"When Madeleine called, it was certainly an unprecedented idea to shoot a dramatic film inside a working prison," says Garrison. "I was intrigued by it. We just didn't want some old prison movie to be made. We wanted it be something that was important, and I truly think Madeleine delivered on her vision."

Sackler first spent months doing research at Pendleton. When the production for "O.G." was postponed a year to accommodate Wright's schedule on "Westworld," she began a filmmaking workshop with inmates. She showed them documentaries like "Grizzly Man" and "Murderball," and encouraged them to use the documentary process to share with each other their own stories. The inmates took turns on both sides of the camera describing their paths to prison.

The result, which premiered Wednesday at Tribeca, plays like a kind of prequel to "O.G." Sackler shares directing credit on the documentary with the 13 participating inmates.

To cast "O.G.," Sackler did table readings with prisoners. While the film includes professional actors like William Fichtner and Boyd Holbrook, its background performers and minor characters are overwhelmingly prisoners. One of the film's primary characters — a new prisoner whose gang-directed task brings him into the orbit of Wright's soon-to-be-released veteran — is played by Theothus Carter. He's serving a 65-year sentence for armed burglary and attempted murder.

Shortly after shooting concluded, Carter's 16-year-old son was shot and killed. He's spent much of the last year and half in solitary housing, something he has claimed is punishment for the movie. Garrison disputes that: "He's in a segregated housing unit because of his own misbehavior and that has nothing to do with the filmmaking."

"Many if not most took great pride in what they were doing," said Garrison. "We didn't have any incidents of misbehavior during the production — there might have been a couple — but the guys really took to heart their role."

Shooting at a prison naturally had its unique difficulties. Pendleton's central tower needed to know each prisoner's whereabouts at all times. Locations could get shut down at a moment's notice. Sackler and crew were locked out one day.

Asked what the incarcerated men brought to the film, Sackler replies: "Truth."

Both films are for sale at Tribeca. At the premieres of each, several inmates have been video-teleconferenced in from Pendleton for post-screening conversations. Some had family in the audience.

Sackler's camera remains at Pendleton, left for the prisoners to use.

"Everything has reduced violence and crime to a single act. I just don't see when being reductive has ever helped us find solutions," says the filmmaker. "I've been feeling like we treat our farm animals better than we treat human beings and it doesn't really sit very well with me. I understand how it happened. But at some point I hope that we'll all be very, very embarrassed this happened for so long."