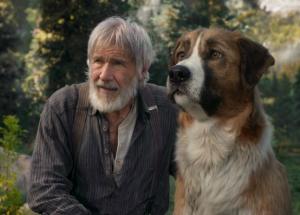 Does the dog movie have any new tricks? Do we want it to?

For the most part, we want our dog movies like our pooches: comforting, obedient and slightly slobbery. "The Call of the Wild," the latest adaptation of Jack London's 1903 novel, is all those things but adds a new twist. Its canine is computer generated.

Whether that's an improvement or not depends on how you prefer your animals, digital or more down-to-earth. Previous adaptations of "The Call of the Wild," going all the way back to 1923, were usually done with real dogs, including the 1935 version with Clark Gable and a 1972 film with Charlton Heston.

But movies, like sled dogs, run in packs. This "Call of the Wild," which co-stars Harrison Ford, follows a string of movies that have tried, and mostly failed, to herd the animal kingdom into the realm of CGI, including "The Lion King" and "Dolittle." And yet they've still been upstaged by the genuine article. If we're giving out best in show, the paws-down choice of late has been Brad Pitt's pit bull in "Once Upon a Time ... in Hollywood."

It's not that Buck, the St. Bernard-Collie mix of "The Call of the Wild," isn't a good boy. He's a towering, fluffy guy who will almost, but not quite, fool you into thinking he's real. He was created partially through a motion capture performance by Terry Notary, who was memorably ape-like in the dinner scene of Ruben Ostlund's "The Square." The more compelling, albeit unsettling version of "The Call of the Wild" may be seeing it with Notary's Buck, sans digital effects.

The movie, directed by Chris Sanders ("How to Train Your Dragon," "Lilo & Stitch") and penned by Michael Green, takes the basic shape of London's adventure while boosting the adrenaline whenever possible. There are added scenes like an underwater rescue and an avalanche.

But it similarly sketches the Pacific Northwest odyssey of Buck, whose sunny days in California end when he's kidnapped and shipped north to fetch a price from the teaming miners of the 1890s Klondike Gold Rush in the Yukon. Buck falls in first with a cheerful mailman named Perrault (Omar Sy), who teaches him to be a sled dog. There are worse owners, too, including a posh, abusive fortune-seeker (Dan Stevens). But Buck also repeatedly encounters a bearded woodsman named John Thornton (Ford) who's both our narrator and Buck's eventual master. So smart a dog is he that he even noses away the bottles of the heavy-drinking Thornton, like some animal dreamed up by AA and the ASPCA.

Buck's destiny remains easy to root for. And Ford, looking happier to be on screen than he has in some time, adds considerably to the movie's charm. The whole thing, with Steven Spielberg's regular cinematographer Janusz Kaminski handling photography, has a warm polish. But it's also thoroughly ironic to make a movie about the gravitational pull of the wilderness with so much help from computers. There is little here, amid the high-tech photorealistic animations, that would satisfy London's concept of "wild."

"The Call of the Wild" is the first film released under the newly renamed Twentieth Century Pictures, the studio formerly Twentieth Century Fox and since acquired by the Walt Disney Co. It's a name and logo that can look a little neutered, even if "The Call of the Wild" may seem like it had Disney DNA from the start. But Disney has its own formidable new sled dog movie, too, in "Togo" (starring a real dog), which recently debuted on its streaming service. All of which is to say that today's movie landscape is, as ever, a dog eat dog world.

"The Call of the Wild," a Twentieth Century Pictures release, is rated PG by the Motion Picture Association of America for some violence, peril, thematic elements and mild language. Running time: 100 minutes. Two stars out of four.