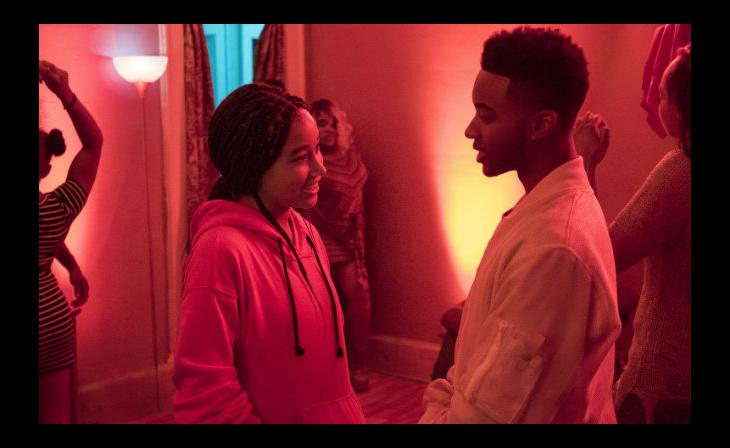 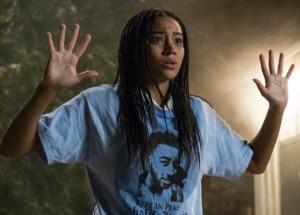 "The Hate U Give " begins with a scene at the family dinner table where a father is giving his young kids "the talk" — the one in which he explains to his 9-year-old daughter, Starr, and toddler son exactly what to do when they're pulled over by a police officer. Hands on the dashboard. No sudden movement. Answer the questions directly. Don't elaborate.

A teenage Starr (played by Amandla Stenberg, who gives an astonishing performance) is narrating this memory. She's as surprised as the audience is that this "talk" was given at such a young age. But it's one that will stay imprinted on her. For Starr and her family and friends, it's a matter of life or death. And it's a scenario that will come back in the most horrifying way imaginable.

"The Hate U Give," a popular young adult novel by Angie Thomas, is adapted with deft skill by Audrey Wells, a prolific and deeply humane screenwriter and filmmaker who died last week from cancer, and lovingly directed by George Tillman Jr. It's love that permeates every corner of this very prescient and effective drama that should be seen by moviegoers of all ages.

Starr Carter leads what she describes as a double life. Her home is in Garden Heights, a poor, predominantly black neighborhood that her father, Maverick (Russell Hornsby) loves and feels attached to. Her prep school, Williamson, is wealthy and predominantly white and something that her mother, Lisa (Regina Hall), deems necessary. And she navigates these two versions of herself with self-prescribed decorum for both.

"Williamson Starr doesn't give anyone a reason to call her ghetto," she says. "And I hate myself for doing it."

She keeps her white boyfriend Chris (K.J. Apa), and friends (Sabrina Carpenter and Megan Lawless) at a distance from her home life, which she manages pretty well until the night when she witnesses her childhood best friend, Khalil (Algee Smith), get shot by a white police officer at a traffic stop.

It's a scene made only more devastating by how sweet everything is right before it happens. Starr and Khalil run into each other at a party that gets broken up and he offers to drive her home. He's a little changed, sporting some fancy new clothes and shoes, as he's started working for a local drug lord, King (Anthony Mackie), to help support his family and pricey medical bills. The two high schoolers talk about music, and flirt and Khalil leans in to kiss Starr. On its own, this sequence is straight out of the best high school rom-coms, before it turns into a horror film.

Khalil's killing becomes a national story and Starr is torn about what to do. Testify? Go public? Put her name out there? Not only would she be exposing herself to her school pals, but back at home King and his cohorts have threatened her family, fearing that she would put their operation in jeopardy, too. This debate leads to some fascinating conversations — illuminating and disheartening — between various people, including her uncle Carlos (Common), who is also a police officer, and a fiery activist, April (Issa Rae). But the most moving talks are the ones with her family.

For as naturalistic and real as "The Hate U Give" is, it goes off the rails just a little bit at the climax to make its grand point about the effect of this kind of climate on innocents, but there is too much heart here to really nitpick at a little hyperbole.

If there is any justice in Hollywood, this is the type of film that should make Stenberg a movie star who has her pick of projects. She's the type of actress who can even make a role in a bad film sing. And in a very good one like "The Hate U Give"? She's just magic.

"The Hate U Give," a 20th Century Fox release, is rated PG-13 by the Motion Picture Association of America for "mature thematic elements, some violent content, drug material and language." Running time: 132 minutes. Three and a half stars out of four.