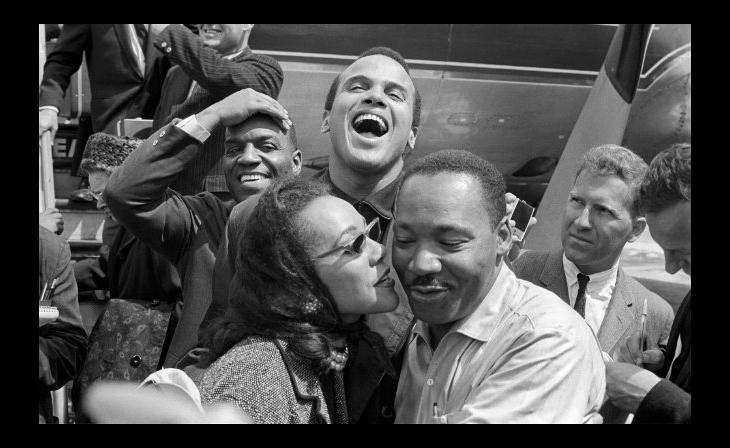 In this 1963 image released by HBO, Dr. Martin Luther King, Jr., right, receives a kiss from his wife Coretta Scott King as they appear in Alabama with Nipsey Russell, back row left, and Harry Belafonte. The image appears in the documentary "King in the Wilderness." (Ivan Massar/Take Stock/The Image Works/HBO via AP) 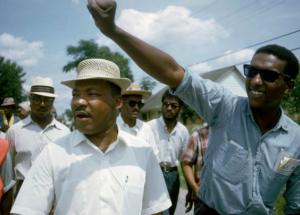 When a figure is as fundamental to our history and national identity as Martin Luther King Jr., is there anything left to learn about him?

Actually, it may be precisely because King is such a towering figure in our collective memory that we tend to focus on a few big moments — Montgomery, Birmingham, Selma and of course "I Have a Dream" — and let the rest fade into history, leaving us with more myth than man as time goes on. That's the argument behind the new HBO documentary "King in the Wilderness," a fascinating and poignant look at the less-examined final years of the man's life, timed for the 50th anniversary of his death.

It's a compelling argument: Google a list of King's iconic moments, and it'll likely skip the years between 1965 and his 1968 assassination. Young people today are familiar with that iconic 1963 speech at the March on Washington, but much less so King's blistering 1967 speech at Riverside Church in New York, excoriating U.S. involvement in Vietnam.

It was an agonizing moment for King, who felt he could no longer stay silent about the war but risked fury from across the political spectrum — including from some associates in the civil rights movement — by getting involved in the fray. In "King in the Wilderness," directed by Peter Kunhardt, we learn King wrote much of the speech in friend Harry Belafonte's apartment, filling yellow legal pads and tossing crumpled pages into the trash — only to be secretly retrieved by Belafonte. The speech, feels Rep. John Lewis, another King friend interviewed here, was the best he ever gave: "He literally poured out of his heart the depth and essence of his soul." Yet King was vilified by many afterward, and felt both betrayed and abandoned.

Like that nugget on Belafonte "swan-diving" into the garbage pail, this film is filled with fascinating bits of information, culled from hundreds of hours of archival footage and countless photos. It veers from the very public to the deeply personal, including heart-wrenching scenes of King's father collapsing with grief over his son's coffin. A friend, Xernona Clayton, describes using the powder compact from her purse to fix the mortician's messy work on King's jaw, to the relief of his widow, Coretta. She also describes how, leaving for the airport with King for that fateful Memphis trip, she watched as his children — who were accustomed to their father traveling — strangely tried to block him this time, saying, "Daddy, please don't leave!" She says King told her: "When I come back, I've got to change my habits."

The film takes off, chronologically, just after the events so beautifully captured by Ava DuVernay in her Oscar-nominated "Selma." The following year, 1966, we find King increasingly on the defensive about his essential ethos, non-violence. In a telling scene, King marches in the South alongside fellow activist Stokely Carmichael, while a reporter walks between them with a microphone, eliciting competing visions: Carmichael is talking "black power," and King is talking non-violence.

We witness King's eye-opening experiences in Chicago in 1966, marching against segregation in housing and encountering outright hatred in the streets, with people brandishing "White Power" and swastika signs, and yelling racial epithets. One disturbing photo shows a young white child yelling angrily at the demonstrators, wrapped in a swastika banner held by the adult with him. "Chicago was a huge awakening for him," Belafonte notes, describing King's shock at encountering racial hatred similar to anything he'd seen in the South.

In these later years, comments friend Andrew Young, King was increasingly despondent that he was, in his own view, not doing enough — even that "somehow, he wasn't good enough to be the leader." At one point, we learn, he was offered a job as interim pastor at Riverside Church, but could not see taking a break from his life's essential work. It was, Young says, almost as if King felt that death would be the only escape from his work.

At the very end of King's life, though, there was lightheartedness. At home in Atlanta just before leaving for Memphis, Clayton says, there was a joyful family afternoon, with food and laughter and music. (King informed Clayton, "I'm a good singer, did you know that?") And Young, who was with King at the Lorraine Motel in Memphis, says that just before he was shot, the two of them happily tossed a pillow around.

"It was the happiest I had seen him in a long time," he says.

"King in the Wilderness," an HBO release, is unrated. Running time: 111 minutes. Three and a half stars out of four.