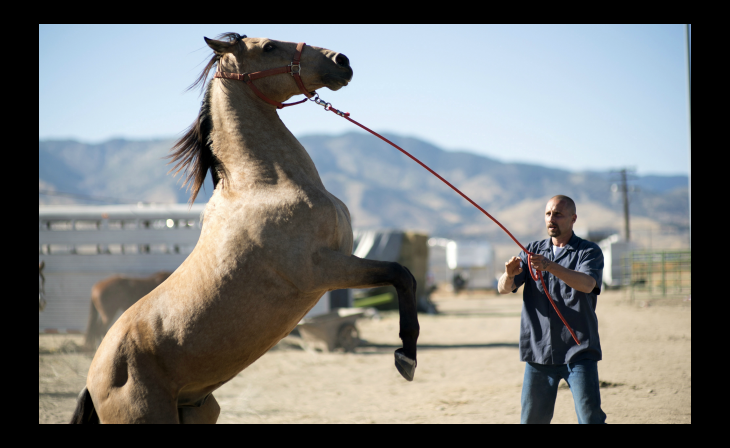 This image released by Focus Features shows Matthias Schoenaerts in a scene from "The Mustang." (Tara Violet Niami/Focus Features via AP) 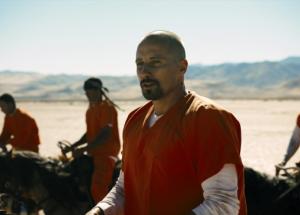 We don't find out our protagonist's name for quite some time in "The Mustang," the feature debut of French writer-director Laure de Clermont-Tonnerre.

All we know at first is what we see and what Belgian actor Matthias Schoenaerts projects. A psychologist played by Connie Britton, in a brief but impactful role, tries to get a sense of his mental state having been in and out of solitary confinement in a rural Nevada penitentiary a number of times, but he's not interested in playing along, or even trying.

"I'm not good with people," growls Schoenaerts as he hits her panic button to end the session.

Schoenaerts is a commanding presence, and usually a quite empathetic one in films like "Rust and Bone" and "A Bigger Splash," but here with a shaved head and a rage simmering beneath his nearly dead eyes, he's downright terrifying. His identity, you realize, is that of a prisoner. He doesn't think about his past, his future or his needs. He merely exists. He even rebuffs the young pregnant woman (Gideon Adlon) who comes to visit. (It's his daughter, you discover, but even that is left ambiguous for a moment).

It's not until he's assigned to manure duty as part of the correctional center's wild horse training program that a light even starts to come back on, partly because the head of the program, Myles (Bruce Dern) treats the inmates like human employees, not criminals. He even asks our protagonist his name: Roman Coleman. The significance of naming will come back in this brief, gorgeous film about untamed and forgotten outcasts. It's probably worth mentioning here that the themes aren't exactly subtle, but that doesn't make them any less effective.

This is a real program in which inmates, many with no equine experience, tame wild horses for eventual adoption and sale to the public.

Roman, of course, takes to the craziest horse. Perhaps it's the first time he's actually felt smaller or less powerful than a living creature. And with the encouragement of a fellow inmate, Henry (the always compelling Jason Mitchell), he starts the long process of "gentling" the horse. He'll eventually even give it a name — Marquis, which he sees in a contraband equestrian magazine he traded for in the prison, but which he pronounces "Marcus."

There's a sin in his past that's never even alluded to, of course. It's why he's in there after all. Does no one know, you wonder? Or perhaps it's too horrific for words. It's revealed eventually, late in the film and not unlike that pivotal revelation in "Paris, Texas."

Even with its unusually restrained running time, "The Mustang" is a powerful and emotional journey framed by gorgeous sun-soaked shots of the stark Nevada landscape. I just wish there was a little more character development for the supporting players, like Myles and Henry, and the prison's rotten apple Dan (Josh Stewart), who feels more like a lazy screenwriting construct than an actual part of the world we've gotten to know.

But Clermont-Tonnerre has established herself as a filmmaker to watch with "The Mustang," and has also made the most compelling case yet that Schoenaerts can not only handle an American accent, but excel with it too.

"The Mustang," a Focus Features release, is rated R by the Motion Picture Association of America for "language, some violence and drug content." Running time: 96 minutes. Three stars out of four.