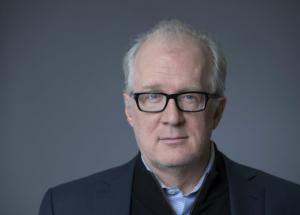 In this Jan. 16, 2018 photo, Tracy Letts poses for a portrait in New York. Letts, who has supporting roles in “Lady Bird” and “The Post,” is also a Pulitzer Prize- and Tony Award-winning playwright. (Photo by Amy Sussman/Invision/AP)

If you want to get Tracy Letts in your movie — and that might be a good idea since he has two up for best picture at the Oscars — you'd better proofread the script before you send it.

Letts, who has supporting roles in "Lady Bird" and "The Post," is also a Pulitzer Prize- and Tony Award-winning playwright and says he has abandoned new scripts after 20 pages if they torture the English language.

"If I get a script that has a lot of bad grammar, a lot of typos, then I think, 'Well, they probably didn't work real hard on making the script good,'" he said. "So that's big for me."

His instincts seem to have worked out marvelously over the past year, with two celebrated films, his play, "The Minutes," about to land on Broadway, another play — "Mary Page Marlowe" — coming off-Broadway this summer, and a role in HBO's "Divorce," now in its second season.

"Look, I'm just real lucky. I had some great stuff land on my doorstep," he said during a recent interview. "I've had so many great opportunities and I'm having the time of my life."

His busy schedule is about to magnified — and permanently: Letts and his wife, Carrie Coon, who is having her own breakout moment thanks to roles on "The Leftovers" and "Fargo," are welcoming their first child this spring.

"People keep telling us our lives are going to change. I don't believe 'em," said Letts, displaying his dry sense of humor. "No way. No chance. How could it possibly change my life?"

As a sign that Letts and Coon have reached the big time, the couple is suddenly being approached with offers of swag. Letts, 52, is both appalled and intrigued at the idea.

"People now give me free stuff. Like my wife is pregnant and so suddenly it's like, 'Hey, you guys need some free stuff?' Baby carriers and stuff? Here's a free dad bag,'" he said, laughing. "We get free stuff! It's so unfair."

Letts burst to worldwide fame when his "August: Osage County" won the Pulitzer and five Tonys, including the best-play trophy in 2008.

He returned to Broadway in a 2012 revival of "Who's Afraid of Virginia Woolf?" and had two good things happen — he met his wife doing the show and one of the creators of "Homeland" saw him in the play, kick-starting his latest screen career with a story arc as a CIA director.

Soon he was in Todd Solondz's "Wiener-Dog," which also starred Greta Gerwig, the author of "Lady Bird," a coming-of-age tale about a teenage girl in her last year of high school in 2002.

Gerwig and Letts didn't share any screen time and only met for the first time at the premiere of "Wiener-Dog" at the Sundance Film Festival. They talked for 20 minutes and something clicked. "She realized on talking to me that I was an old softy and decided to put me in her movie," he said.

Laurie Metcalf, a fellow member of Steppenwolf who only worked with Letts for the first time as his onscreen wife in "Lady Bird," said working with him was one of the draws.

"I knew he would be a real rock in all the scenes I have with him," she said. "I've told him I love his style of acting. It's very minimalistic. Very direct, very quiet. No kerfuffle. I like that."

"The Post," in which Letts plays a trusted adviser to Washington Post publisher Kay Graham, came together fast. The timely story about publishing the Pentagon Papers forced director Steven Spielberg and actors Tom Hanks and Meryl Streep to accelerate their normal film schedules.

"We did absolutely feel an urgency. There was a civic-mindedness about all of our approaches to the film," he said. "We all had a reason to be there."

The pitched politics of today also infuses Letts' "The Minutes," a play about members of a small-town city council meeting working out their differences over 90 minutes.

"The play isn't about Donald Trump and it's not about Hillary Clinton. It's not about Democrats or Republicans, though it does present a couple of different political philosophies in the mouths of characters," he said.

To get ready to write, Letts endured watching hundreds of hours of civic meetings on YouTube. "If you're struggling with insomnia, I've got a surefire solution to that problem," he joked.

To extend Letts' dominance of all possible media, he also features on "Divorce," playing the wealthy husband of Molly Shannon. He shot eight episodes, in style. "Because I play a guy with money, I get to be on nice sets and wear nice clothes. Oh, man, it's a dream job. Who wouldn't want that gig?"

His success does leave him in a bit of a pickle when it comes to the Oscars: Where will he sit on the big night? At the "Lady Bird" table or the one for "The Post"?

Somehow Letts will find the low-key, diplomatic way. At the Golden Globes, he avoided both films and instead sat with his wife at the "Fargo" table.

"That's the way I handled that conundrum," he said.