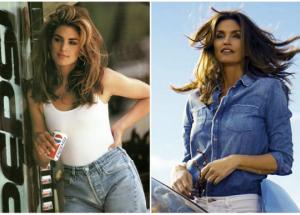 This combination of photos released by Pepsi shows actress-model Cindy Crawford in a scene from her 1992 iconic Super Bowl Pepsi commercial, left, and a scene from her 2018 commercial which will premiere during Super Bowl LII on Feb. 4. (Pepsi via AP)
By Mae Anderson, Technology Writer
NEW YORK (AP) --

NBC has less than 10 ad spots left to sell a little less than a month ahead of Super Bowl 52, the network says.

Ads are going for slightly more than $5 million per 30-second spot.

The big game, which is as much an advertising showcase as it is a football showdown airs Feb. 4.

NBC is airing the Winter Olympics beginning less than a week after the Super Bowl and about one-third of total advertising revenue from both events will come from advertisers who have bought spots during both events.

Anheuser-Busch, Coca-Cola and Kia are among the Super Bowl advertisers. And PepsiCo said Thursday its ad will feature Cindy Crawford recreating her iconic 1992 Super Bowl spot in which she buys a can of soda at a gas station.