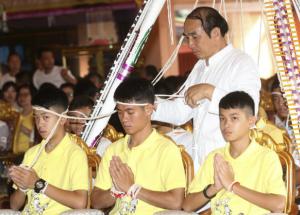 Soccer coach Ekkapol Janthawong, center, and members of the rescued soccer team attend a Buddhist ceremony that is believed to extend the lives of its attendees as well as ridding them of dangers and misfortunes in Mae Sai district, Chiang Rai province, northern Thailand, Thursday, July 19, 2018. The 12 boys and their soccer coach rescued from a cave in northern Thailand left the hospital where they had been recuperating and appeared at a news conference Wednesday, saying the ordeal made them stronger and taught them not to live carelessly. (AP Photo/Sakchai Lalit)
By Kaweewit Kaewjinda
BANGKOK (AP) --

Thailand's military government wants to control how movies portray the ordeal of the young soccer players and their heroic rescue from a flooded cave that drew worldwide interest and the attention of foreign filmmakers.

Culture Minister Vira Rojpochanarat said he will propose at next week's Cabinet meeting that a special committee be established to oversee the production of films, documentaries and videos related to the experiences of the 12 boys and their coach who were trapped in a cave for almost three weeks before being rescued.

With the boys returned home, attention has turned to how the media is handling the post-rescue story. There has been criticism of several news outlets, mostly foreign, who are considered to have ignored official advice to leave the boys alone for at least a month to try to avoid psychological stress that recounting their ordeal might trigger.

Deputy Prime Minister Wissanu Krea-ngam said Friday he had instructed officials from the Ministry of Social Development and Human Security to make sure the young soccer players and those associated with them are not bothered while they are going through a period of mental rehabilitation.

He said the foreign media "may not know the consequences of our child protections laws. Even if unintentional, but if guilty, we can conduct legal proceedings against foreigners." Wissanu, who is considered the top legal expert for Thailand's ruling junta, said the boys are protected by child protection laws and information protection laws.

The rescue, carried out successfully against high odds, was a rare bit of feel-good news from Thailand, which has been mired in political conflict and heavy-handed military rule for more than a decade. Even as the world watched the cave saga, a boat sinking off a southern resort island claimed almost 50 Chinese tourists, an event that normally would have registered as a high-profile debacle.

The cave rescue also allowed the government of Prime Minister Prayuth Chan-ocha, who has been criticized for political maneuvering to stay in power after elections planned for next year, to share in some glory.

The government's Thailand Film Office already regulates the production of films shot in Thailand by foreign companies, including vetting scripts and issuing filming permits, but Vira said the committee would oversee content, licensing and the protection of privacy of the rescued team and their families.

Vira, speaking after a film board meeting Thursday chaired by Deputy Prime Minister Wissanu, said five foreign film production companies have shown interest in making a movie or documentary about the cave rescue and some had already been on location to collect information.

Thai film producers have also shown interest but have not yet contacted the government, Vira said.

The boys and coach of the Wild Boars soccer team were released from the hospital on Wednesday and at a news conference described how they got trapped in the cave, and after 10 days cut off from the outside world, were astonished to see two British divers rising from muddy waters and assuring them work was underway to rescue them.

"This (story) has all the right elements," Vira said. "If you talk about drama associated with filmmaking, it has everything. It has loss as well as jubilation. The content and story it has for filmmaking is very complete. Even if you don't create additional drama, these events had every flavor."

Wissanu said that it is the boys' right to sign contracts for their own benefit, but added that the government committee would provide advice "like a manager," but without seeking any profit for itself.

He said the government was "very afraid" that some of those close to the ordeal could be coerced to sign contracts "because once a contract is signed, that person can't do anything else, which is why someone with legal knowledge needs to step in and help."

Several murals and sculptures have already been commissioned to mark the epic cave adventure. Many focus on Saman Gunan, a former Thai navy SEAL who volunteered to help with the rescue effort and died while diving on a mission to supply the cave with oxygen tanks essential to helping the boys escape. Saman is being treated as a national hero.