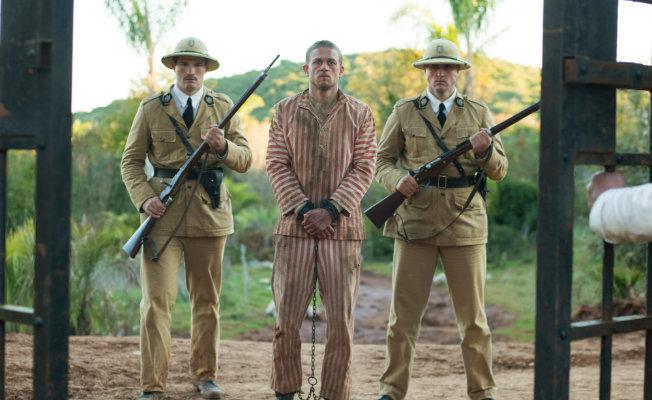 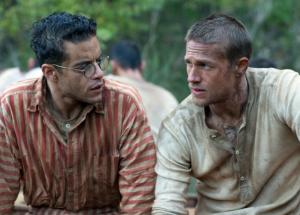 Danish director Michael Noer's "Papillon " remake, adapted from both Henri Charriere's autobiography and the 1973 Steve McQueen and Dustin Hoffman film, is a sumptuous-looking but slow-moving prison drama that at times will have you dreaming about an escape of your own.

Charlie Hunnam stars as Papillon, nicknamed for the butterfly tattoo on his chest. He's an expert safecracker in Paris who is framed for murder in 1931 by his underworld boss and sent off to a prison camp in French Guiana where he makes an alliance with a fellow inmate while plotting his exit. The inmate, Louis Dega (Rami Malek), is a wealthy artist and forger who has a roll of cash hidden in a delicate place and who is too small and weak to keep it safe on his own. So "Papi" becomes his protector, with the understanding that Dega will underwrite his escape.

And goodness does Dega need protection. Malek plays him as an elitist intellectual who is convinced that he'll be out in no time. His arrogance and inability to do anything but throw money at a situation make him an easy target. During one of his first nights in the horrifyingly crowded ship transporting them to the camp, a prisoner cuts open the stomach of the man sleeping next to him, hoping to find hidden cash. Having Papi there ready to throw a punch — or 10 — at any time (even naked in a shower) comes in handy for Dega, certainly. At almost every turn, this strategic codependence seems to actually make more problems for Papi, but he's a man of his word and over the years develops a soft spot for Dega, who gets slightly less annoying.

It's an incredible true story filmed with breathtaking grace by German cinematographer Hagen Bogdanski ("The Lives of Others") that while violent and punishing mercifully spares the audience some of the gruesomeness, like when Dega has a bout of diarrhea and loses the money. (There is quite enough blood and gore otherwise.)

Hunnam give a fine performance as the unbreakable Papi, an interesting companion character to Hunnam's Percy Fawcett from "The Lost City of Z." But unlike the other film, the script for "Papillon" has chosen to make much of his journey, which includes long stretches in silent solitary confinement, an internal one. The story plays up the cartoonish brutality of the guards and administrators who speak only in cliches and are manically focused on breaking the prisoners, but gives us little insight into what is driving Papi to hold on to sanity and hope.

That's not to say that the film is without some thrilling action (and a mime hallucination). But when the punishment for attempting to escape is two years in solitary confinement, and then five years on the next attempt, you can understand how these escape attempts are few and far between. For as much time as we spend with Papillon in total isolation in silence, you come out of each stint in solitary no wiser about his motivations. The most we get to know about him as a character comes in the first few minutes, when he's drunkenly stumbling through Paris, open champagne bottle and dancer girlfriend (Eve Hewson) in hand, rejecting her plea to leave city life and move to the country and plotting out how he's going to be wealthy in six months.

Of course Papi's path was ultimately quite different than what he planned, and if his story is at all intriguing to you, you might be better off sticking with the original.

"Papillon," a Bleecker Street release, is rated R by the Motion Picture Association of America for "violence including bloody images, language, nudity, and some sexual material." Running time: 133 minutes. Two and a half stars out of four.