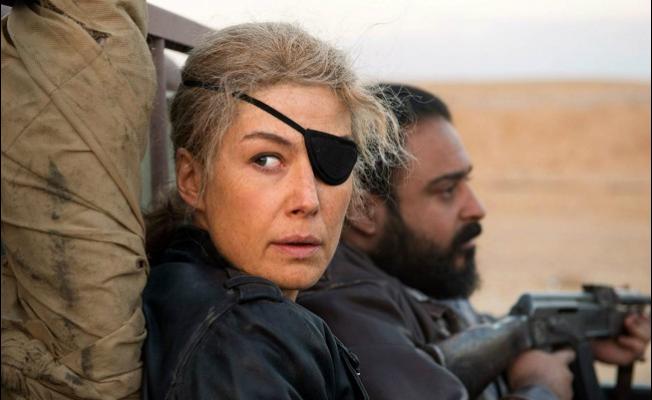 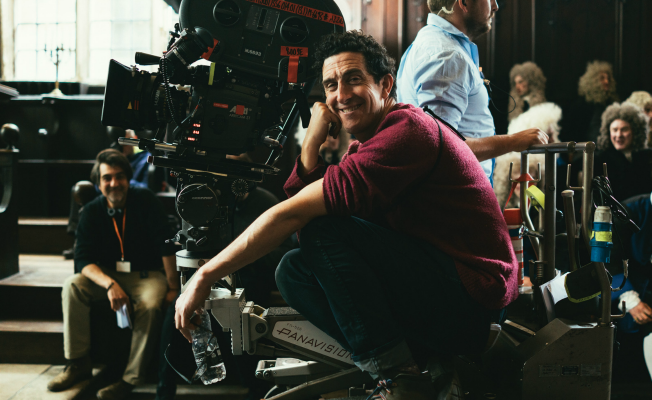 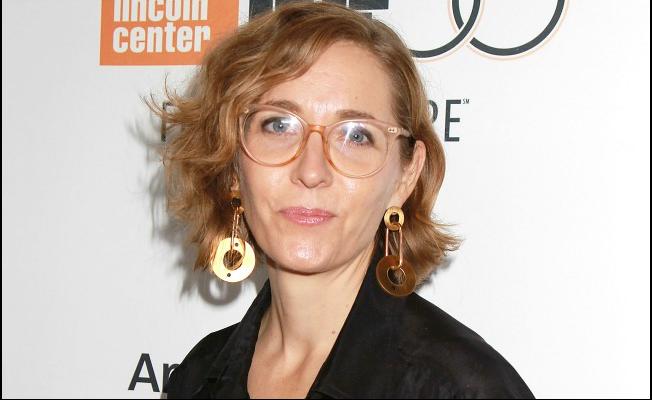 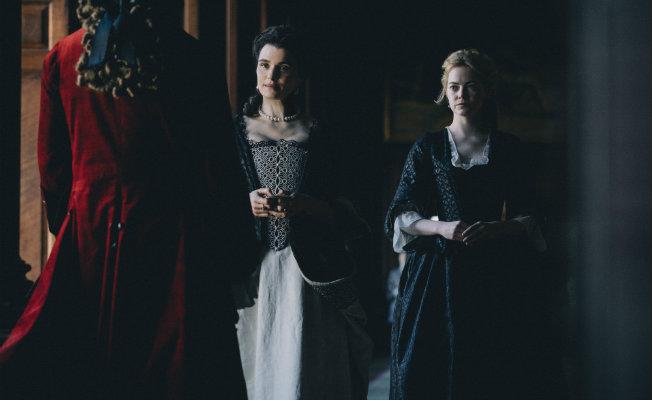 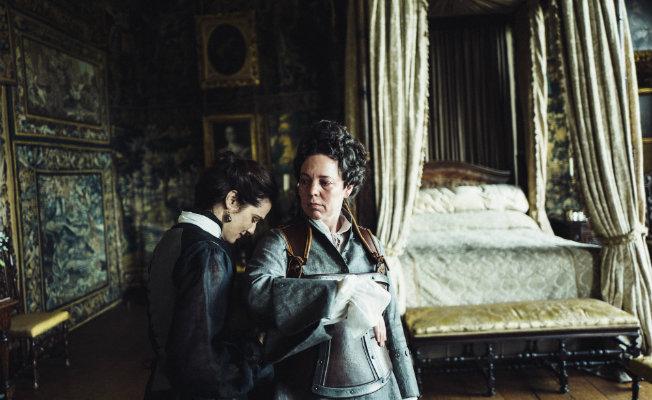 his image released by Fox Searchlight Films shows Rachel Weisz and Olivia Coleman, right, in a scene from the film "The Favourite." (Yorgos Lanthimos/Fox Searchlight Films via AP)
Prev Next
DP Robert Richardson Wages "A Private War" To Gain Attention For An Important Story 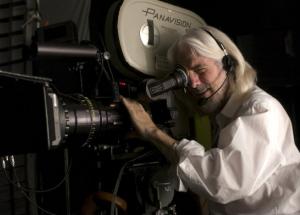 A nine-time Best Cinematography Academy Award nominee--who won in 1992 for JFK, in 2005 for The Aviator and in 2012 for Hugo--Robert Richardson, ASC wasn’t interested in being covered in SHOOT’s The Road To Oscar series for individual attention. In fact, he expressly didn’t want to talk about any contributions he made to A Private War (Aviron Pictures). Rather he preferred the spotlight be on the movie itself, its director/producer Matthew Heineman, and its protagonist, the late war correspondent Marie Colvin portrayed by Rosamund Pike.

Richardson would very much like A Private War to find a larger audience because of his belief in the importance of the subject matter--in this case Colvin, a journalist who sacrificed her life to show the innocent victims of war, her last report coming from Syria where she chronicled the ongoing siege’s heart-wrenching physical, psychological and emotional toll on everyday people and families. During a time when journalism itself is under attack, Richardson noted that Colvin’s story shows that there are reporters who on a daily basis are putting themselves in peril to inform the world at large of injustice, atrocities and human suffering.

Richardson said he was drawn to the story and to Heineman, an accomplished documentarian who was making his narrative feature directorial debut with A Private War. Earlier this week, A Private War earned Heineman a DGA Award nomination for Outstanding Directorial Achievement of a First-Time Feature Film Director for 2018.

Heineman, though, is no stranger to DGA recognition. He won DGA Awards for Outstanding Directorial Achievement in Documentary for Cartel Land (nominated for a Best Feature Documentary Oscar) in 2016 and for City of Ghosts in 2018. Akin in some respects to Colvin, Heineman too has placed himself in harm’s way as a filmmaker. City of Ghosts introduced us to a band of Syrian citizen journalist rebels who risk their lives to document the atrocities committed by ISIS in their homeland.

Richardson said it was “remarkable” to see Heineman’s level of commitment to telling Colvin’s story, capturing her personal sacrifice and sense of purpose, giving voice to the otherwise voiceless victims of war. As for Heineman’s first foray into a narrative feature, Richardson said, “I saw no transition issue from documentary to this film with Matt. He has an amazing discipline and dedication--and I dedicated myself to his vision. Everyone banded together, got behind and cared about this story about a remarkable journalist with an incredible intellect who had to live emotionally on a different plane.”

Colvin sacrificed loving relationships, and over time her personal life started to unravel as the trauma she witnessed over the years impacted her deeply. Yet her mission to show the true cost of war led her to embark--along with renowned war photographer Paul Conroy (portrayed by Jamie Dornan)--on the most dangerous assignment of her life, in the Syrian city of Homs. Colvin was killed and Conroy was seriously injured during Syrian President Bashar al-Assad’s siege on Homs.

Richardson also marveled at Pike’s performance as Colvin, which recently earned her a Golden Globe Award nomination. Richardson added that he very much needed to be a part of a story which showed a fearless woman in battle, a journalist on the frontlines providing a perspective on the cost of war and bringing acts of genocide to light.

“That’s why this film is so important and needs to reach as many people as possible,” affirmed Richardson who primarily deployed ARRI Alexa Minis on A Private War, describing the cameras as “versatile and malleable” for the demanding shooting situations encountered.

SHOOT connected with Richardson to discuss A Private War shortly after the American Society of Cinematographers had chosen him to receive the ASC Lifetime Achievement Award. The presentation will be made at the annual ASC Awards gala on Feb. 9 in Hollywood.

Richardson began shooting documentaries in the 1980s. His photography on Crossfire for an English TV station caught the eye of Oliver Stone, who enlisted Richardson for Salvador. That led to Platoon, and the beginning of a prolific credit list that includes Wall Street, The Doors, A Few Good Men, Natural Born Killers, Casino, Nixon, The Horse Whisperer, both Kill Bill movies, The Good Shepherd, Eat Pray Love, and Live by Night. Born in Massachusetts, Richardson fell in love with movies and studied at the Rhode Island School of Design, before advancing to the American Film Institute in the late 1970s. He apprenticed with such legendary cinematographers as Sven Nykvist, ASC, FSF and Nestor Almendros, ASC.

Robbie Ryan, BSC
For his work on The Favourite (Fox Searchlight), Robbie Ryan, BSC has already received accolades including winning the British Independent Film Award for Best Cinematography as well as the Audience Award at Camerimage. He’s also just been nominated this week for an ASC Award and a BAFTA Film Award on the strength of the film which takes us to the early 18th century. England is at war with the French. Nevertheless, duck racing, pineapple eating and other offbeat indulgences are thriving with people of wealth. A frail Queen Anne (Olivia Colman) occupies the throne and her close friend Lady Sarah Churchill (Rachel Weisz) governs the country in her stead while tending to Anne’s ill health and mercurial temper. When a new servant Abigail Masham (Emma Stone) arrives, her charm endears her to Sarah. Sarah takes Abigail under her wing and Abigail sees a chance at a return to her aristocratic roots. As the politics of war become quite time consuming for Sarah, Abigail steps into the breach to fill in as the Queen’s companion. Their budding friendship gives Abagail a chance to fulfill her ambitions and she will not let anyone or anything stand in her way.

The Favourite marks Ryan’s first collaboration with director Yorgos Lanthimos. Right out of the gate, the two were simpatico--particularly about going with 35mm film. Ryan deployed the Panavision Millennium XL2, the Arricam Studio and Arricam LT cameras. Ryan said that he and Lathimos felt film is more conducive to effectively using natural light. “I learned a heck of a lot shooting The Favourite for Yorgos,” related Ryan. “If you’ve got the right location, you do not need lights. It’s better you don’t have them in some respects. We had some scenes with nothing but candlelight. The majority of night scenes had some kind of flame as natural illumination.”

Ryan also thanked Stephen Murphy whom he described “as a fantastic DP” who came in for a week or so and worked on a number of night shoots. Murphy helped out when Ryan was called away due to the death of his father during the shoot.

With The Favourite, Lanthimos built upon his experimentation on a prior film, Sacred Deer, seeking “a vibrancy to how the camera moved,” explained Ryan. “We had wide lenses moving all the time. There was a sense of the entirety of a location via wide lenses” which at times “made the sense of space claustrophobic, with the characters feeling stuck in these huge rooms, like Hotel California where you can never leave. It kind of helped the whole story.”

The film wasn’t shot in a conventional manner, with Lanthimos and Ryan constantly seeking out different angles and perspectives which went a long way to making the film feel different, fresh and at times unsettling. You never quite know what’s coming next.

Fiona Crombie
For Lanthimos and Ryan on The Favourite, production designer Fiona Crombie’s efforts supported the movement of the camera. She made sure there was enough room to roam and push the perspective as needed. Negative space--historically accurate sparseness--was as important as the material objects in a room in order to give the camera optimum mobility.

Crombie noted, “Yorgos wanted me to provide him with corridors. Not just physical corridors but corridors within rooms so the camera had freedom of movement.”

At the same time, the wide angle lenses and 360-degree whip pans by Ryan showcased Crombie’s work from floor to ceiling to the corners of each room. The environments she created were on full display in relation to the characters.

It’s a display that has already been favorably received as The Favourite won the British Independent Film Award for Best Production Design and was nominated for the same honor by the Critics’ Choice Awards, the London Critics Circle Film Awards and the Los Angeles Film Critics Association Awards. Earlier this week, Crombie garnered both a BAFTA Film Award nomination and an Art Directors Guild Excellence In Production Design Award nom in the Period Film category for The Favourite.

As she gave Lanthimos room for the camera to roam, he gave her the room to roam out of the prescribed era if it advanced the storytelling. “We wound up with a mix. Some elements stayed within the time period and others stepped out of it,” said Crombie who cited as an example the birthday cake for one of Queen Anne’s rabbits. “I don’t know if there was such a thing as a birthday cake in 1705, but it was an element of fun, a little point of departure that told us about Queen Anne. Just by virtue of her 17 rabbits, you’re dropped into a place that is its own kind of world.”

Crombie observed, “Yorgos is playful with language and timelines. I recognized an irreverent tone with him that is quite freeing.”

Among the challenges posed to her by The Favourite was one common to designers--budget. “This was not a big-budget film but it had to be absolutely exquisite,” said Crombie. “The Queen had to be at the pinnacle.”

Helping Crombie reach that pinnacle was her frequent collaborator, set decorator Alice Felton. “The Favourite was our third film together. We have now done a total of four. We are intertwined. Set decoration is such a crucial part of my work. I love working closely with her. There is so much fine detail in this film. Every item has a particular silhouette. We create our own little language which plays throughout the film, adds to the quality, even if it’s only a subliminal understanding on the part of the audience.”

As for her biggest takeaway from her experience on The Favourite, Crombie cited “being trusted and given so much freedom by Yorgos. This is true of everyone he works with. He hired us and trusted us to do our jobs. He gave us his comments but you always came away knowing that you could do what was needed. He gives everyone confidence that they can bring their best to the film.”

This is the tenth of a multi-part series with future installments of The Road To Oscar slated to run in the weekly SHOOT>e.dition, The SHOOT Dailies and on SHOOTonline.com, with select installments also in print issues. The series will appear weekly through the Academy Awards gala ceremony. Nominations for the 91st Academy Awards will be announced on Tuesday, January 22, 2019. The 91st Oscars will be held on Sunday, February 24, 2019, at the Dolby Theatre at Hollywood & Highland Center in Hollywood, Calif.,and will be televised live on the ABC Television Network.  The Oscars also will be televised live in more than 225 countries and territories worldwide.