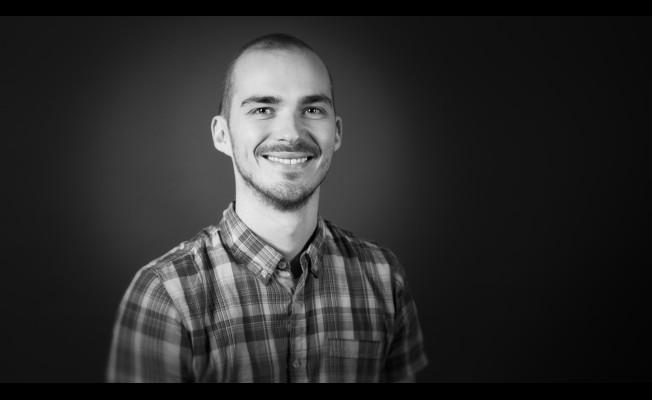 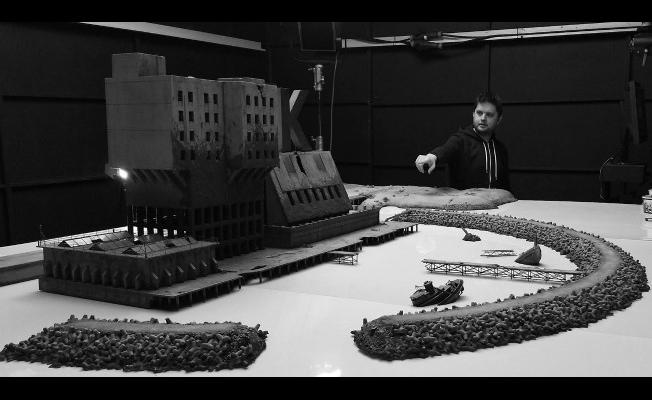 VFX supervisor Tim Ledbury on the set of "Isle of Dogs" 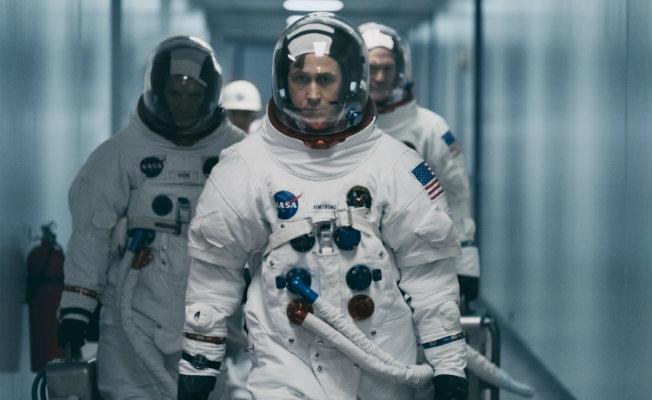 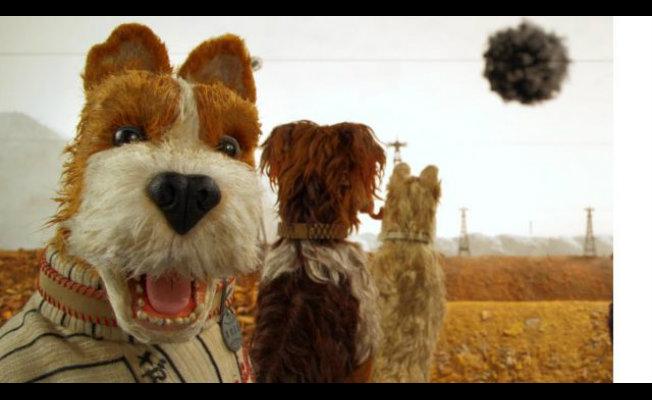 A scene from "Isle of Dogs" (photo courtesy of Fox Searchlight) 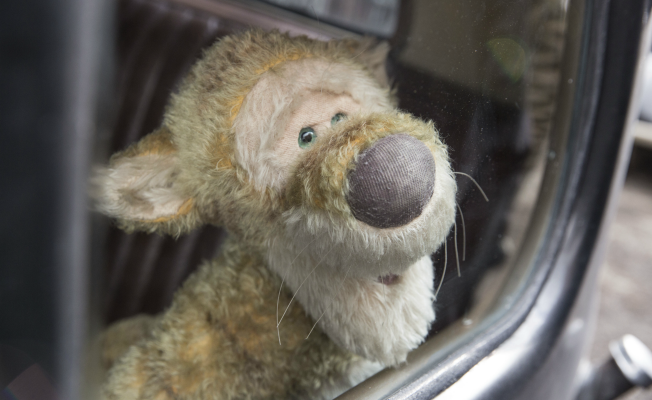 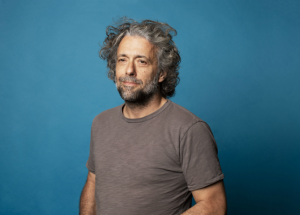 Based on the book by James R. Hansen, First Man chronicles the multi-faceted backstory of the first manned mission to the moon, focusing on Neil Armstrong (portrayed by Ryan Gosling) and the decade leading to the historic Apollo 11 flight. A visceral and intimate account told from Armstrong’s perspective, the film explores the triumphs and the cost--on Armstrong, his family, his colleagues and the nation itself—of one of the most dangerous missions in history.

The conventional approach would, for example to film actor Gosling and his colleagues on a set against a green screen and then digitally add their surroundings. But Chazelle wanted an extra level of realism that this typical effects route couldn’t fully provide.

So instead Lambert and his VFX team constructed a 35-foot-tall, 65-foot wide LED screen on which could be projected some 90 minutes of digital imagery created to tell the story. A replica of the given spacecraft was placed on a gimbal to move in sync with the imagery on the screen. This enabled the astronauts and their surroundings to be captured by the camera in real time. Actors could react to their surroundings rather than having to imagine their environment in a green screen setup.

Lambert and cinematographer Linus Sandgren, FSF teamed on various tests early on. Lambert would produce CG content and Sandgren would lens it in 16mm and 35mm film. “We’d look at the dailies and they already had a film look,” related Lambert. “You didn’t have to give it a film patina or film look after the fact.” This dovetailed perfectly with the 1960s’ era of the story.

Lambert noted that each nominee on his team made integral contributions to First Man. Myles, for example, oversaw the creation of the some 90 minutes of digital imagery for the enormous LED screen. Hunter handled all the miniatures which were deployed in the mid-shot work. And Schwaim was a prime purveyor of the extensive practical effects that brought the story to life.

For Lambert, the Oscar and VES nominations mean a great deal. “We went through a vetting process by the best industry professionals. It’s a great honor to have work recognized by your peers. We tried to do things a bit differently in First Man and they seem to have recognized this which is gratifying for all of us.”

That recognition for First Man also extends to another VES nod--for Outstanding Compositing in a Photoreal Feature.

Christopher Robin
Chris Lawrence of Framestore served as VFX supervisor on the Marc Forster-directed Christopher Robin (Walt Disney Co.) in which the title character (played by Ewan McGregor)--now a family man in London--receives a surprise visit from his childhood pal, Winnie-the-Pooh. Robin helps Pooh on a journey to find his friends--Tigger, Eeyore, Owl, Piglet, Rabbit, Kanga and Roo. Once they’re reunited, Pooh and the gang help Robin to rediscover the joy of life.

Lawrence’s VES-nominated colleagues on Christopher Robin are Steve Gaub, Michael Eames, Glenn Melenhorst and Chris Corbould. Lawrence reflected on each artisan’s contributions to the film. Eames, global director of animation at Framestore, was the animation supervisor on Christopher Robin. Lawrence said of Eames, “He brought an incredible attention to detail and the valuable knowledge of a practitioner. Often he would simply sketch exactly what he wanted. I thought with Winnie the Pooh he achieved one of the most subtle, nuanced animated screen performances ever seen. ‘No mean feat’ considering he had to achieve consistency from teams working in London, Montreal and Melbourne.”

Melenhorst, VFX supervisor at Method in Melbourne, oversaw a team that, said Lawrence, “had the tricky task of matching Framestore’s Winnie the Pooh build, as well as finding the ‘essence’ of his character through animation in some key emotional scenes.  Glenn was incredibly collaborative and a true pleasure to work with.”

Corbould meanwhile was special effects supervisor and 2nd unit director on Christopher Robin. Lawrence said of Corbould, “Although this was not perhaps the biggest SFX movie of his career, he had an important role to play. We depended on SFX contraptions to help shoot all the empty plates for our CG characters to live in. On second unit he embraced the challenge of shooting plates that responded intuitively to an animated performance that hadn’t been created yet. SFX also created all kinds of reference elements for us for leaf mulch, water interactions and fog, as well as create a practical flowing river, a moving train buck so that we could use a disused warehouse as a train station, a large WW II explosion and a sinking set!”

Of Gaub, a co-producer on the movie, Lawrence assessed, “His role was unusual because it combined visual effects producer and postproduction supervisor. He was a key creative voice on the show and his position gave him a unique insight into editorial and sound workflow, which became invaluable in post with our very tight schedule.  Steve was incredibly supportive of our craft, creating the space for our animation teams to work and gently but firmly shepherding our final comps across the finish line.”

In the big picture, Lawrence observed, “The tremendous challenge with Christopher Robin was to create characters capable of carrying the emotional heart of the movie and connecting with the audience. Marc (Forster) didn’t want us to come up with anything that would prevent an audience believing that the toys were anything but real but at the same time, as characters, they needed to be able to perform. We achieved this through craft as much as technology – nuanced animated performances, beautiful lighting and lensing, finished off with incredibly detailed simulations of fur and contact with plants, environments and of course: ‘Hunny!’”

Christopher Robin was also nominated for a VES Award for Outstanding Animated Character in a Photoreal Feature on the strength of Tigger.

Ledbury related, “Isle of Dogs is my third stop motion feature as a supervisor, and you never really go into these very collaborative two years-plus projects expecting any VFX recognition, so it’s an honor to be nominated for anything--so with VES being made up of effects professionals makes it particularly special.”

Nominated along with Ledbury for the VES Award are his Isle of Dogs collaborators Mark Waring, Jeremy Dawson and Lev Kolobov. Ledbury shed light on each artisan’s contributions to the film. He noted that animation director Waring “worked closely with director Wes Anderson in achieving the character animation, but was also involved heavily in the design and planning of every animated effect element in the film. His and his team’s many years of experience helped to come up with solutions that made it possible to shoot the whole film using practically shot elements.”

Ledbury described producer Dawson as “the driving force of the production and was involved with every aspect of the film, and utilizing  his background in VFX helped in the finding of practical FX solutions that would fit in to Wes Anderson’s vision.”

And Ledbury defined Kolobov’s principal task as “the building from scratch of the in-house VFX department based at the shooting stages as well as designing its software and color pipeline. He also personally briefed all the VFX artists on the creative and technical aspects for the films 950 VFX shots.”

For Ledbury, the biggest creative challenge that Isle of Dogs posed to him as a VFX supervisor “was keeping a stylistic consistency with the sheer volume of 8,000 elements that needed to be integrated. To put it in context with over 250 sets and 1000 puppets built for Isle of Dogs this was more than the other three films made at 3 Mills Studios London combined  (Corpse Bride, Fantastic Mr. Fox and Frankenweenie).”

Proving deceptively tricky, continued Ledbury, were natural elements such as fire, smoke and water “so a dedicated program of testing and shooting was setup to tackle these effects. Different materials were used such as cotton wool for smoke and dust, metal foil for sparks and colored gels for fire. These were either animated on set supported with bespoke rigging systems that would eventually need to be digitally removed, or shot as a green screen element on a glass table utilizing light passes and multiple camera positions to aid integration and keying, and to help reuse the time-consuming animation.”