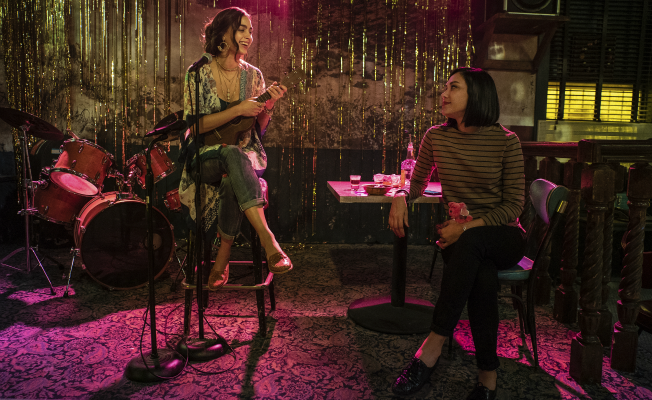 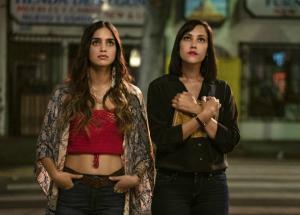 This image released by Starz shows Melissa Barrera, left, and Mishel Prada from the series "Vida," a drama that follows two Mexican American sisters battling gentrification and the aftermath of their mother’s death. (Kat Marcinowski/Starz via AP)
By Russell Contreras
ALBUQUERQUE, NM (AP) --

The Starz drama "Vida" returns for its second season on Sunday with an even deeper exploration of an issue facing many U.S. Latino communities: gentrification.

The show follows Emma and Lyn, played Mishel Prada and Melissa Barrera respectively, who have inherited from their late mother an East Los Angeles apartment building and a lesbian bar. Each must come to terms with their lives in the old neighborhood and unresolved issues around love.

The first season ended with the sisters at odds on whether to continue their lives away from East Los Angeles or come back and save a bar that helped shape them.

It remains one of the only television shows featuring a majority U.S. Latina cast.

With its themes around queer love and sex, the show has gained a small but loyal following and drew critical praise for centering its focus on Latina characters and pressures related to gentrification and gente-fication — the phenomenon that middle-class Latinos are working to change a working-class community. (Gente means people in Spanish).

Executive producer Tanya Saracho said the second season will continue to explore those themes as a backdrop of the overall family drama. "This show is based on what is happening right now" in Latino neighborhoods around the U.S., she said. "All the tactics of protests involving gentrification try to remain authentic."

Saracho said she wanted the show to reflect those realities. But Saracho said the second season also wanted to explore gente-fication. The sisters, if they decide to keep the bar, will be in the center of the gente-fication movement and must deal with any backlash, Saracho said.

Prada, starring in her first lead television role, said she's honored to play a strong young Latina who isn't a stereotypical sexy maid or self-entitled millennial. Emma is a lesbian with a high-powered corporate job in Chicago but is working to come to terms with her family's history — a rare character on television.

"You can see her trying to go back and face her demons," Prada said. "It's a scary place for a lot of people but also a brave place."

Lyn, played by the Mexican-born former telenovela actress Barrera, is straight and always searching for the next party and her next sexual conquest. But Barrera said she, too, must mature in the second season amid pressures on the family to sell the bar to an aggressive developer. She said Lyn is in the middle of experiencing an "awakening" that will transfer her character.

"She's coming to terms with the horrible person she was," Barrera said. "I think in season two we get to explore her and see how she became who she is and how she wants to make her sister proud."

Barrera said she finds it empowering how both sisters control their sexuality and that the show refuses to shy away from lesbian love. "It's powerful to see queer bodies like this," Barrera said.

Prada said she's been blown away by how the production has hired female directors, writers and crew. She hopes this leads to a transformative movement in television.

"You start looking around and see that it's possible," Prada said. "And why not?"