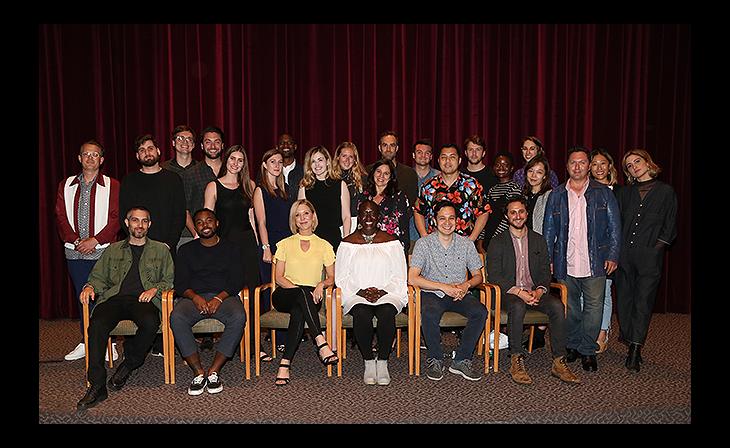 SHOOT New Directors Showcase Class of 2019 at the DGA Theatre in NYC.(photo by Doug Goodman) 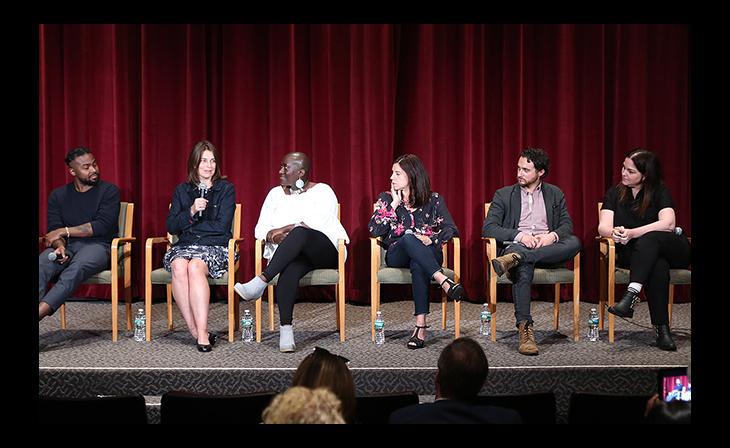 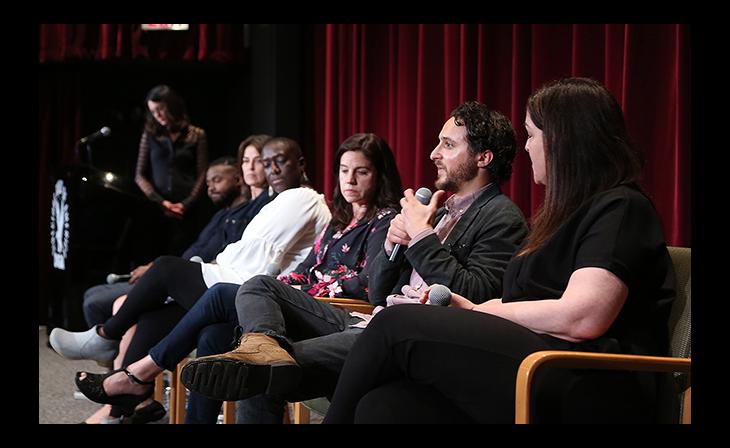 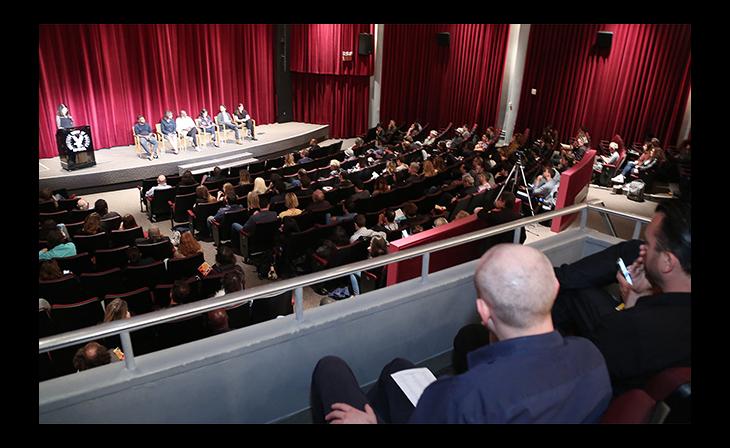 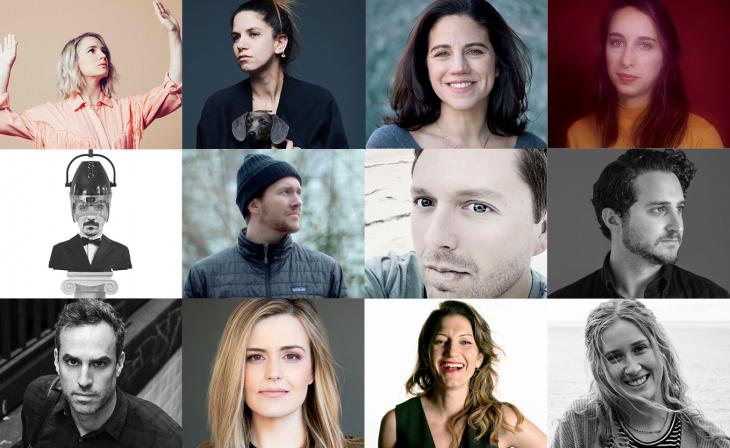 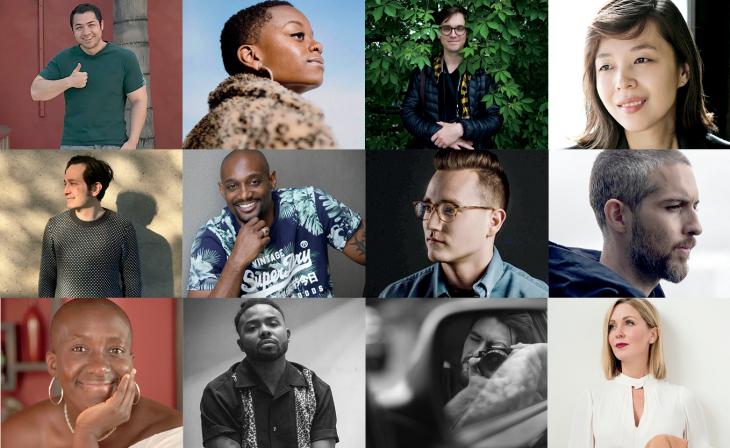 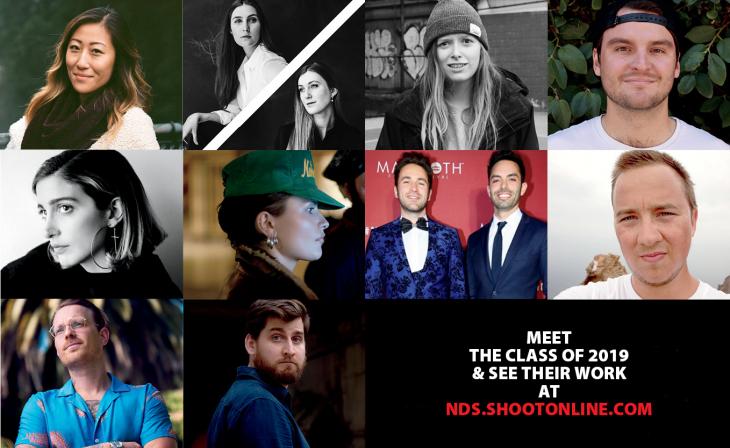 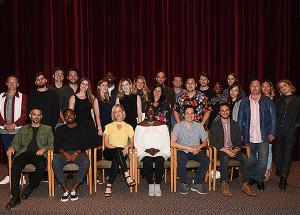 The 2019 New Directors Showcase consisted of 36 up-and-coming directors filling 34 shots (32 individual directors, and two duos). The field includes 18 freelancers. And while recent past Showcases have included strong showings by women, this years tally of 17 females is the highest ever.

Kicking off the proceedings was Mary Hatch, assistant executive director of the DGA. who congratulated the Showcase directors, saying the Guild was there to support them. "Focus on your work while we focus on your rights," affirmed Hatch.

Hatch then introduced Griefer to the audience who in turn presented the debut screening of the 2019 SHOOT New Directors Showcase reel, which contained a sampling of work from each Showcase filmmaker. After the screening, SHOOT held the Meet the New Directors panel discussion in which four of the directors participated, all of whom are unaffiliated with a production company in the ad market:  Lisa D'Apolito, Zack Grant, Tamika Miller and Andre Muir. D'Apolito maintains her 3 Faces Films but she as well as Grant, Miller and Muir are seeking a production house roost for commercials and branded content representation.

D'Apolito earned Showcase inclusion for her documentary Love, Gilda. An intimate profile of the beloved comedian and former Saturday Night Live star Gilda Radner, Love, Gilda opened last year’s Tribeca Film Festival and made its TV debut on CNN this past January. D'Apolito has an extensive ad agency pedigree. She served as a producer for 17 years at FCB Healthcare.

D'Apolito's healthcare specialization had her gravitating to stories of people facing illness, which led to Gilda's Club, an organization founded in memory of Radner who died of cancer. Gilda's Club is a community organization that provides free services, including support groups, educational lectures and healthy lifestyle workshops for people affected by cancer. Through her work with Gilda's Club, D'Apolito witnessed Radner's "amazing legacy," gained access to Radner's diaries and put the wheels in motion for what has become an acclaimed documentary, which also features Radners' comedy contemporaries such as Amy Poehler, Melissa McCarthy and Bill Hader being exposed to and reading from those diaries for the first time.

Showcase director Grant also has agency experience and continues in that role as a producer. Last year, for example, he served as a producer for Droga5 on a couple of SHOOT ScreenWork entries--a comedic IHOP spot directed by Eric Wareheim of PRETTYBIRD, and a poignantly serious PSA from the Brady Center to Prevent Gun Violence directed by Jim Cummings of Here Be Dragons. Grant made his first directorial mark on the agency side when he produced a series of interactive social films for the mouse-trap brand Tomcat. The concept was a a "cabin in the woods" slasher film featuring a cast of mouse puppets who all met violent and elaborate deaths. The agency ended up producing the job in-house on a shoestring budget and by default Grant co-directed the project, which went on to win a Cannes Gold Lion. Fast forward to today and Grant garnered a Showcase slot based on his documentary short Shake With Me, about his mother Debra Magid who is an artist living with Parkinson's disease.  Two years of filming went into Shake With Me, shaping Grant's directorial POV while also affording him what he described as "a cathartic opportunity" to talk to his mom "about things we never talked about." Magid was in the Showcase audience to celebrate her son's selection.

Muir made the Showcase on the strength of 4 Corners, an experimental short film featuring five vignettes of gun violence in Chicago. Muir noted that he found himself becoming anesthetized to the gun violence and wanted to combat that with a straightforward naturalistic look at what it entails--without romanticizing such incidents. He cited that for him among the most powerful scenes was that of a janitor who literally has to clean up after a violent episode, underscoring the people who have to pick up the pieces in the aftermath of tragedy. Muir's first professionally directed work was a music video in 2018 for Ravyn Lenae's song "4 Leaf Clover" featuring Steve Lacy, commissioned by Atlantic Records.

And Miller's Showcase piece was Amazon Echo's spec spot "Get Answers NOW!" which features kids seeking answers elsewhere after their parents are unresponsive. Miller's first narrative short, Gift for Living, helped establish her as a director. The piece won the Showtime Black Filmmaker Showcase Grand Prize and aired on the Showtime network. Miller said that this early accomplishment gave her the confidence to continue to hone her craft and to pursue a career in directing. She was also selected to participate in the Commercial Directors Diversity Program, a DGA/AICP initiative. Out of this CDDP program came Miller's "Get Answers NOW!" Miller over the years worked her way up the industry ranks, first as a production assistant, then a coordinator, followed by production supervising and line producing. She described working in these capacities for leading directors as being her "film school." Miller said that she got into the business because she didn't see herself in media, noting that there wasn't "a queer black woman in front or behind the camera." That and being a storyteller at heart fueled her pursuit of filmmaking. Miller also has to her credit a romantic comedy telefilm, and two spots for Lifetime TV last year commemorating Black History Month--one featuring groundbreaking professional tennis player and golfer Althea Gibson, the other Shirley Chisholm, the first black woman elected to U.S. Congress and the first woman and African-American to seek the nomination for president of the United States from one of the two major political parties.

Unaffiliated filmmakers
Half of the Showcase directors this year are as of yet unaffiliated with a production company. In addition to D’Apolito, Grant, Miller and Muir, the unaffiliated crop of up-and-coming talent consists of: Mary Dauterman for her short film OMW; David Findlay for his short film Laura Lemerveil; Jonny Gentry for GEICO’s “Unexpected” spec commercial; Jose Ho-Guanipa for “My Beauty, My Say,” a piece of spec branded content for Dove; Ji Hyun Kim for the short film HELEN; Katie O’Grady for Nike’s “Behind The Design,” a promo tied into the LAIKA film The Missing Link; Jane Qian for her public service short Phoenix; the Ray Sisters (Austin and Westin Ray) for their “We Are The Daughters” spec PSA; Alfredo Rodriguez-Allen for SimpliSafe’s “The Perfect Security System” spec commercial; Samantha Scaffidi for Oh Pep!’s “Tea, Milk and Honey” music video; Dylan Trussell & David Dinetz for the Wolf & Shepherd commercial “Dress Shoes Like Sneakers”; and Dimitri Tsvetkov for “Panarea,” a piece of branded content for American Apparel.

Company ties
The Showcase directors affiliated with production companies are: Caitlin Cronenberg of Untitled Films, Toronto, for The Centre for Addiction and Mental Health Foundation's "Oxygen"; Jess Coulter of O Positive for the Dunkin' commercial "Drag"; Bernd Faass--who’s handled by Park Pictures (US/UK) and Element E/Anorak in Germany--for Tears Dry Gin’s branded content piece, “Tears In Heaven”; Brian Hall of Finch Pharaoh Films for the Mercedes-Benz spec spot "Stuntman"; Rachel Annette Helson of Kass Management for her short film Hatched; Alexandra Henry of Valiant Pictures for her documentary feature Street Heroines; Mackenzie Hilton of Thinking Machine for Semester At Sea’s short film, Learning to Swim; Crystal Kayiza of Little Minx for her documentary short Edgecombe; Emmett Kerr-Perkinson of Pan Up Productions for Tinder’s “Our Story” spec spot; Nadav Kurtz of Dictionary Films for “Ana,” branded content for LIFEWTR; Monty Marsh--who’s handled by The Directors Network, Lightswitch Content and Invisible Collective--for Adidas Originals’ “Original Is Never Finished” spec commercial; Jonny Mass of m ss ng p eces for “The Journey,” a piece of branded content for BMW; Michael Medoway of The Lodge for the Lexus branded short, The Art of the Dunk; Jamieson Mulholland of ONE at Optimus for an “Illegal Mezcal” commercial; Charlotte Regan of Knucklehead for Wretch 32’s music video, “His & Hers (Perspectives)”; Cuba Tornado Scott of RSA Films for the Accor/Fairmont Hotels' short film 9 1/2; Mikael Tyrsen of NUCONTEXT for the Pretty Little Liars: The Perfectionists promo; and Jake Zalutsky of Picture North for “Who We Are,” a commercial for USA National Hockey.

Mehling said that looking for new talent is "an important part of our company's ethos," noting that director Angie Bird is gaining recognition for her recently debuted "First Shave" spot for Gillette out of Grey Canada which captures the moment when Toronto-native and trans advocate Samson Brown first used a razor to shave himself, all under the watchful and caring guidance of his father. Samson’s story recognizes that having the confidence to express one’s true, authentic self can be a journey--one that Gillette fully supports. Bird wrapped the job prior to joining Chelsea last year but now that "First Shave" has been unveiled, it's already been shortlisted for a Cannes Glass Lion.

Mehling said of new filmmakers, "The industry needs you. We all need to be surprised and challenged."

Meanwhile panelist Jose, recently promoted with Amber Wimmer to co-head of production at Forsman & Bodenors NY, has been with that agency since July 2015, overseeing the production process for broadcast, social video and print work. Her TV commercial and social platform endeavors have spanned such clients as the Ad Council, American Express, Procter & Gamble, JBL, Homegoods, Dean Foods, Hyatt and Monster. Earlier in her career, she was focused on feature production and international film sales, having worked on projects with such directors as David Gordon Green, Woody Allen, Spike Lee, David Mamet, John McNaughton, Sebastian Silva and Lee Daniels.

Jose noted that Forsman & Bodenfors is "always on the hunt" for talented unaffiliated directors, particularly for social work that is done in-house. She added that opportunities are growing and the nature of them are changing as the advertising and entertainment sectors mesh. For example, the agency recently turned out a five-part episodic shoot for a documentary series, all for a client whom she wasn't at liberty to publicly identify. Jose added that the client's product is NOT featured in the show.

Earlier in the day, as part of the New Directors Showcase Event, SHOOT held its In The Director's Chair session with two-time DGA Award winner Matthew Heineman, and a panel discussion about "Living on the Cutting Edge of Content." Coverage of these sessions will appear in next weeks SHOOT>e.dition and on SHOOTonline. Videos of the afternoon sessions and evening "Meet the New Directors" panel will go live on SHOOTonline next week.  Event and party photos will be going live in the next few days.

Lead sponsors of the 2019 SHOOT New Directors Showcase Eent were the DGA, GARTNER, The Devil You Know and My SHOOTonline. Silver sponsors were McCann Worldgroup and The-Artery. Bronze sponsor was charlieuniformtango. And industry supporter was advertising and entertainment law firm FKKS.

SHOOT’s 17th annual New Directors Showcase--which was celebrated with an evening screening and panel discussion at the DGA... 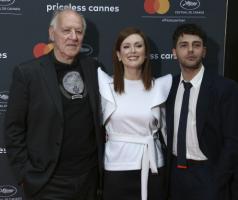 May 24, 2014    The Cannes Film Festival’s Palme d’Or was bestowed upon Winter Sleep, an intimate, wintry epic set on Turkey’s Anatolian...

SHOOT has revealed the slate of speakers for select sessions at its 2019 New Directors Showcase Event to be held at the DGA Theatre in NYC on Thursday, May 30.  The event includes an...

SHOOT Magazine has revealed the names of the 32 individual directors and two directing duos who made the final cut to be included in the SHOOT 2019 17th Annual New Directors...