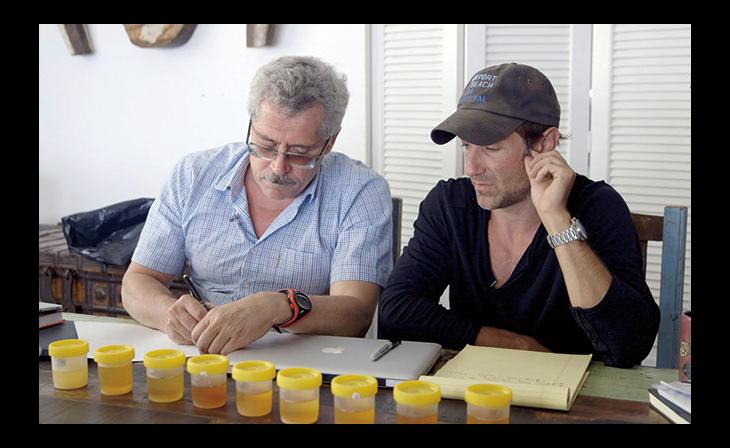 Dr. Grigory Rodchenkov (l) and Bryan Fogel in a scene from "Icarus" (photo courtesy of Netflix) 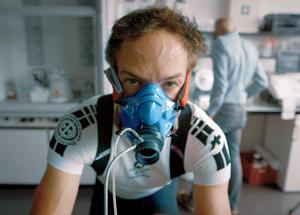 Bryan Fogel’s auspicious debut as a documentary filmmaker is a testament to his adaptability as the story he intended was relegated to the backburner when a much bigger, all encompassing tale emerged.

And his deft handling of that tale has yielded Icarus, which recently won the Best Documentary Feature Oscar along with earning a DGA Award nomination, and an Orwell Award from the 2017 Sundance Film Festival, among other honors.

Fogel originally intended to delve into sports doping and how star athletes—such as champion cyclist Lance Armstrong—are able to avoid detection, passing assorted drug screening tests. Icarus follows Fogel as he takes performance-enhancing drugs to see if they will strengthen his endurance as an amateur bike rider. He then seeks out help on how to test clean, leading him to Dr. Grigory Rodchenkov, a maverick Russian scientist who’s expert at beating the system. Over a period of months, the two form a bond as shocking allegations emerge placing Rodchenkov at the center of Russia’s state-sponsored Olympic doping program. For Fogel, the first-hand guinea pig premise of his documentary gives way to a much more significant story, arguably the biggest international sports scandal in history which he and Rodchenkov are positioned to expose to the world at large. Rodchenkov eventually flees to the U.S., leaving his family behind and in fear for his life.

Fogel recalled, “The first thing Grigory does when he gets off the plane [in the U.S.] is he hands me a hard drive and he says, ‘Don’t lose this....It’s everything.’” It turns out “everything” was “thousands of spreadsheets and documents, many of which ended up in (World Anti-Doping Association investigator Richard) McLaren’s final report. So it was scary. I was saying to different people on my team: ‘You take a hard drive, you take a hard drive, you take a hard drive.’ I sent the hard drives to different locations, getting safety deposit boxes. It was very surreal because all of a sudden I was at the center of it...I was literally the go-between for Grigory and WADA (World Anti-Doping Association) and the IOC (International Olympic Committee), and I was sitting in meetings with the world leaders of sport saying, ‘Here’s what they did, here’s the evidence. Here’s where you’ll find the bodies, the blood, the bullets. Go.”

At the proverbial blink of an eye, Fogel was no longer the film’s protagonist—that distinction getting passed on to Rodchenkov. Furthermore Fogel took on a role beyond that of documentarian—namely that of protector and guardian for Rodchenkov. “Nobody else had the info, the evidence he had. We had to preserve this story—and preserve him,” said Fogel. “Every day we were navigating the process, protecting Grigory so we could continue our journey to tell his story.”

Icarus takes on an almost hybrid form of a documentary that plays much like a narrative feature thriller. Rodcheknov’s story as chronicled in Icarus played a major role in the International Olympic Committee’s original decision, announced in December 2017, to ban Russia from participating in the 2018 Winter Games. In the ensuing weeks, though, loopholes emerged in that ban, allowing many Russians—without an official flag or government delegation—to compete in the Winter Olympics.

Fogel cited George Orwell’s observation that “sport is war without the weapons.” And for an event such as the Olympics, sport, noted the documentarian, is “a geopolitical weapon showing the power and strength of a country,” a concept which Russian President Putin has embraced as his approval rating in Russia “skyrockets” with each Olympic victory.

“That’s why Grigory coming forward with these truths is so important,” affirmed Fogel who touched upon the added significance of this when put into a big picture context. Serving as a presenter at the Cinema Audio Society Awards last month in Los Angeles, Fogel said that Icarus shows “the lengths to which Russia will go to meddle into international affairs,” paralleled to Russia’s meddling designed to undermine elections in other countries, including the U.S.

Netflix
The success of Icarus, affirmed Fogel, is also attributable to Netflix on different fronts. At the 2017 Sundance Film Festival where Netflix acquired Icarus, Fogel noted, “At that time, we all felt the film could be better. We all wanted to continue working on the film coming into Sundance,” recalled Fogel. “We delivered our Sundance cut at 8 am on the day we were premiering at 11 in the morning. As proud as I was of that Sundance cut, creatively I felt the film could be made stronger, further polished and crafted. Netflix gave me the creative runway to do that. They allowed me five months after Sundance to continue to craft and work on the film.”

And then there’s the global exposure provided by the Netflix platform. During a Doc Roundtable at last year’s AFI Fest, Fogel noted that more people are “caring about documentaries than ever before because of Netflix,” which brings a reach of 190 countries spanning 120 million homes and 600 million people. It’s nirvana for documentarians “if your goal is to have your film seen,” he said, whether it be on TV, a computer, an iPhone or any other streaming media device.

As for what his filmmaking future holds, Fogel is exploring the scripted space, both features and TV, as well as continuing to consider documentary projects. Furthermore, he is mulling over options in the shorter format world as he is on the roster of production house Supply&Demand for commercials and branded content.

Back to Director's Series Intro 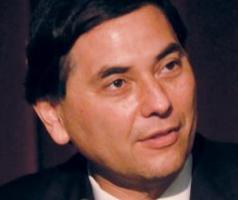 Welcome to the Special Fall 2019 e.dition of the SHOOT Directors Series. Our mix of profiles includes Marielle Heller who directed two Academy Award-nominated performances this year by...

SHOOT will publish a Special Directors>e.dition on Monday, October 28, that will contain the entire Directors Series section from SHOOT’s October/November print issue (... 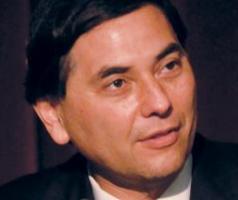 SHOOTonline will publish a Special Directors>e.dition on Monday, October 29, that will contain the entire Directors Series section from SHOOT’s October/November print issue (including... 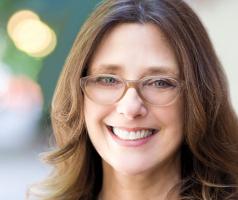