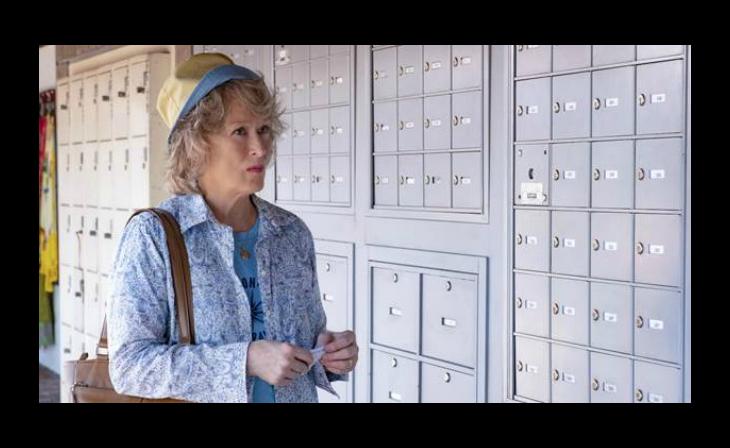 This image released by Netflix shows Meryl Streep in a scene from "The Laundromat," in theaters on Sept. 27. (Claudette Barius/Netflix via AP) 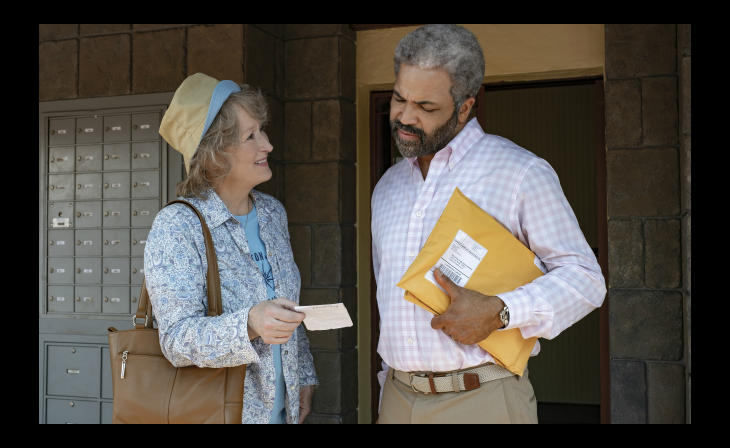 This image released by Netflix shows Meryl Streep, left, and Jeffrey Wright in a scene from "The Laundromat," in theaters on Sept. 27. (Claudette Barius/Netflix via AP)
Prev Next 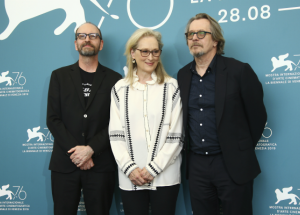 This Sept. 1, 2019 file photo shows director Steven Soderbergh, from left, and actors Meryl Streep and Gary Oldman at the photo call for the film "The Laundromat" at the 76th edition of the Venice Film Festival in Venice, Italy. The film will be released in U.S. theaters on Sept. 27. (Photo by Joel C Ryan/Invision/AP, File)

Meryl Streep is describing "the Darwinism of the moment" and not just because her latest film, the Steven Soderbergh-directed Panama Papers satire "The Laundromat," opens with cavemen.

She's talking about the explosion of norms and the niceties of human interaction. We're in an era, she believes, where only the strongest prevails.

"So how do we get the strong to stay principled? How do we do that?" Streep says. "Because the unprincipled want to march up front and take the lead. That's what's happening."

It's a concern that has come to almost consume Streep, one of the most vocal critics of President Donald Trump. And it's shaping the films she's making. "The Laundromat," like her last "Papers"-based movie — the 2017 freedom-of-the-press thriller "The Post," about the publishing of the Pentagon Papers — is a rallying cry.

"My own brain is so scrambled with exigencies and what really needs to be said, needs to be done," Streep says. "All I have are my talents to entertain and to broadcast something in some different variety of ways. It's like raising children: Anything to get the message in. What's it take?"

"The Laundromat," which opens in theaters Friday and debuts on Netflix Oct.18, is one of the more audacious attempts to answer that question. It takes some of the densest, most complicated information and filters it into a fourth-wall-breaking farce that culminates with a rousing challenge, a call to arms.

Loosely based on Jake Bernstein's "Secrecy World," the splintered stories of "The Laundromat," penned by Scott Z. Burns, are derived from the 2015 data breach known as the Panama Papers. That trove of some 11.5 million documents, leaked by a whistleblower and analyzed by the International Consortium of Investigative Journalists, pulled the curtain back on the cloaked international network of offshore shell companies shielding billions of untaxed dollars.

Inspired partly by the Argentinian anthology romp "Wild Tales," ''The Laundromat" is a comical stroll through the evolution of our monetary system (thus the cavemen) that weaves together a handful of the 200,000-plus tales of the Panama Papers. Gary Goldman and Antonio Banderas play the lawyers whose firm, Mossack Fonseca, was at the center of the scandal, as well as our martini-swilling, tuxedoed narrators. Streep plays Ellen Martin, a woman trying to navigate the byzantine layers of shell companies in search of an insurer that will take responsibility for her husband's death in a tour-boat accident.

Soderbergh wanted "The Laundromat" to be a brisk and buoyant comedy about a dark and dirty business.

"Every serious problem that we're facing right now as a species can be traced back to some form of corruption. And the trajectory of it is pretty alarming. In 2000, the top 50 financial elites owned a third of the world's wealth. Now they own a half. That's not sustainable," says Soderbergh. "It's either going to get rebuilt by agreement or it's going to get rebuilt some other way that's not as pleasant."

"The historical way," chimes Streep. "All that money could be solving all the problems. Instead, it's going into yachts."

Soderbergh and Streep, who recently sat for an interview the morning after the film's premiere at the Toronto International Film Festival, haven't worked together before. But it was perhaps inevitable that they would given Streep's eagerness to make movies that can catch up to the news. Soderbergh is known as one of the fastest-moving filmmakers around. Last month they shot another film together, "Let Them All Talk," in just 13 days.

"We have an intermediary love affair with Mike Nichols," says Streep. "He loved Steven's work and always said, 'You have to work with him. But not until you look at this script that I have for you.'"

"I don't know why it took so long. It seems stupid," says Soderbergh. "But we're trying to make up for that."

To write "The Laundromat," Burns worked closely with Bernstein, a Pulitzer Prize-winning journalist who was heavily involved in the ICIJ's reporting. A regular collaborator with Soderbergh, Burns ("The Informant!" ''Contagion") knew the director's interest would only be piqued by something formally daring. But he wondered what Bernstein would make of such a high-concept approach.

"I was really worried as I was writing this that he would rush in waving his hands going, 'What are you doing to our journalism?' He never said that. He very quickly understood what we were trying to do," said Burns alongside a nodding Bernstein. "We wanted this to mean something to every person. The fact that the world's financial system is structured this way is having an adverse effect on everybody."

Burns' screenplay immediately appealed to Soderbergh. He calls "The Laundromat" ''a culmination" for him that drew on all of his filmmaking experience. His fascination with money goes back, too; during the director's hiatus from Hollywood, one of the paintings he produced depicted a fantastical kind of currency.

Streep responded to the film's directness.

"It's almost like we're exhausted by metaphor now," Streep says. "You can start there. You can dance around it. But then you gotta go: 'You know what? You know what?! Pay attention! Wake up!'"

It's difficult to talk about "The Laundromat" without discussing its ending. But suffice to say, the film ends in a stripped-down flourish that playfully deconstructs the high-concept hijinks that precede it. Part of that set up (and skip the following paragraphs if you want nothing ruined) involves a secondary performance involving Streep in the guise of a mysterious Latin woman working inside the firm.

Some critics have taken issue with that element of "The Laundromat." (Vanity Fair called it a "galling unforced error" given concerns about representation on screen.) When asked about it, a previously unseen publicist suggested the interview "move along." But Soderbergh and Streep said they were happy to defend those scenes. "It's going to come up," said Soderbergh. "We can talk about it."

He stressed that for the film's payoff finale, it has to be Streep's character, Ellen, in an intentionally bad disguise.

"It's a very specific trick that is necessary to set up a very important piece of narrative architecture that's going to be paid off in the final shot. She has to play that part. She has to be disguised. But there has to be something about her that you look at and go, 'Something's up,'" says Soderbergh. "I knew we're probably going to get some heat for that. But in this specific comedic context in the narrative structure, this has to happen."

"For me, it's like spy craft. Spies do all sorts of things to get information," says Streep. "I think Ellen went underground. But she doesn't really fit in. It's not that good."

They each imagine "The Laundromat," in the spirit of "Dr. Strangelove," as an over-the-top, shape-shifting satire built for worrisome times. Streep, who famously criticized Trump in a 2017 Golden Globes speech, drawing his ire on Twitter, shudders thinking about the country's predicament.

"It's actually impossible to be an artist and not react to it," she says. "Everything you do is, by default, helping or hurting."

But for her, not everything is doom and gloom. "The Laundromat" may harken back to an earlier kind of social satire, but those days — the '60s and '70s — weren't all they're cracked up to be, she says.

"The so-called halcyon days of 'The Godfather' and 'Taxi Driver' and everything, there was a group of people excluded from that: filmmakers of color and women. The stories were not interested in women, famously. I think 'Alice Doesn't Live Here Anymore' was Scorsese's only. It was not where the imagination of the people writing about movies lived and it wasn't where the filmmakers lived. You live out of your own story."

That, she says, has changed. Greta Gerwig's upcoming "Little Women," in which Streep co-stars, would never have been made in the '70s, she says. 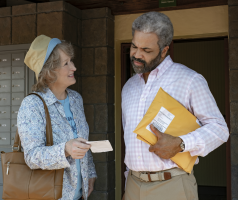 Netflix has released a movie based on the so-called Panama Papers despite an attempt by two lawyers to stop the streaming premiere.

It may be the oldest film festival in the world but at 76, the Venice International Film Festival is more relevant and divisive than ever.

Kicking off Wednesday in the normally sleepy beach... 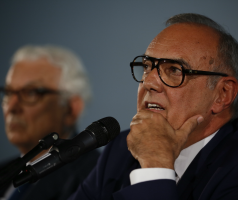 The 76th Venice Film Festival will feature three Netflix productions alongside Hollywood titles, embracing the streaming giant after the Cannes Film Festival excluded it for a second year in a row...