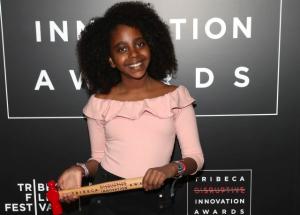 During a ceremony on Tuesday (4/24) at the Tribeca Festival Hub at Spring Studios, the 9th annual Tribeca Disruptive Innovation Awards (TDIA) honored a diverse field of disruptors, revolutionaries, and game-changers whose breakthroughs are creating radical solutions to some of the world’s most vexing problems.

Highlights from the program included:

Wadler, the 11-year old #NeverAgain activist who made an empowering speech at the March for Our Lives earlier this year, received a standing ovation as she took the stage to accept her Tribeca Disruptive Innovation Award. She spoke passionately about the recent Waffle House shooting, pointing out the racial inequality and the bias of the shooter’s race, calling into light that “if the shooter had been a person of color, he would not have been offered bail.”
George Clooney appeared in a surprise on-screen message, congratulating Wadler and fellow student activist Carter Anderson, saying that they “remind us that the next generation won’t settle for the status quo and in demanding change, you give us all hope. This is an encouragement to keep going.”
Before honoring Ausch for her Netflix documentary, One of Us, Fran Lebowitz asked if fellow Tribeca Disruptive Innovation Award winner Dr. Hassanein of TransMedics could help with a very urgent transplant--“a heart and a brain for President Donald Trump.”
Dr. William Magee, founder of Operation Smile, offered 7-year old Tribeca Disruptive Innovation Award recipient Madden Humphries the opportunity to be a world ambassador for the organization.
Koko Kondo, Hiroshima atom bomb survivor, was brought to tears on stage as she was joined by Nobel Peace Prize Laureate Beatrice Fihn to plant “seeds of change,” harvested from amongst the 150 surviving trees in Hiroshima, as a metaphor for the resilience of the human spirit, 72 years after the bombing.

Here’s a rundown of TDIA winners:

DJ KOOL HERC
Founding Father of Hip Hop
Herc is a disruptive and innovative pioneer and creative force in the world of hip hop and rap music. 2018 marks the 45th Anniversary since the first ever hip hop party took place on August 11th, 1973 at 1520 Sedgwick Avenue in the Bronx, giving birth to the Hip Hop culture. Influenced by his Jamaican upbringing, Kool Herc pioneered the “Merry-Go-Round,” his signature DJ style, which took advantage of the crowd’s reaction to percussion breakdowns of popular tunes.

LEILA JANAH
Founder & CEO, Samasource and LXMI
Christensen Prize
Janah is the Founder and CEO of Samasource and LXMI, two companies that go beyond charity to #givework to low-income people around the world using cutting-edge social enterprise models in technology and luxury skincare, respectively. She is the author of the book Give Work, released by Penguin/RandomHouse in September. Leila and her team’s work and impact has been featured widely in the press. She lives partly in San Francisco and New York City.

HOWARD W. BUFFETT
Associate Professor & Research Scholar
Adam Smith Prize | Presented By Harvard Business Review
Buffett is an associate professor and research scholar at Columbia University. He is coauthor of Social Value Investing: A Management Framework for Effective Partnerships, which analyzes innovative collaboration across sectors and outlines a new methodology to measure social and environmental impact called Impact Rate of Return. He previously served in the U.S. Department of Defense overseeing programs in Iraq and Afghanistan, and was a Policy Advisor for the White House Domestic Policy Council.

MICHIKO KAKUTANI
Author, “The Death of Truth”
Book of the Year | Presented By Harvard Business Review

ETTY AUSCH
Featured Story in “One of Us” | Activist
Fran Lebowitz Prize
Ausch was born into the ultra-orthodox, Hasidic community of Brooklyn, NY. After following a life that was prescribed by a community, she finally found the courage to leave and live her authentic self.  She bravely dealt with issues of religious doubt, domestic and sexual abuse. The adversity she overcame as she left her former community has motivated her to help others suffering from social ostracization. Her vision is to work in providing assistance for vulnerable and underprivileged populations. Her story is featured in Netflix’s documentary, One of Us.

ELLE REEVE
Correspondent, Vice News Tonight
Reeve is a correspondent for the Emmy award-winning nightly newscast “VICE News Tonight” on HBO. Prior to VICE, Elle was at the New Republic, where she covered politics, culture, and trends in technology. In August 2017, Reeve gained critical acclaim for her reporting on the white nationalist rally in Charlottesville, VA. for VICE News Tonight. Reeve’s extraordinary access coupled with immersive on-the-ground reporting provided viewers with an unforgettable window on an American tragedy and helped to shape the national dialogue on race relations.

SHEILA NEVINS
Executive Producer, Former President of HBO Documentary Films
Lifetime Achievement Award
Having radically transformed the documentary film genre into a provocative and indispensable tool for understanding the human condition, Nevins is an executive producer and former president of HBO Documentary Films. She was responsible for overseeing more than 1500 documentaries for HBO, HBO2, Cinemax, and HBO Family. As an executive producer or producer, Nevins received 32 Primetime Emmy® Awards, 35 News and Documentary Emmys® and 42 George Foster Peabody Awards. During her tenure, HBO’s critically acclaimed documentaries have gone on to win 26 Academy Awards®. She is the author of The New York Times bestselling humor book You Don’t Look Your Age...and Other Fairy Tales.

TARANA BURKE
Civil Rights Activist | Director For Gender Equity
Burke is an civil rights activist who in 2006 began using the phrase “Me Too” to raise awareness of the pervasiveness of sexual abuse and assault in society.

STEVEN PERRY
Assistant Principal & Head, Agriculture Department, John Bowne High School
Perry is the assistant principal/head of the agriculture department at John Bowne High School. As an alumnus, Perry accepted began teaching in the Agriculture Department in 1983. In 1996, Steve became Assistant Principal, Supervision/Agriculture. He has doubled the program’s enrollment and expanded its curriculum including: Aquaculture, Hydroponics, Large Animals, Aviculture, Aquaponics and Herpetology.  He has been instrumental in the 9/11 Memorial Survival Tree Seedling Program, which donates seedlings from the 9/11 survivor tree to 9/11 memorials and communities that have overcome tragedy. These seedlings are housed and cared for by his students in conjunction with Bartlett Tree Experts.

NICHOLAS VITA
Co-Founder & CEO, Columbia Care
Vita is the co-founder and CEO of Columbia Care—the largest medical cannabis product development, manufacturing and dispensing operator in the US. With 25 years of experience as an executive at the intersection of finance and healthcare, Vita drives Columbia Care’s commitment to operate as a mission-based healthcare company with the highest standards of patient care. Ensuring the well-being of his mother and son serve as the foundation for his passion and motivation to bring this novel treatment option to patients.

DEBORRA-LEE FURNESS
Actress | Co-Founder, Hopeland
Furness is an internationally acclaimed actress and passionate advocate for vulnerable and abandoned children. She is the co-founder of Hopeland, whose mission is to put awareness of orphaned and vulnerable children front and center on the global community’s agenda.  Furness previously founded National Adoption Awareness Week and Adopt Change in her homeland of Australia. She has been honored by Joint Council USA, Congressional Coalition on Adoption, and most recently with the 2017 United Nations Women for Peace Leadership Award.

JOSEPH LUBIN
Co-Founder, Ethereum | Founder, Consensys
Lubin is the co-founder of the blockchain platform, Ethereum, and founder of ConsenSys, one of the largest and fastest-growing blockchain companies in the world. In 2014, Joseph co-founded the Ethereum Project and founded ConsenSys as a venture production studio focused on building developer tools and decentralized applications on the Ethereum platform. Prior to working on Ethereum, Lubin’s career focused on the intersection of cryptography, engineering and finance, including his role as VP of Technology in Private Wealth Management at Goldman Sachs.

OPHER BRAYER
Entrepreneur | Business Mentor |Innovator
Brayer is an extraordinary individual whose lifetime of work in developing original methodologies to cultivate multi-talented ‘genius’ in young and old have been lauded by organizations around the world. A self-made entrepreneur, business mentor, teacher, innovator and former jazz musician, Opher’s STAGES educational movement is currently being rolled out to students across the Czech Republic. With a focus on evolving human ecosystems, STAGES aims to end global poverty by transforming entire regions through education, employment and the environment.

NAOMI WADLER and CARTER ANDERSON
Student Activists
Wadler and Anderson are 11 year old student activists from Alexandria, Virginia. Friends since Kindergarten, Wadler and Anderson led a student walk out at her elementary school in Alexandria, Virginia on the one month anniversary of the senseless shooting at Marjory Stoneman High School in Parkland, Florida.  Her school walk out was 18 minutes long, 17 minutes for each student and teacher who lost their lives in Parkland, and one additional minute for Courtlin Arrrington, an African American student who was murdered shortly after the Parkland shooting in her Alabama high school.

BEATRICE FIHN
Nobel Peace Prize Laueate | Executive Director, ICAN
Hersey Prize
Fihn is the executive director of the International Campaign to Abolish Nuclear Weapons (ICAN), the 2017 Nobel Peace Prize-winning campaign to prohibit and eliminate nuclear weapons. The campaign won the prize for their work to draw attention to the catastrophic humanitarian consequences of any use of nuclear weapons and for its ground-breaking efforts to achieve a treaty-based prohibition of such weapons. Finn and ICAN brought public mobilization and hardcore diplomacy to win the Treaty on the Prohibition of Nuclear Weapons, by focusing on the humanitarian impact of any nuclear weapons use

CHRIS MESSINA
Inventor of Hashtag
Messina is the inventor of the hashtag for social media.  This one simple symbol ( # ) is a sublime case of a disruptive innovation that has made mass communication simpler, cheaper and more accessible. Its universal usage and simplicity has empowered instantaneous social movements via social media such as #metoo, #NeverAgain and #blacklivesmatter to name a few. The hashtag has pushed communication capabilities to the periphery while embracing the ethos of open source enabling transformational global conversations.

KOKO KONDO
Atom Bomb Survivor | Peace Activist
Kondo is a prominent atomic bomb survivor and internationally recognized peace advocate. She was eight months old when the U.S. dropped an atomic bomb on Hiroshima on August 6, 1945. Kondo has spent her adult life working with various organizations to promote peace around the world. She tells stories about Hiroshima and gives lectures at schools for students from elementary to graduate school. Koko has long been involved with the organization Children as the Peacemakers, and also accompanies the American University Nuclear Studies Institute’s annual study abroad trip to Hiroshima, Nagasaki, and Kyoto. She also continues as a counselor at the Hiroshima Peace Center.