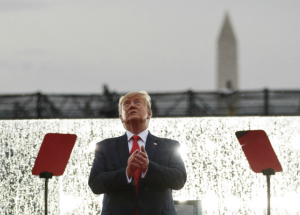 President Donald Trump looks up during the military flyovers at the Independence Day celebration in front of the Lincoln Memorial, Thursday, July 4, 2019, in Washington. The Washington Monument is in the background. (AP Photo/Carolyn Kaster)

Fox News reached an average of 4.09 million viewers between 6 and 8 p.m. EDT last Thursday for its coverage of Trump’s much-discussed holiday parade in Washington, D.C., the Nielsen company said. The audience was over 4.6 million during the concentrated hour during which Trump gave a rain-soaked speech.

Those are strong numbers for the Fourth of July, traditionally one of the least-watched days of the year for television as people concentrate on outdoor activities. During the same time last July Fourth, Fox had 1.29 million viewers, Nielsen said.

It was even more than double Fox’s average viewership for the time slot for a typical workday this year.

Fox was the only commercial television network to say ahead of time that it would air Trump’s speech. CNN, which also aired it and had 1.4 million viewers, did not disclose its coverage plans before the event. MSNBC did not air the speech and had 397,000 viewers, Nielsen said.

The week’s most popular television event started Sunday morning, when the U.S. women’s soccer team beat The Netherlands for the World Cup before 14.3 million viewers.

Behind the summertime favorite “America’s Got Talent,” NBC averaged 3.5 million viewers in prime time last week. CBS had 3.4 million, ABC had 2.8 million, Fox had 1.6 million, Univision had 1.5 million, ION Television had 1.4 million, Telemundo had 1 million and the CW had 560,000.

Fox News Channel was the week’s most popular cable network, averaging 2.01 million viewers in primetime. MSNBC had 1.16 million, HGTV had 1.14 million, USA had 1.05 million and TLC had 1 million.

ABC’s “World News Tonight” topped the evening newscasts with an average of 7.8 million viewers. NBC’s “Nightly News” had 6.8 million and the “CBS Evening News,” where Norah O’Donnell takes over as anchor next week, averaged 5.1 million.

Below are primetime viewership numbers compiled by Nielsen for July 1-7. Listings include the week’s ranking and viewership.