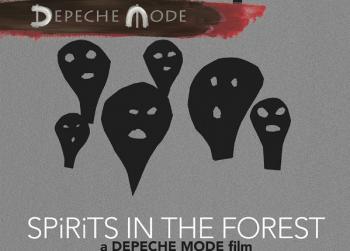 BBH Entertainment, the development arm of the global creative agency BBH, specializing in the intersection of advertising and entertainment, is co-producer of Depeche Mode’s new film, SPIRITS in the Forest, along with Trafalgar Releasing and Sony Music Entertainment.

The feature-length documentary and concert film, which celebrates the impact of Depeche Mode’s music and performances, is coming to cinemas worldwide for a one-night event on November 21.  Directed by award-winning filmmaker Anton Corbijn,  the film follows the band’s 2017/2018 Global Spirit Tour, and dives into the deeply emotional stories of six special Depeche Mode fans.

“Growing up in Sweden, I would line up in the freezing cold to wait for Depeche Mode tickets, and I know first-hand that Depeche Mode, which arguably has the biggest fanbase in the world, is more than a band for so many people,” said Pelle Sjoenell, BBH worldwide chief creative officer and co-producer of the film. “This film is a truly unique music documentary as it is told from the fans’ point of view. The fan stories in the film are inspiring and relatable, illustrating how music can empower people and break down boundaries.”

“Following BBH’s win at the BAFTAs for best short film, we are thrilled to be partnering with an iconic band on this full-length feature film, which was inspired by our work engaging Depeche Mode’s fans on a highly successful social media fan takeover campaign timed around the band’s global world tour,” said William Swann, head of entertainment and executive producer at BBH. “The film demonstrates the strength of our entertainment offering, which encompasses original IP as well as IP created with brands, and we are very excited to see the film premiering in theaters worldwide.”

In addition to the film, BBH Entertainment is also working with Fremantle Media to develop and co-own brand-friendly TV and digital formats and stand alone (without brands) unscripted TV formats currently being pitched to networks, as well as executive producing a scripted drama series by Lena Waithe for Dove debuting spring of next year.