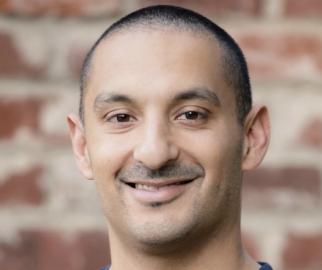 Effie Worldwide, the marketing industry’s leading effectiveness organization and organizer of the Effie Awards, has launched the inaugural Global Best of the Best Effie Awards, crowning the world’s most effective marketing efforts.

The 2020 Global Best of the Best Effie Awards is open to all 2019 Gold & Grand Effie winners from Effie’s regional and national programs. These previous winners now have the opportunity to compete at a global level, honoring ’the best of the best’ in marketing effectiveness worldwide including the ultimate recognition--the Global Grand Effie Award.

Two rounds of rigorous judging will determine finalists and winners in 20+ entry categories from Automotive to Finance and Data-Driven to Positive Change. A Grand Jury will then convene to select one supreme winner of the Global Grand Effie Award. 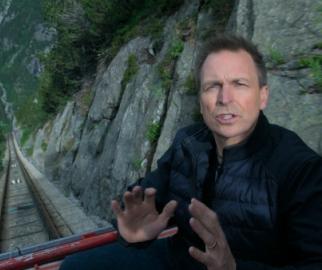 This image released by CBS shows host Phil Keoghan in a scene from last season's competition series "The Amazing Race." CBS said in a statement Friday, Feb. 28, 2020, that it had temporarily suspended production on the show’s 33rd season as a precaution due to the virus outbreak affecting several countries. (CBS via AP)
LOS ANGELES (AP) --

The globe-trotting reality series "The Amazing Race" is taking a breather as a precaution due to the virus outbreak affecting several countries.

CBS said in a statement Friday that it had temporarily suspended production and was sending contestants and crew members home as a precautionary measure. Filming on the show's 33rd season was in its early stages.

"At this time, no racers or anyone on the production team traveling with them have contracted the virus, or shown symptoms, and we are not aware of anyone being exposed to it," a network spokesperson said in a statement. "Out of an abundance of caution, everyone involved in the show will continue to be monitored when they return home."

Nearly 60 nations have reported cases of coronavirus, including China where the current outbreak emerged. China has the majority of confirmed cases and has reported more than 2,700 deaths.

In Asia, attractions including Tokyo Disneyland and More 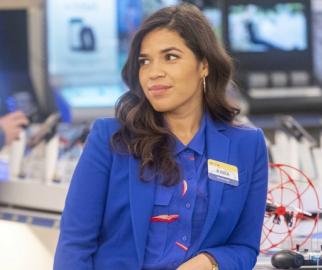 This image released by NBC shows America Ferrera as Amy in a scene from the comedy series "Superstore." Ferrera says she’s departing the NBC sitcom after its current season. The season five finale will air on April 18 at 8 p.m. EST. (Ron Batzdorff/NBC via AP)
LOS ANGELES (AP) --

Ferrera plays the manager of a big box store in the show, which has already been renewed for a sixth season. The actress also serves as an executive producer on the series and has directed several episodes.

"The last five years on 'Superstore' have been some of the most rewarding, enriching and enjoyable years of my career," Ferrera said in a statement Friday.

The actress became the first Latina actress to win the top comedy actress Emmy Award for her the title role in the series "Ugly Betty" in 2007.

She announced on New Year's Eve that she is expecting her second child.

"As I start the next chapter for my family and career, I wish only the best, and much continued success, to my beloved 'Superstore' family," Ferrera said in her statement.

The season five finale will air on April 18 at 8 p.m More 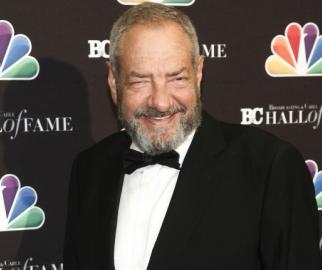 The pickups for the "Law & Order" series and Wolf's three Chicago-set dramas are part of a new five-year deal to keep his Wolf Entertainment production company at Universal Television.

Universal Television has been his studio home base for 36 years, NBC said Thursday.

"Law & Order: SVU," which stars Mariska Hargitay and is in its 21st season, already holds the record for longest-running, live-action prime-time TV series. The other renewed series, "Chicago Fire," "Chicago P.D." and "Chicago Med," are relative kids, ranging from five to eight seasons so far. 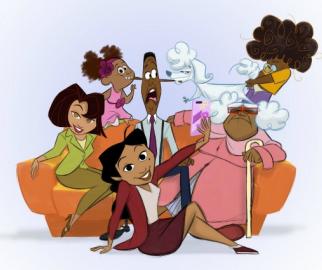 This image released by Disney Plus shows characters from a revival of the new animated series "The Proud Family: Louder and Prouder" The new series will feature original cast members including Kyla Pratt as Penny Proud and Tommy Davidson and Paula Jai Parker as her parents, Oscar and Trudy. (Disney+ via AP)
LOS ANGELES (AP) --

The Proud family is making a comeback.

The Disney Plus streaming service said Thursday it's ordered a revival of the animated series about an African American teenager and her extended family.

The new series, "The Proud Family: Louder and Prouder," will feature original cast members including Kyla Pratt as Penny Proud and Tommy Davidson and Paula Jai Parker as her parents, Oscar and Trudy.

Soleil Moon Frye is returning as Penny's pal Zoey Howzer, and Cedric the Entertainer will reprise the role of Uncle Bobby.

"In our minds, the show never really went away, as we still had tons of stories left to tell. It's the perfect time to bring back this show, and we can't wait to take fans, old and new alike, on this journey with us," executive producers Bruce W. Smith and Ralph Farquhar said in a joint statement.

Production on the series is underway, with a release date yet to be announced.

Episodes of the original 2001 More 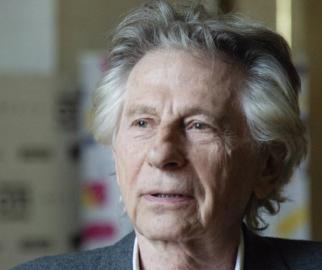 In this May 2, 2018 file photo, director Roman Polanski appears at an international film festival, where he promoted his latest film, "Based on a True Story," in Krakow, Poland. The entire leadership of the Cesar Awards, France's version of the Oscars, stepped down Thursday Feb. 13, 2020, in a spat over both its opaque decision-making process and controversial director Roman Polanski, whose new film, “An Officer and a Spy”, leads this year's nominations. (AP Photo, file)
By Angela Charlton & Oleg Cetinic
PARIS (AP) --

Filmmaker Roman Polanski is skipping the awards ceremony for France's equivalent of the Oscars — where his latest movie leads this year's nominations — because of protests prompted by a new rape accusation against him.

Women's rights activists have called for a boycott of Friday's Cesars ceremony in Paris, and plastered anti-Polanski banners and graffiti at the event venue and the Cesar academy headquarters.

The entire male-dominated leadership of the Cesars stepped down recently amid a spat over its byzantine decision-making structure and over how to deal with the Polanski problem.

In a statement Thursday provided to The Associated Press, the Paris-based Polanski said the ceremony was turning into a "public lynching." Addressing the new accusation against him and other allegations over the years, he said: "Fantasies of unhealthy minds are now treated as proven facts."

"We know ahead of time how this evening will play out," More 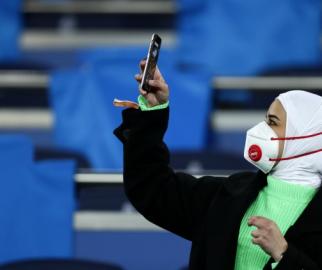 A fan wearing a protective mask takes a picture with her cell phone prior the Champions League, round of 16, first leg soccer match between Real Madrid and Manchester City at the Santiago Bernabeu stadium in Madrid, Spain, Wednesday, Feb. 26, 2020. (AP Photo/Manu Fernandez)
By Barbara Ortutay, Technology Writer
SAN FRANCISCO (AP) --

Facebook said Wednesday that it is banning ads that make false claims about products tied to the new coronavirus.

The social network said it is removing ads that feature a product and imply a limited supply, seeking create a "sense of urgency" in their mention of coronavirus. Ads that guarantee a cure or prevention are also banned, it said.

For instance, ads for face masks that claim the products are 100% guaranteed to prevent the spread of the virus are not allowed, the company said.

The ban went into effect this week. Facebook had previously banned ads, along with regular unpaid posts, that peddle fake cures such as drinking bleach, spread conspiracy theories about the virus, or discourage people from seeking medical treatment. 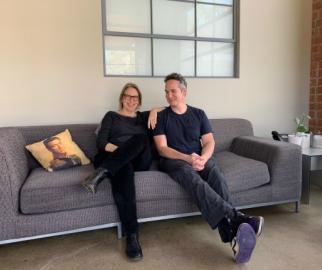 Christjan Jordan, editor of award-winning work for clients including Amazon, GEICO, and Hulu, has partnered with industry veteran Mary Ellen Duggan to launch The Den, an independent boutique editorial house in Los Angeles. The new venture’s roster also includes editor Andrew Ratzlaff, who like Jordan was most recently at Union Editorial.

The Den founders Jordan and Duggan are long-time friends. Duggan’s bicoastal career has included heading production departments at both KPB and Cliff Freeman on the East Coast, and most recently More 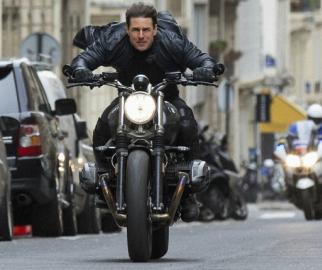 Paramount Pictures on Monday halted production on the seventh "Mission: Impossible" film due to the new virus, as Hollywood began to more drastically adapt to the growing global outbreak.

In a statement, Paramount cited the Venetian government's halting of public gatherings, and said it was canceling the shoot "out of an abundance of caution for the safety and well-being of our cast and crew."

Paramount also on Monday postponed the Chinese release of "Sonic the Hedgehog," which had been set for Friday. Cinemas in China have been shuttered due to the outbreak, closing down the world's second largest box-office More 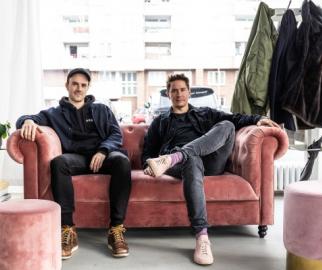 Director Andreas Roth and executive producer Daniel “Rocco” Kopecny have launched AKKURAT Studios, an international creative collective and production company hybrid. With more than a decade of advertising experience, founders and filmmakers Roth and Kopecny will serve, respectively, as creative director and managing director of the new venture. The German business partners will lead the company out of Berlin, with a satellite atelier in Los Angeles.

Plans call for AKKURAT to handle the U.S. for much of its talent More