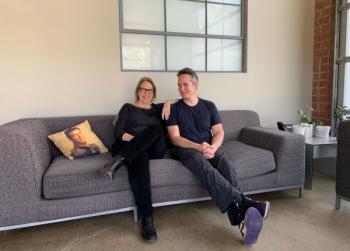 Christjan Jordan, editor of award-winning work for clients including Amazon, GEICO, and Hulu, has partnered with industry veteran Mary Ellen Duggan to launch The Den, an independent boutique editorial house in Los Angeles. The new venture’s roster also includes editor Andrew Ratzlaff, who like Jordan was most recently at Union Editorial.

The Den founders Jordan and Duggan are long-time friends. Duggan’s bicoastal career has included heading production departments at both KPB and Cliff Freeman on the East Coast, and most recently The Big Family Table in Los Angeles. In addition, she has freelanced all over the country and won numerous awards for her productions.

Jordan has worked with Arcade Edit, Cosmo Street, and Rock Paper Scissors, among others. Frequently found editing with his dog Ziggy on his lap, Jordan’s oft-viral work features numerous standouts, including “Alexa Loses Her Voice” for Amazon; “Longest Goal Celebration Ever” for GEICO; and “#notspecialneeds” for World Down Syndrome Day, out of Publicis NY. His accolades span Cannes Lions, AICE, AICP Show, Clio, D&AD, One Show, and Sports Emmy awards.

Ratzlaff has cut many high-profile comedy spots and was drawn to The Den’s ensemble of talent and commitment to support the work. “There’s also something about being included on the ground floor. It becomes about more than just editing--it’s about building a culture, establishing a presence and creating an environment that allows for creativity to flourish,”  said Ratzlaff.

Also joining the team are jr. editor Hannelore Gomes, an up-and-coming artist who had been freelancing, and Rachel Seitel as partner and head of business development. Seitel was earlier at EP at Deutsch.

Duggan noted that The Den plans to add major editing talent to its roster in the coming months.

The Den will be represented by Diane Patrone at The Family on the East Coast, and on the West Coast by Ezra Burke and Shane Harris.