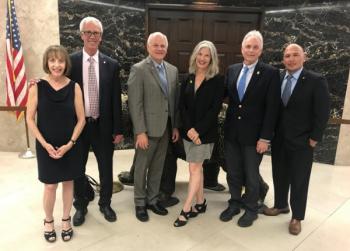 A statement from the CIC and EUC read, “On behalf of the California IATSE Council and the Entertainment Union Coalition, we want to express our appreciation to Senator Scott Wiener for his leadership in guiding SB 271 through the legislative process, to Governor Newsom for signing the bill into law, to our 12 co-authors, and to the members of the California Legislature for their unanimous support.  SB 271 ensures that the working women and men of the entertainment industry will have access to the UI, SDI, and PFL benefits to which they are entitled. We can now protect thousands of our members and their families who depend upon these benefit programs, often in times of great need and economic stress because they are unexpectedly or suddenly out of work, disabled as a result of an injury or illness, or are responsible for the care of family members.”

SB 271 resolves a long-standing problem specific to residents of California who work in the motion picture and television industry on productions that shoot in other states in addition to California. Up until now, outdated metrics implemented in the 1950s were used to determine where their employment taxes would be credited. Often that was to other states. When it came time to claim their benefits, many California entertainment industry workers found their benefits were far lower than they should have been and, in some cases, nonexistent. SB 271 resolves this problem and will bring financial and emotional relief to the thousands of California based entertainment industry workers who need and deserve the benefits to which they are entitled.

The CIC represents over 50,000 members of the International Alliance of Theatrical Stage Employees; women and men working throughout the State of California who make up the backbone of the entertainment industry. They work in all forms of motion picture and television production, live theatre, television broadcasting, sports broadcasting, trade shows, exhibitions, and concerts as well as equipment and construction shops that support all areas of the industry. The CIC, formed to support public policy that supports working families, is comprised of 17 local unions each of which represents one or more craft areas.

The EUC has a combined membership of close to 150,000 members in California. Its members are the California IATSE Council, Laborers Local 724, SAG AFTRA, and Teamsters Local 399. The members of the EUC are joined together in working on behalf of their members interests in Sacramento and before local governments throughout California.