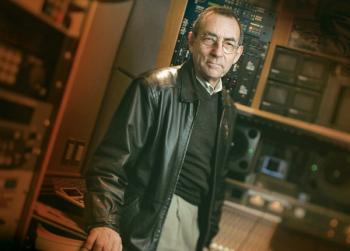 Edward J. Greene, CAS--a multiple award-winning mixer in television production, postproduction and an audio system design consultant--died peacefully in Los Angeles on August 9, with his family by his side. He was 82 years old.

Born and raised in New York City, Green attended Rensselaer Polytechnic Institute.  He began his professional audio career with a summer job in 1954 at Allegro Studios in New York doing voice and piano demos for music publishers. Within two years the studio was doing full recording sessions. Greene joined the army in 1956 and served as recording engineer for the U.S. Army Band and Chorus in Washington, D. C.  Upon discharge from the Army he co-founded Edgewood Studios in Washington, with two partners--radio and television commentator Charles Osgood and composer George Wilkins. Some of Greene’s recordings are legendary and include Charlie Byrd and Stan Getz’s “Jazz Samba” and Ramsey Lewis’ “The In Crowd”.

In 1970, Greene came to California as chief engineer for MGM Records and worked with Sammy Davis Jr., The Osmonds, Lou Rawls and other prominent artists of that time. When many of these artists started doing television programs, Greene was asked to participate.  He was brought into television mixing by Frank Sinatra, at a production meeting for the legendary singer’s first broadcast.

Greene mixed some of the most highly regarded music, variety and award shows as well as earned the well-deserved reputation of being the “go-to” guy when it came to doing live drama for television like ER, Fail Safe, and The West Wing Live. Greene garnered 22 Emmy wins, his most recent in 2015, and an astonishing 61 Emmy nominations (ranking him 3rd for most nominations and 2nd for most wins by an individual). He was a member of the Television Academy when it formed its current incarnation in 1977, and served as Governor of the Sound Peer Group from 2013–2015.

Greene had a special affinity for mixing live broadcasts, often displaying a baffling degree of calm before they went on the air to an audience of millions of people around the world. His live productions included decades of The Kennedy Center Honors, The Grammy Awards, The Tony Awards, The Academy Awards and The SAG Awards. He also mixed the Live from Lincoln Center specials, Carnegie Hall, Live at 100, numerous Macy’s Thanksgiving Day Parades, Tournament of Roses Parade, The AFI Life Achievement Awards, The 52nd Presidential Inaugural Gala, The 1996 Summer Olympics, The 2002 Winter Olympics Opening and Closing Ceremonies and years of American Idol. His live production work garnered him a Cinema Audio Society Award and four additional CAS nominations.

He was an advocate for better sound on both broadcast and the web. He passionately believed that mixers’ and producers’ good work should be delivered intact to the listener, although the exponential growth of program media outlets and systems made consistent delivery of quality sound a growing challenge. Throughout his career, Greene was willing to mentor others and encourage students. In 2004 he participated in the Oral History Project of the Audio Engineering Society. He also taught for many years at the Summer Recording Institute program at the Eastman School of Music, in Rochester, NY.

Greene served on the Board of Directors of the Cinema Audio Society from 2005 to his death. In 2007, he was presented with the highest accolade of the organization, the CAS Career Achievement Award recognizing his career, his willingness to mentor and his contribution to the art of sound.

Greene is survived by his wife of ­­­30 years, Lynne Cruise, and his children, Grant, Sam, Lynda and Larry in Los Angeles, and his brother David in Toronto.

A memorial service will be held at a later date.  The family has requested that in lieu of flowers, friends can donate to their individual charity of choice in the name of Edward J. Greene.