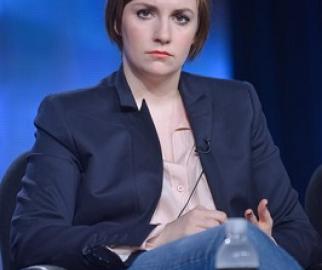 Lena Dunham on stage during the "Girls" panel discussion at the HBO portion of the 2014 Winter Television Critics Association tour at the Langham Hotel on Thursday, Jan. 9, 2014 in Pasadena, Calif. (Photo by Richard Shotwell Invision/AP)
By Lynn Elber, Television Writer
PASADENA, Calif. (AP) --

The nudity that's a part of HBO's "The Girls" has raised eyebrows. A question about it raised the ire of the show's producers.

At a Thursday session with the Television Critics Association to promote the comedy's new season, a reporter asked Lena Dunham, the show's creator, executive producer and star, why her character was so often naked and for no apparent reason.

"It's because it's a realistic expression of what it's like to be alive, I think, and I totally get it," Dunham replied. "If you are not into me, that's your problem, and you are going to have to kind of work that out."

Filmmaker Judd Apatow (the "Anchorman" movies, "The 40-Year-Old Virgin"), who's an executive producer of the show about 20-something friends, jumped in, asking the reporter if he had a girlfriend and suggesting she wouldn't appreciate his question.

At another point in the session, producer Jenni Konner said More

The European Union's antitrust authority has approved the merger of Omnicom and Publicis, clearing a deal that will create the world's largest advertising firm.

The European Commission, the 28-nation bloc's competition watchdog, said Thursday the merger raises no significant antitrust concerns thanks to the presence of other large competitors and the advertising and communication market's bidding nature.

Omnicom Group Inc., based in New York, and France's Publicis Groupe SA have said they are combining in a "merger of equals" that will create the Publicis Omnicom Group, a firm worth more than $35 billion.

The chiefs of Samsung Electronics Co. and Apple Inc. will meet to discuss settling a bitter two year legal battle over designs and technologies of smartphones and tablets.

A filing with the U.S. District court in San Jose showed Thursday that senior legal executives from Apple and Samsung agreed earlier this week that the CEOs will meet by or before Feb. 19.

The agreement was made in response to a court order to submit a proposal for settlement discussions before a new trial begins in March. The March trial involves more recent mobile devices than previous cases.

The same court ordered Apple and Samsung CEOs to meet in 2012 for settlement talks.

Many industry watchers predict the two companies will ultimately settle their patent lawsuits outside court.

Amazon will have exclusive ad-free streaming rights in the U.S. to a CBS thriller this summer starring Halle Berry.

Episodes will be available for free on CBS.com and CBS' app with ads the day after they air on CBS. Members of Amazon's $79-a-year Prime service will be able to watch "Extant" ad-free four days after broadcast. Non-Prime members can buy episodes, but only through Amazon.

The deal represents Amazon.com Inc.'s latest effort to bring more exclusive content to Prime as it battles rivals Netflix Inc. and Hulu Plus. It also blocks Apple Inc.'s iTunes for sales of episodes.

The arrangement mirrors that involving "Under the Dome," a surprise hit for CBS last summer. Both shows are produced by Steven Spielberg's Amblin Television. 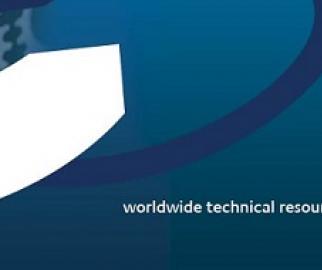 PLASA, an international membership body for those who supply technologies and services to the event, entertainment and installation industries, has implemented strategic and operating plans to guide the organization through the next several years of its development. Key to the new initiative is a revised sr. management structure that will see three executive directors (CEO, CFO, COO), plus six divisional directors--of Membership, International Programs, Sales, Marketing, Events, and Media.

Matthew Griffiths and Shane McGreevy currently fill the positions of CEO and CFO, respectively. The COO post will be recruited in the first part of 2014 and will be based out of PLASA’s New York office. Lori Rubinstein will retain her executive director responsibilities in North America during this transitional period until the new COO is fully in place.

Aereo, a Barry Diller-backed startup that provides broadcast television channels over the Internet for a monthly fee, said Tuesday that it has secured $34 million in additional funding from outside investors.

The money will help Aereo expand beyond the 10 metropolitan areas it currently serves. It will also allow Aereo to develop apps for additional devices, such as Internet-connected TVs and game consoles, while battling copyright-infringement lawsuits filed by broadcasters.

The additional funding, announced on the sidelines of the International CES gadget show in Las Vegas, comes from Aereo's lead outside investor, Diller's IAC/InterActiveCorp, as well as several existing and new investors.

Aereo's service starts at $8 a month and currently covers New York, Boston, Houston and Atlanta, among others. Subscribers get about two dozen local over-the-air stations, plus the Bloomberg TV financial More

Yahoo is leaning more heavily on its recent acquisitions of technology and talent as CEO Marissa Mayer tries to attract more traffic and advertising to the Internet company's services.

Mayer unveiled the latest steps in her effort to accelerate Yahoo's lackluster revenue growth during an hour-long presentation at the International CES, an annual gadget show held in Las Vegas. She shared the spotlight with two technology whiz-kids, Nick D'Aloisio and David Karp, who joined Yahoo Inc. last year in high-profile acquisitions that cost slightly more than $1.1 billion.

At the New York Film Critics Circle Awards on Monday night, White allegedly jeered McQueen as "an embarrassing doorman and garbage man" while he was presented the best director award by Harry Belafonte. McQueen dismissed the outburst, apparently not bothered by it.

In an email Tuesday to "12 Years a Slave" distributor Fox Searchlight, NYFCC chairman Joshua Rothkopf apologized to Fox Searchlight and McQueen for "the crass bit of heckling." In the letter, first posted online by Deadline Hollywood, Rothkopf said he was "mortified" that it came from one of the group's own members and pledged "disciplinary action."

Twitter co-founder Biz Stone thinks a picture can be more meaningful than 140 characters of text.

That's the concept behind a smartphone application released Tuesday by Jelly Industries. Stone launched the San Francisco startup nine months ago without revealing what he was working on.

Jelly's free app for Apple Inc.'s iPhone and phones running Google's Android allows people to tap into the collective knowledge within their networks on Twitter's short-messaging service and Facebook's online hangout to find answers about things that puzzle them. The questions are accompanied with a photo of the object that triggered the curiosity.

Stone played an instrumental role in building Twitter Inc. into one of the Internet's most valuable companies. His exit from Twitter nearly two years ago raised a great deal of intrigue about what his next act would be.