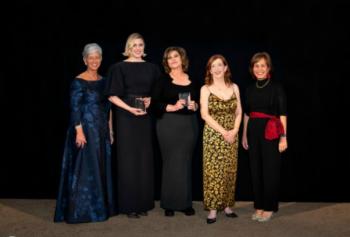 In accepting the award, Gerwig said: “Who I am today would be totally unimaginable without Louisa May Alcott . . . because Little Women is the book of my life. Rereading and rereading this book throughout my childhood made me the woman I am today. Because without Louisa I never would have listened to the voice inside of myself that whispered ‘Write.’”

Producer Amy Pascal, in accepting on behalf of Louisa May Alcott, said “Both Greta and I wish that the actual Louisa May Alcott could be here tonight to accept this award to see how legendary her words are and the women she created are.”

The other finalist films were Dark Waters (distributed by Focus Features), The Irishman (Netflix), Jojo Rabbit (Fox Searchlight), and The Two Popes (Netflix).

In the television category, Phoebe Waller-Bridge earned the award for Fleabag, written for the streaming network Amazon Prime. It is based on her one-woman play of the same name, which debuted at the 2013 Edinburgh Fringe Festival, winning the Fringe First Prize.

The other finalists were the writers behind episodes of Fosse/Verdon (distributed by FX), Killing Eve (BBC America), Unbelievable (Netflix), and Watchmen (HBO).

Earlier in the evening, USC President Carol Folt presented the Literary Achievement Award to author Susan Orlean, a 2003 Scripter Award finalist for her book “The Orchid Thief,” which served as the basis for the film Adaptation. Folt praised Orlean’s most recent publication, “The Library Book,” which recounts the 1986 fire that devastated L.A.’s Central Library.

Orlean dedicated the award to librarians around the world, saying “It’s librarians who do great things every day and they are the patron saints of knowledge, freedom, and learning.”

Quinlan honored Glenn Sonnenberg as the 2020 Ex Libris Award winner for his extraordinary support of the USC Libraries, and for co-founding the Scripter Awards with actress and fellow USC Libraries board member Marjorie Lord in 1988. “It is hardly an accident that college libraries are placed at the center of campus--not at the periphery,” said Sonnenberg. “Nor is it an accident that many libraries--think the Vatican, the Library of Congress, or this room, are edifices of great beauty. People recognize the centrality of their contents and of their role.”