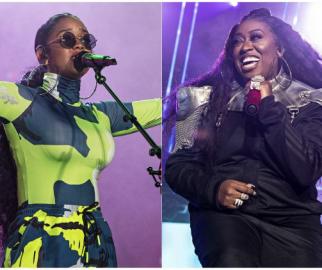 This combination photo shows H.E.R. performing at the 2019 Essence Festival in New Orleans on July 6, 2019, left, and Missy Elliott performing at the 2019 Essence Festival on July 5, 2019. The pair will appear in a new Pepsi commercial that will debut for the Super Bowl. (Photo by Amy Harris/Invision/AP)
By Kelli Kennedy
FORT LAUDERDALE, Fla. (AP) --

Almost three years ago, Missy Elliott sent a tweet to a then under-the-radar artist whose music she admired and told her that "she was going to blow up."

Fast forward to this week and H.E.R. has been nominated for 10 Grammys, won two and is now starring with the rap legend in a new Pepsi commercial that will debut for the Super Bowl.

"When Pepsi reached out and said we want to have you on the Super Bowl commercial and the other person would be H.E.R. I was like, 'Oh my God, this is major'" Elliott said.

Elliott first heard of the "Best Part" singer from a friend who had her debut album on repeat. Elliott thought the record was "hot" and "immediately started Googling her," but couldn't find much information beyond her mixtape.

"It made me fall in love with her music," Elliott told The Associated Press in a recent phone interview. "I didn't get into what she looked like, what she said, what she had on, it was just the lyrics More 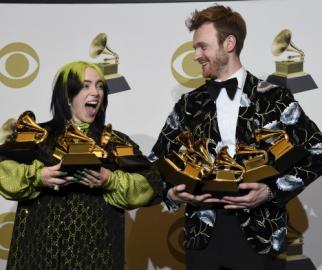 Billie Eilish, left, and Finneas O'Connell pose in the press room with the awards for best album, best engineered album and best pop vocal album for "We All Fall Asleep, Where Do We Go?," best song and record for "Bad Guy," best new artist and best producer, non-classical at the 62nd annual Grammy Awards at the Staples Center on Sunday, Jan. 26, 2020, in Los Angeles. (AP Photo/Chris Pizzello)
By David Bauder, Media Writer
NEW YORK (AP) --

As illustrated in the Nielsen company's ratings for last week, that would be CBS' night of drama on Tuesday and Dick Wolf's trilogy of "Chicago" series Wednesday on NBC.

Even though it has been on the air since 2003, CBS' "NCIS" continues a remarkable streak of popularity. With nearly 11.4 million viewers on the night it aired last Tuesday, it was the only television show aside from the Grammys to pass the 10 million mark last week, at least before delayed viewing is counted in.

Paired with "FBI," it makes for a strong one-two punch of action for CBS on Tuesdays. The newer "FBI: Most Wanted" has some distance to go before reaching that level.

Wolf is a proven television hitmaker, and NBC does very well on Wednesdays with his three dramas that focus on a Chicago hospital, police department and fire department. All More 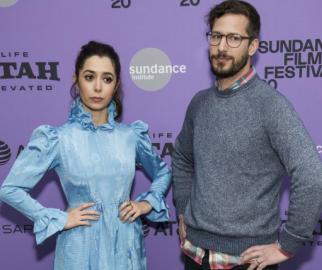 The "Groundhog Day"-esque comedy "Palm Springs," by Andy Samberg and the Lonely Island, has set an acquisition record at the Sundance Film Festival by 69 cents.

The indie distributor Neon and the streaming service Hulu bought "Palm Springs" for exactly $17,500,000.69 in a sale announced Monday evening at the Park City festival. The previous record Sundance sale was the $17.5 million Fox Searchlight paid for Nate Parker's "The Birth of a Nation" in 2016.

In a statement, Samberg and his Lonely Island partners Akiva Schaffer and Jorma Taccone, along with producer Becky Sloviter, joked that the financial terms of the deal were unfavorable.

"We spent over $85 million of our own money on this movie, WE ARE TAKING A BATH on this deal," they said. "We hope Neon and Hulu are happy but we definitely have a lot of explaining to do to our families."

Almodóvar, Banderas triumph with "Pain and Glory" at Goyas 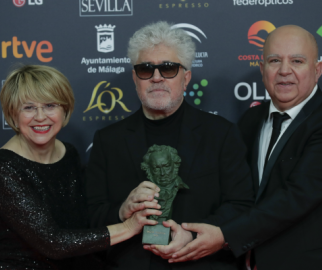 "Pain and Glory" is nominated for an Academy Award in the best international film category. Almodóvar is hoping to claim his third Oscar in two weeks.

The film, which is considered the most personal for the 70-year-old Almodóvar, also won best original screenplay, best original music, best editing and a best supporting actress prize for Julieta Serrano.

"I realized that I was writing about myself and the past (and) I wasn't sure if I should continue and open myself up to such a degree, but I did, and now I am very happy," Almodóvar said at the awards gala held in Málaga on Saturday.

Banderas had been nominated on five previous occasions for a Goya but had never won other than the honorary Goya for his career in 2015. 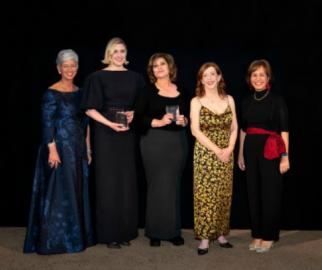 In the film category, the winners were 19th-century author Louisa May Alcott and screenwriter Greta Gerwig, who adapted Alcott’s novel “Little Women” for More 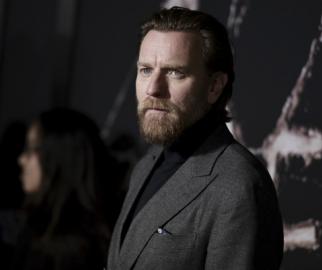 In this Oct. 29, 2019 file photo, Ewan McGregor attends the LA premiere of "Doctor Sleep" at the Regency Theatre Westwood in Los Angeles. McGregor says any delay in completing work on in his new Obi-Wan Kenobi “Star Wars” series will be brief and is aimed at making the show better. McGregor addressed trade reports that the Disney Plus series had been placed on hold at an event Thursday, Jan. 23, 2020, promoting his latest film “Birds of Prey.” (Photo by Richard Shotwell/Invision/AP, File)
By Amanda Lee Myers
LOS ANGELES (AP) --

"The scripts are excellent and they just want them to be better, and so we just pushed More 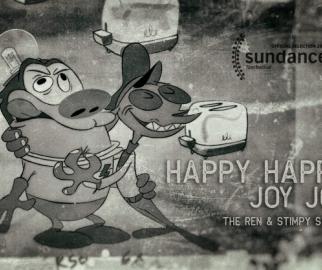 Though it’s been barely a year since veteran executive producer Ron Cicero launched INVADER, the company has seen its directors make a couple of high profile industry marks--a documentary set to make its world premiere at the Sundance Film Festival, and a DGA Award nomination in the Variety/Talk/News/Sports--Specials category.

On the former score, the feature documentary Happy Happy Joy Joy--The Ren & Stimpy Story was selected for Sundance’s Documentary Premieres lineup. Written and co-directed by Cicero and Kimo Easterwood, the film explores the rise and fall of the groundbreaking animated series Ren & Stimpy and its controversial creator, John Kricfalusi, through archival footage, show artwork and interviews with the artists, actors and executives behind the show. (Cicero and Easterwood direct commercials via INVADER as a duo under the LGI Collective moniker.)

As for the DGA Award nomination, that honor was bestowed upon More 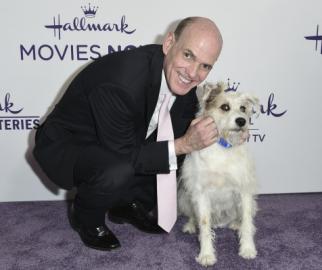 This July 26, 2018 file photo shows Bill Abbott, left, with a dog named Happy at Hallmark's Evening Gala during the TCA Summer Press Tour in Beverly Hills, Calif. The head of Hallmark's media business is leaving the company after 11 years. No reason was given for Bill Abbott's departure as CEO of Crown Media Family Networks, and no replacement was immediately named. (Photo by Richard Shotwell/Invision/AP, File)
NEW YORK (AP) --

The head of Hallmark's media business is leaving the company after 11 years, just a month after its flagship Hallmark Channel faced an outcry over a decision to pull an ad with a lesbian couple kissing.

No reason was given for Bill Abbott's departure, and no replacement was immediately named.

In a statement, Mike Perry, president and CEO of Hallmark Cards Inc., said that with immense competition from TV networks and streaming services, it is important for the company to find "relevant new ways to grow our business."

In December, the Hallmark Channel's decision to pull an ad featuring the same-sex couple  led to an outcry online. The company later reversed the decision. 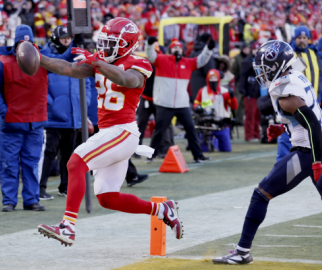 That was the simple lesson for the NFL this week, after a dip in viewership for its conference championship games, compared to 2019. The Nielsen company said 42.8 million people watched the San Francisco 49ers beat the Green Bay Packers to punch their Super Bowl ticket, and 41.1 million people watched Kansas City beat Tennessee.

Both conference championship games went into overtime last year, and the audiences were 44.2 million and 53.9 million, Nielsen said. By contrast, this year's games were one-sided.

LSU's win over Clemson in the college football national championship game was seen by 25.6 million on ESPN, Nielsen said. That's a little over a million more than last year's game reached. 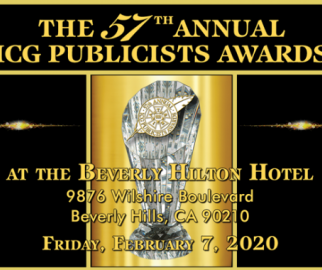 The International Cinematographers Guild Publicists (ICG, IATSE Local 600) will honor veteran publicist Sheryl Main with the esteemed Henri Bollinger Award at the 57th Annual ICG Publicists Awards Luncheon on February 7 at The Beverly Hilton Hotel. Main is a publicity and marketing strategist with over 25 years’ experience in both the entertainment and political arenas. More than 800 industry leaders are expected to attend this year’s luncheon, which traditionally occurs the week leading up to the Academy Awards®.

The Henri Bollinger Award is named after the renowned award-winning entertainment industry publicist. It is bestowed on occasion to recognize a person who epitomizes the definition of special merit in the field of entertainment. The ICG Publicists Awards celebrate excellence in publicity and promotion for motion pictures and television programs.