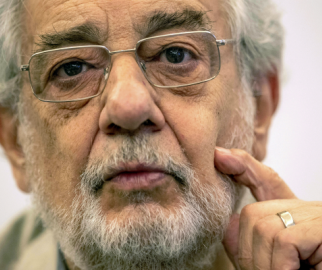 The 79-year-old Domingo said in a post on his personal Facebook account Sunday that "I feel it is my moral duty to announce to you that I have tested positive."

The tenor says he and his family are in self-isolation and that he is feeling well despite having fever and a cough.

"I beg everyone to be extremely careful, follow the basic guidelines by washing your hands frequently, keeping at least a 6 foot distance from others, doing everything you can to stop the virus from spreading and please above all stay home if you can!" he said.

Domingo, one of the world's top opera stars, has recently been accused by several women of sexual misconduct. That has led to several of his performances being canceled and an apology from him.

Spain is the third hardest-hit country after China and Italy with 28,572 infections and 1,720 deaths in More

Quick flip as “Onward” goes from movie theaters to homes 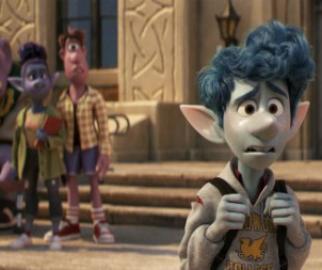 In this image released by Disney/Pixar, Ian Lightfoot, voiced by Tom Holland, foreground, appears in a scene from "Onward." (Disney/Pixar via AP)
LOS ANGELES (AP) --

Pixar’s “Onward” will go from the top movie at the box office straight to digital release, as Hollywood continued to shuffle its recent releases from theaters into the home due to the coronavirus pandemic.

The Walt Disney Co. said Friday that “Onward” will be available for purchase on digital platforms for $19.99 beginning Friday at 8 p.m. Eastern. It will land on the studio’s streaming platform, Disney Plus, on April 3.

“Onward” had been the top movie at the domestic box office the last two weekends. But the wide majority of cinemas have closed in recent days to help limit large gatherings as the virus spreads. Other recently released films have also moved to on-demand or other home-viewing platforms, including Sony Pictures’ “Bloodshot” and Universal Pictures releases “The Hunt,” “Emma” and “The Invisible Man.” 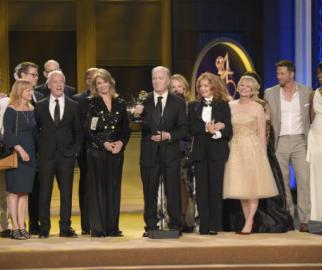 Ken Corday and the cast and crew of "Days of Our Lives" accept the award for outstanding drama series at the 45th annual Daytime Emmy Awards at the Pasadena Civic Center on Sunday, April 29, 2018, in Pasadena, Calif. (AP photo)
PASADENA, Calif. (AP) --

The coronavirus pandemic has started to affect events in the summer, with the Daytime Emmy Awards announcing Thursday that they were canceling their June ceremony.

“There are just too many unknowns right now, not the least of which is whether we would actually be permitted to stage an event in June” involving more than 1,000 participants, National Academy of Television Arts & Sciences chairman Terry O’Reilly wrote in a letter to members.

The Daytime Emmy Awards had been scheduled for June 12-14 in Pasadena. 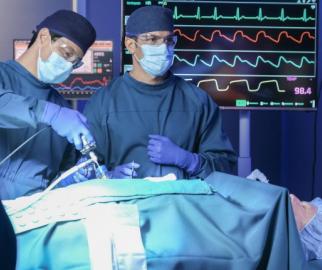 This image released by ABC shows a scene from "The Good Doctor." They may only play doctors on TV, but they're giving real-life help to hospitals that have taken a hit from the coronavirus outbreak. The Fox medical series “The Resident” has donated some of its on-set masks and gowns to a hospital in Atlanta, where it shoots, and the ABC show “The Good Doctor” is moving to do the same in its home base of Vancouver, Canada. (Liane Hentscher/ABC via AP)
ATLANTA (AP) --

They may only play doctors on TV, but they're giving real-life help to hospitals that have taken a hit from the coronavirus outbreak.

The Fox TV medical series “The Resident” has donated some of its on-set masks and gowns to a hospital in Atlanta, where it shoots, and the ABC show “The Good Doctor” is moving to do the same in its home base of Vancouver, Canada.

“To the entire team @theresidentonfox, thank you for this incredibly generous donation of #PPE from your set, including gowns, masks, gloves, and all the things our healthcare workers need to provide safe care for our community during #COVID19,” Dr. Karen Law of Grady Memorial Hospital said on Instagram, along with a photo of boxes of the donated gear.

Show representatives confirmed that the gear came from them, and representatives of “The Good Doctor” said they were in talks with government officials in Vancouver about what is needed at hospitals there. 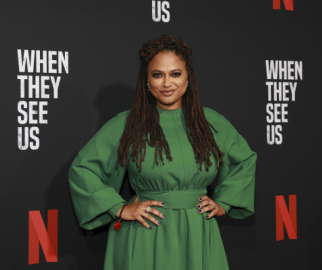 This Aug. 11, 2019 file photo shows director Ava Duvernay at the "When They See Us" FYC screening at Paramount studios in Los Angeles. The former Manhattan prosecutor Linda Fairstein has filed a lawsuit against Netflix and DuVernay over her portrayal in "When They See Us," a series about the Central Park Five case. (Photo by Mark Von Holden/Invision/AP, File)
NEW YORK (AP) --

Former Manhattan prosecutor Linda Fairstein has sued Netflix and film director Ava DuVernay over her portrayal in the streaming service's miniseries about the Central Park Five case, which sent five black and Latino teenagers to prison for a crime they were later absolved of committing.

Fairstein claims in the lawsuit, filed Wednesday in federal court in Fort Myers, Florida, that the four-part series "When They See Us" defamed her by portraying her as a "racist, unethical villain."

"Most glaringly, the film series falsely portrays Ms. Fairstein as in charge of the investigation and prosecution of the case against the five, including the development of the prosecution's theory of the case," Fairstein's lawyer, Andrew Miltenberg, said in a statement. "In truth, and as detailed in the lawsuit, Ms. Fairstein was responsible for neither aspect of the case."

Conan O'Brien to return to air, with an iPhone from home 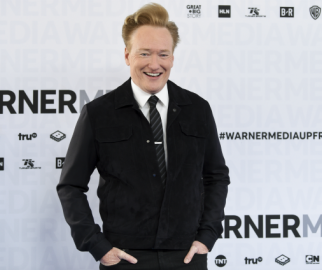 In this May 15, 2019 file photo shows late night talk show host Conan O'Brien at the WarnerMedia Upfront in New York. O'Brien said he will resume putting out new episodes of TBS' “Conan” on March 30. His staff will remain at home, and the show will be cobbled together with O'Brien on an iPhone and guests via Skype. (Photo by Evan Agostini/Invision/AP, File)
NEW YORK (AP) --

With iPhones and Skype, Conan O'Brien is going back on the air.

The late-night host said he will resume putting out new episodes of TBS' "Conan" on March 30. His staff will remain at home, and the show will be cobbled together with O'Brien on an iPhone and guests via Skype.

"This will not be pretty, but feel free to laugh at our attempt," said O'Brien on Twitter.

The late-night shows have all shut down production due to the coronavirus pandemic to avoid congregating live audiences and large TV crews. Some hosts have pumped out web videos.

Jimmy Fallon has produced 10-minute "At Home" shows for NBC's "Tonight." In one episode, he did a video chat with Lin-Manuel Miranda. Jimmy Kimmel and David Spade have given monologues from their homes. On Monday, Stephen Colbert delivered a 10-minute monologue from his bathtub in a segment that was added to an episode that was otherwise a rerun of CBS's "The Late Show." 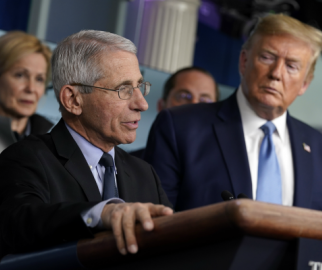 First lady Melania Trump and Dr. Anthony Fauci will take part in public service messages aimed at informing Americans about how to protect themselves and others from the coronavirus.

The White House said Wednesday it's joining with major media companies, digital platforms and the Ad Council to share "accurate and timely information directly to the American people" about social distancing, hygiene and mental health.

The announcements, known as PSAs, will direct people to coronavirus.gov, which a centralized source of updated information on the crisis, according to a White House statement.

Media outlets are donating air time, with all content coordinated through the Centers for Disease Control and Prevention and the Department of Health and Human Services. 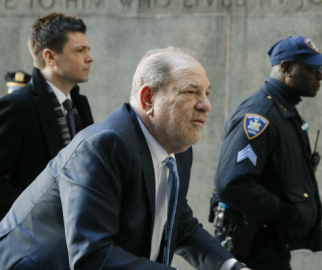 Harvey Weinstein was transferred to a state prison in New York on Wednesday as he begins to serve a 23-year sentence for rape and sexual assault in his landmark #MeToo case.

The disgraced film mogul, who turned 68 on Wednesday, is locked up at the maximum security Wende Correctional Facility near Buffalo, according to state prison officials. He is known behind bars as inmate No. 20B0584.

The prison, six hours by car from Manhattan, is likely just a temporary stop for Weinstein. While he's there, he'll be evaluated to determine which state prison facility meets his security, medical, mental health and other needs.

Weinstein left court in an ambulance after the guilty verdict and detoured to Bellevue Hospital, More

Movie theaters request bailout from Congress due to virus 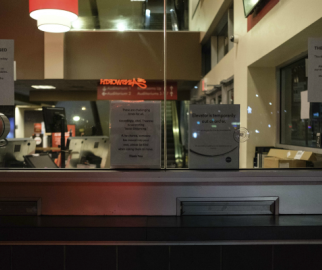 Faced with a lengthy shutdown due the coronavirus pandemic, movie theaters are requesting relief from the U.S. government.

The National Organization of Theater Owners, the trade group that represents most of the industry's cinemas, said Wednesday that it's asking for immediate federal help for its chains and its 150,000 employees. The theaters are requesting loan guarantees for exhibitors, tax benefits for employees and funds to compensate for lost ticket sales and concessions.

NATO said the movie theater industry is "uniquely vulnerable" to the crisis, and needs assistance to weather a near total shutdown of two to three months.

"This is an unprecedented challenge to the business," said John Fithian, president and chief executive of NATO. "We're looking to Congress and White House to understand this is a cultural institution where people gather." 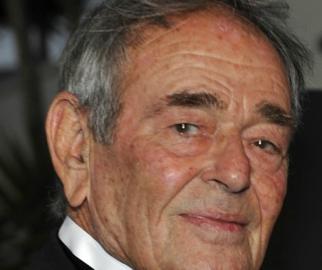 Stuart Whitman, a prolific lead and character actor who appeared in hundreds of film and television productions and received an Oscar nomination as a pedophile in the 1961 drama "The Mark," has died.

Dark-haired and rugged, with enough of a resemblance to Clark Gable that he was sometimes compared to the "Gone With the Wind" star, Whitman was a steady presence in Westerns, war movies and other action films. His credits included "The Longest Day," "Those Magnificent Men In Their Flying Machines," "The Sound and the Fury" and "Ten North Frederick." On television, he starred in the brief-lived series "Cimarron Strip" and also worked on "Murder, She Wrote," "The Streets of San Francisco" and "The F.B.I."

His greatest acclaim came for "The Mark," although he was not the original choice for his role: Richard Burton dropped out More