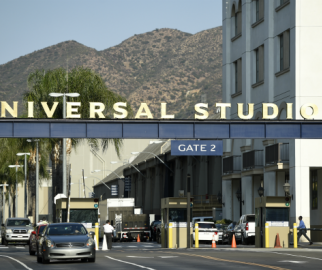 In this Aug. 23, 2016 file photo, the entrance to the Universal Studios lot is pictured in Universal City, Calif. A film built around the premise of liberal “elites” hunting people for sport in red states is coming to theaters in March, and the studio behind it is leaning into controversy about its premise. Universal Pictures on Tuesday, Feb. 11, 2020, unveiled a trailer announcing “The Hunt” will be released March 13, roughly six months after it was supposed to have been released. (Photo by Chris Pizzello/Invision/AP, File)
LOS ANGELES (AP) --

Universal Pictures said Tuesday that it will release the social satire "The Hunt," a film it canceled in the wake of criticism about its premise of "elites" hunting people for sport in red states.

A trailer announcing the film's March 13  release date presents the "elites" hunting regular people as a conspiracy theory. Star Hilary Swank says at one point that "it wasn't real" amid images of shootings, explosions and other violence.

The trailer includes the line, "The most talked about movie of the year is one nobody's seen yet."

In August, Universal Pictures canceled a September release for "The Hunt" after criticism, including from President Donald Trump. The president, without mentioning the film by name, said it was intended "to inflame and cause chaos."

The cancellation came after the studio had already paused the ad campaign for the R-rated film in the wake of mass shootings in Texas, Ohio and California. 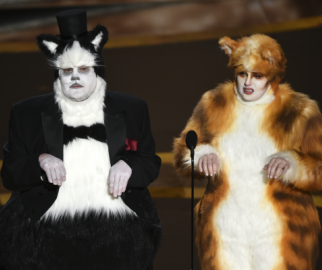 It was inevitable that somebody on Oscars night would make fun of Cats, a critically panned movie which performed dismally at the box office. Decked out in full Cats costumes, James Corden and Rebel Wilson did just that in presenting the Academy Award for Outstanding Visual Effects. But their attempted humor cited the visual effects as contributing to Cats failure, eliciting pushback from the Visual Effects Society (VES).

On stage, Wilson said, "As cast members of the motion picture Cats, nobody more than us understands the importance of...”

“The Visual Effects Society is focused on recognizing, advancing and honoring visual effects as an art form--and ensuring that the men and women working in VFX are properly valued. 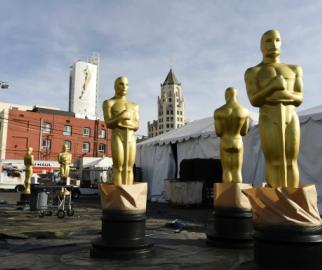 The Nielsen company says that's down from the 29.6 million people who watched the show last year. The previous low for the Oscars came in 2018, when 26.5 million people watched.

The Oscars moved up its telecast a couple of weeks earlier than it has usually been, but that clearly didn't entice viewers.

Up until the last few years, Academy Awards viewership has generally stood between 35 and 45 million people, according to Nielsen.

Academy Museum of Motion Pictures to open on Dec. 14th 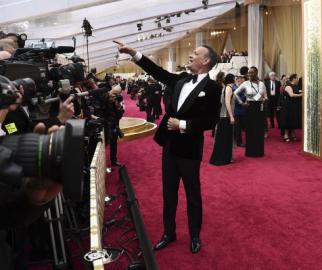 Tom Hanks arrives at the Oscars on Sunday, Feb. 9, 2020, at the Dolby Theatre in Los Angeles. He would later announce during the awards ceremony that the Academy Museum of Motion Pictures will open to the public on Dec. 14, 2020. (Photo by Jordan Strauss/Invision/AP)
LOS ANGELES --

During tonight’s (2/9) 92nd Academy Awards® ceremony, Tom Hanks announced to the audience in the Dolby Theatre in Los Angeles and to millions of broadcast viewers around the world, that the Academy Museum of Motion Pictures will open to the public on Monday, December 14, 2020.

Hanks made the announcement in his capacity as museum trustee and co-chair of the Academy Museum campaign, along with co-chair Annette Bening and chair Bob Iger.

Academy Museum director Bill Kramer said, “We cannot wait to welcome the whole world to the Academy Museum. When our doors open on December 14, our thrilling combination of exhibitions, screenings, and public and educational programs will create unparalleled experiences for movie lovers everywhere.”

Academy CEO Dawn Hudson said, “The dream of this museum will finally become a reality — a gathering place for filmmakers and movie fans from around the world, where we can share the Oscars legacy and More 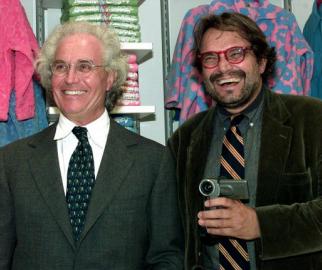 Luciano Benetton, left, and photographer Oliviero Toscani are shown in this Sept. 29, 1998 file photo. Oliviero Toscani made a career out of provocative photographs for Benetton, the Italian makers of colorful knitwear. But that decades-long relationship was severed this week after Toscani made a remark that outraged the family members of victims in the deadly 2018 Genoa bridge collapse. (AP Photo/Luca Bruno/FILES)
By Colleen Barry
MILAN (AP) --

Photographer Oliviero Toscani made a career out of provocative advertising campaigns for Benetton, the Italian clothing brand famed for its colorful knitwear. But that decades-long relationship has been severed after Toscani outraged relatives of victims in the deadly 2018 Genoa bridge collapse.

Toscani told RAI television this week, ''who cares about a bridge collapse?" He was responding to a public flap over a photograph of founding members of the Sardines political protest movement alongside key members of the Benetton family, which controls the company that maintained the bridge.

The president of the committee to remember the 43 people who died Aug. 14, 2018 in the Morandi Bridge collapse called the remarks "inopportune and confused."

''It could be that (Toscani) travels by helicopter, and using a bridge is for commoners,'' Egle Possetti said. ''Unfortunately, many Italians travel over bridges every day, and unfortunately some More

Actor-comedian Orson Bean, 91, hit and killed by car in LA 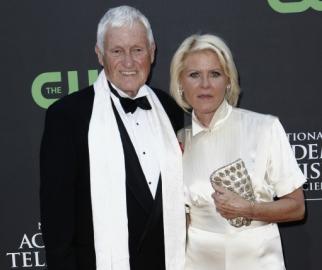 In this file photo dated Sunday Aug. 30, 2009, actor and comedian Orson Bean and Alley Mills arrive at the Daytime Emmy Awards in Los Angeles, USA. According to a statement from the Police in Los Angeles Saturday Feb. 8, 2020, Orson Bean was hit and killed by a car in Los Angeles. Bean was 91. (AP Photo/Matt Sayles, FILE)
LOS ANGELES (AP) --

Orson Bean, the witty actor and comedian, was hit and killed by a car in Los Angeles, authorities said. He was 91.

The Los Angeles County coroner's office confirmed Bean's Friday night death, saying it was being investigated as a "traffic-related" fatality. The coroner's office provided the location where Bean was found, which matched reports from local news outlets.

A man was walking in the Venice neighborhood when he was clipped by a vehicle and fell, Los Angeles Police Department Capt. Brian Wendling initially told local stations. A second driver then struck him in what police say was the fatal collision. Both drivers remained on the scene. Police were investigating and didn't identify the pedestrian to local outlets, which named Bean based on eyewitness accounts.

Bean enlivened such TV game shows as "To Tell the Truth" and played a crotchety merchant on "Dr. Quinn, Medicine Woman."

He appeared in a number of films — More 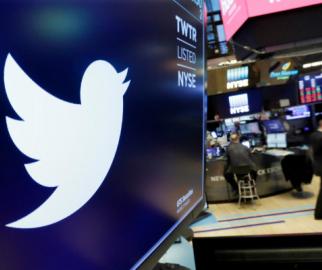 In this Feb. 8, 2018, file photo, the logo for Twitter is displayed above a trading post on the floor of the New York Stock Exchange. Twitter reports earnings Thursday, Oct. 25. Twitter reported Thursday, Feb. 6, 2020 that its fourth-quarter net earnings fell to $119 million from $255 million in the same period a year earlier but the number of daily users rose. (AP Photo/Richard Drew, File)
NEW YORK (AP) --

The San Francisco-based tech company said that fourth-quarter net income  fell 53% to $119 million, or 15 cents per share. That's down from $255 million, or 33 cents, in the same period a year earlier.

Twitter had revenue of $1.01 billion during the quarter, a 11% increase and the first time revenue surpassed $1 billion.

Chief Financial Officer Ned Segal called it a "new milestone" for revenue. He said performance was solid in most of the world, with particularly strong advertising revenue in the U.S.

The company averaged 152 million daily users during the last three months of the year, up from 145 million during the previous quarter.

While the net income figure was below analyst forecasts for $231 million, other figures cheered investors, sending More

In this Aug. 8, 2017, file photo, The Walt Disney Co. logo appears on a screen above the floor of the New York Stock Exchange. The Walt Disney Co. said Tuesday, Feb. 4, 2020, that profit fell 23% in its latest quarter to $2.13 billion as it absorbed losses, and a big revenue boost, from its new streaming service, Disney Plus. (AP Photo/Richard Drew, File)
By Tali Arbel, Technology Writer
NEW YORK (AP) --

Disney said its Disney Plus streaming service reached nearly 29 million paid subscribers in less than three months, an impressive start for what the company has positioned as its future as more people drop cable subscriptions.

But as expected, starting up a new service comes with huge expenses, contributing to a 23% profit decline for the company in the latest quarter.

Disney Plus launched in November to compete with online video services like Netflix. Disney had 26.5 million Disney Plus subscribers as of Dec. 28, the end of its fiscal first quarter. That grew to 28.6 million as of Monday, well on the way to Disney's target of 60 million to 90 million worldwide by 2024.

Original series on Disney Plus include the "Star Wars" series "The Mandalorian." One of the hit characters from the show resembles a baby version of Yoda. Disney CEO Bob Iger told analysts Tuesday that "Baby Yoda" consumer products will go on sale in the coming More 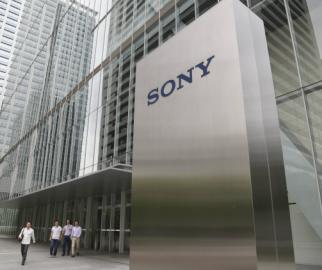 Japanese electronics and entertainment company Sony Corp. warned Tuesday that forecasts and results were at risk because of the new virus in China, as it reported a drop in fiscal third quarter on stumbling video game, networking and film businesses.

Tokyo-based Sony, which makes PlayStation video-game consoles, Bravia TVs and Spider-Man films, said the impact of the virus was unclear, but production and sales of its image sensor division were at risk. The company promised to release any new forecasts as soon as possible.

The new coronavirus has caused more than 400 deaths in China, and confirmed cases have climbed to more than 20,000, mostly in China, since the outbreak started late last year.

Sony reported an October- December profit of 229.5 billion yen ($2.1 billion), down from 429 billion yen a year earlier. Quarterly sales rose 3% to 2.46 trillion yen ($22.6 billion). Both quarterly profit and sales were better than the More 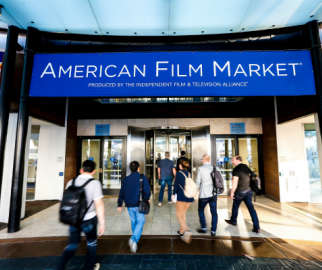 The American Film Market (AFM) has adopted a new six-day schedule beginning with its 2020 edition set to run Tuesday, November 3–Sunday, November 8, in Santa Monica. The announcement was made by the Independent Film & Television Alliance (IFTA).  This marks a major moment in the AFM’s 40 years as it pivots to a shorter timeline in recognition of the changing needs of the global film industry.

Shifting to a Tuesday launch and condensing from its traditional eight-day run is emblematic of AFM’s commitment to provide the most efficient and productive business environment. This move also supports a broader marketplace shift that has companies commencing sales early with deals started at film markets often finalized after the event concludes.

“While the film industry has changed drastically since we first launched AFM, markets are essential as this remains a face-to-face business,” said Michael Ryan, IFTA chairperson and partner, GFM More