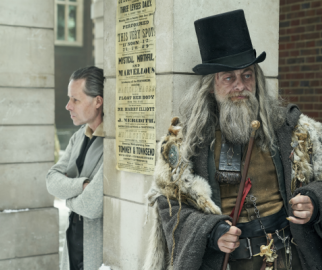 This undated photograph provided by FX Networks shows actors Guy Pearce as Ebenezer Scrooge, left, and Andy Serkis in character as the Spirit of Christmas Past in the movie ‘A Christmas Carol.’ Actor Andy Serkis says the FX Original version of the classic Dickens tale is plugged into the modern zeitgeist. Serkis plays the ghost of Christmas Past and Guy Pearce plays a tormented Scrooge. (Robert Viglasky/FX Networks via AP)
By Hilary Fox
LONDON (AP) --

Wearing a tall black hat, a heavy mottled fur coat covered in trinkets, a long beard and plenty of hair, Andy Serkis received a round of applause from the crew of "A Christmas Carol'' after thanking them for their hard work on the set.

An hour later, he emerged clean shaven and delighted to be "derigged" from his garb as the Spirit of Christmas Past — a pagan-inspired look he describes as "total sensory deprivation."

"I don't think I've ever worn such an uncomfortable costume,'' said Serkis. "The costume's really heavy. I've got an eye which is kind of a milky eye which I have no peripheral vision out of the right-hand side of my face. I've got long fingernails."

It didn't help that this festive offering was shot during a heat wave in July.

Even the colder night shoots were no relief. "I thought, I've got the best costume, I don't need a warm set coat. But then it started raining and I realized when my costume started getting More

Andrew Lloyd Webber beams as "Cats" film has its premiere 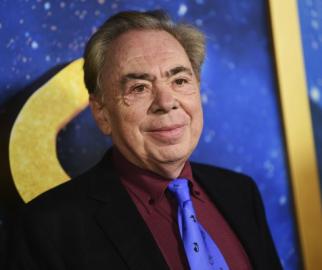 It was a special night for Sir Andrew Lloyd Webber as he walked the red carpet for the world premiere of the film adaptation of his Tony Award-winning stage musical "Cats" Monday night.

Speaking exclusively to The Associated Press, the 71-year old composer called Taylor Swift "absolutely fantastic" as Bombalurina, and beamed with pride while speaking of the unusual journey his award-winning musical has taken.

"This is a most extraordinary night for me in way, because it's been nearly 40 years after it got on the stage first. And of course, when 'Cats' got onto stage, everybody thought it was the most unlikely event to really go into a theater," Lloyd Webber said.

The award-winning composer knew the idea of transforming a series of T.S. Eliot poems into a stage musical with actors playing the feline roles seemed like an unlikely concept for a show. But something clicked for the famed composer, and the musical has become one of his More 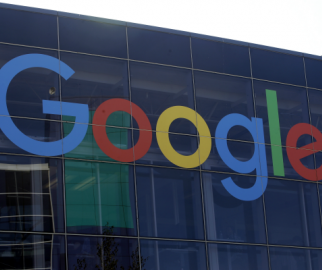 In this Sept. 24, 2019, file photo a sign is shown on a Google building at their campus in Mountain View, Calif. Google plans offer checking accounts run by Citigroup and a credit union, according to a report by The Wall Street Journal. (AP Photo/Jeff Chiu, File)
LONDON (AP) --

The Competition and Markets Authority said it had notified the two companies on Monday that it was opening an initial inquiry and would decide on Feb. 13 whether to escalate it to a more in-depth investigation.

The authority said this month it was looking into whether the $2.6 billion acquisition would result in less competition in the U.K. market.

Google said in a statement that "the acquisition of Looker has received regulatory approval in the U.S. and Austria and we continue to make progress with regulators in the U.K."

The U.S. tech giant said in June it was buying Looker, which helps customers visualize data, as it seeks to compete with rivals including Amazon in the lucrative cloud service business. 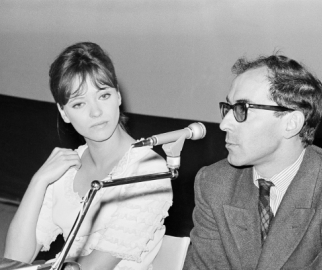 In this Aug. 31, 1965, file photo, French movie director Jean Luc Godard (r) and French actress Anna Karina are shown at the International Film Festival in Venice. Karina, the French New Wave actress who became an icon of the cinema in the 1960s and was the muse of Godard, has died aged 79, the French culture minister announced Sunday Dec. 15, 2019. (AP Photo/Mario Torrisi, File)
PARIS (AP) --

Anna Karina, the French New Wave actress who became an icon of the cinema in the 1960s and was the muse of Jean-Luc Godard, has died. She was 79.

The French culture minister announced her death on Twitter on Sunday. French media said that the Danish-born Karina had cancer and died Saturday.

''Her look was the look of the New Wave. It will remain so forever,'' Culture Minister Franck Riester tweeted.

"Anna Karina radiated. She magnetized the entire world,"' Riester said, adding that ''French cinema has lost one of its legends.''

Karina made seven films with Godard, her partner at the time, including the 1961 "Une Femme Est Une Femme'' (A Woman is a Woman), in which she played a femme fatale. For that, she received the best actress award at the Berlin Film Festival. Other cult Godard movies starring Karina included the 1962 "Vivre Sa Vie'" (Live Your Life) and the 1965 "Pierrot Le Fou." 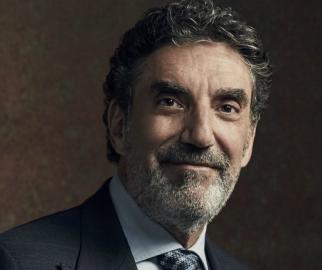 Chuck Lorre, award winning producer, writer and director whose television shows have consistently reflected the highest quality of production design, will receive the Cinematic Imagery Award from the Art Directors Guild (ADG, IATSE, Local 800) at the 24th Annual Art Directors Guild’s Excellence in Production Design Awards. The 2020 ADG Awards will be held Saturday, February 1, 2020 at the InterContinental Los Angeles Downtown and will honor the spectrum of Lorre’s extraordinary work over the past 20 years.

“Chuck Lorre is one of television’s most prolific and successful writers/directors/producers,” said Nelson Coates, ADG president. “His impact on the television comedy landscape has been tremendous, with shows such as The Big Bang Theory, Two and a Half Men, Mom, and most recently, The Kominsky Method. Chuck’s storytelling prowess as a showrunner is amplified by the significance he places on production design in the creation More

YouTube cracks down on racist, sexist and similar insults 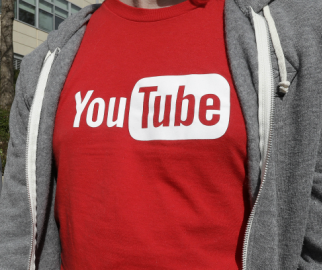 This April 4, 2018, file photo shows a YouTube logo on a t-shirt worn by a person near a YouTube office building in San Bruno, Calif. YouTube is taking another step to curb hateful and violent speech on its site. The video streaming company said it will now take down videos that lob insults at people based on race, gender expression or sexual orientation. (AP Photo/Jeff Chiu, File)
By Rachel Lerman, Technology Writer
SAN FRANCISCO (AP) --

YouTube is taking another step to curb hateful and violent speech on its site.

The video streaming company said it will now take down videos that lob insults at people based on race, gender expression, sexual orientation or other "protected attributes." The Google-owned company will also prohibit veiled threats of violence, taking a step further into moderating what people can say on the videos they create and upload.

YouTube has been slapped with criticism from politicians, viewers and video creators for the material it allows on — and bans from — the site. The site has been accused of allowing and fostering hate speech and extremism and creating spaces for harassment to linger online, along with other digital sites that allow people to upload their own material, such as Facebook and Twitter.

YouTube has been reviewing its policies and guidelines for about two years, Matt Halprin, the company's vice president of trust and safety More 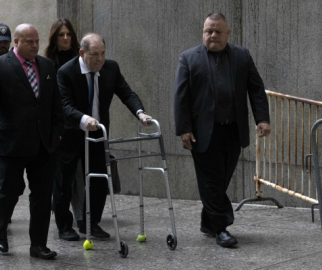 Harvey Weinstein's bail was increased from $1 million to $5 million on Wednesday over allegations he violated bail conditions by mishandling his electronic ankle monitor.

But Judge James Burke rejected prosecution calls to put the disgraced movie mogul in jail over the alleged violation.

Weinstein, 67, arrived at court in the morning using a walker, and his lawyer said he will be undergoing back surgery on Thursday. In his last court appearance, he hobbled into court and looked more pained than usual.

On Wednesday, Burke warned that he would revoke his bail and issue a warrant for his arrest if other issues crop up.

"If you have any further medical issues, the court will not be terribly understanding," Burke said.

Weinstein was calm and respectful during the hearing and indicated that the surgery would help ensure his appearance at his trial. The disgraced movie mogul is scheduled to stand trial in New York City More 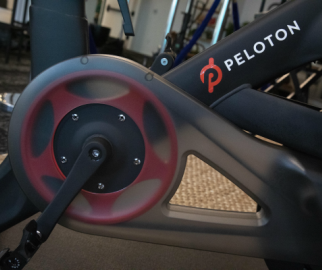 Shares of exercise bike company Peloton were under pressure Tuesday from a scathing research report that comes on the heels of blowback from its widely mocked ad.

He put a price target of $5 on the stock Tuesday. That would be an 86% drop from where it stood at the close of trading Monday. Peloton went public in September at $29 a share.

The shares took a hit last week after Peloton aired an ad in which a husband gifts one of its internet-connected stationary bikes to his wife for the holidays. Critics called the ad sexist and tone deaf.

Netflix says more than 26M watched "The Irishman" in 7 days 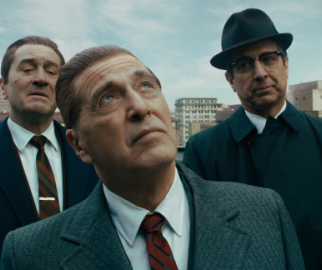 This image released by Netflix shows, from left, Robert De Niro, Al Pacino and Ray Romano in a scene from "The Irishman." (Netflix via AP)
By Jake Coyle, Film Writer
NEW YORK (AP) --

Netflix says that 26.4 million households worldwide watched "The Irishman" in its first week of streaming.

That figure includes those who watched at least 70% of Martin Scorsese's 3 1/2 hour crime epic. Netflix selectively announces viewership for its films and series, and they aren't substantiated by third-party data firms.

Nielsen last week estimated that "The Irishman" had an average viewership of 13.2 million in its first five days in the U.S. About one in five viewers watched the film in its entirety over its first day of streaming on Nov. 27, Nielsen said.

If Netflix's figures are accurate, that would make "The Irishman" one of this year's most widely watched Oscar contenders. The film, made for about $160 million, played exclusively in theaters for about three weeks, but the largest chains refuse to play movies that don't adhere to a traditional theatrical window. Netflix has declined to disclose box-office receipts.

More
AMP Awards set for May 2020, will return to NY’s Sony Hall 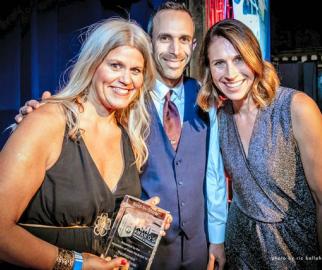 The AMP Awards for Music & Sound has announced its date and venue for the 2020 gala awards presentation, honoring excellence in music and sound for brands in all media. Sponsored by the Association of Music Producers, the show will take place on Tuesday, May 19, 2020, and returns for the second time to the incredible venue, Sony Hall in New York.

An official AMP Awards call for entries, which signals the opening of its online entry portal, will be announced early next year, to be followed by more news about the competition, including naming of the AMP Awards Show chair, its Curatorial Committee and its inductee into the AMP Hall of Fame.

The 2019 AMP Awards show was a sold-out affair and included a number of major highlights. Apple was honored with induction into the AMP Hall of Fame, where it was recognized for Outstanding Achievement in the Use of Music to Define the Brand. It joined a list of past honorees that includes Mars, Inc., More