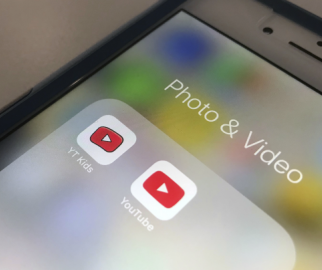 In this Wednesday, April 25, 2018, file photo, the YouTube app and YouTube Kids app are displayed on a smartphone in New York. A new survey confirms what a lot of parents already know: Teens and tweens are consuming a lot of online video, often on services such as YouTube. (AP Photo/Jenny Kane, File)
By Martha Irvine, AP National Writer

The number of young Americans watching online videos every day has more than doubled, according to survey findings released Tuesday. They're glued to them for nearly an hour a day, twice as long as they were four years ago.

And often, the survey found, they're seeing the videos on services such as YouTube that are supposedly off limits to children younger than age 13.

"It really is the air they breathe," said Michael Robb, senior director of research for Common Sense Media , the nonprofit organization that issued the report. The group tracks young people's tech habits and offers guidance for parents. 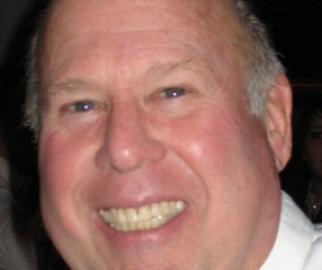 The Art Directors Guild (ADG, IATSE Local 800) announces that Stephen Myles Berger, best known for his work in theme parks around the world and on films such as The Sunshine Boys, Basic Instinct and Robin Hood: Men in Tights, will receive a Lifetime Achievement Award from the Set Designers and Model Makers (SDMM) Council at the 24th Annual ADG “Excellence in Production Design” Awards. Berger’s illustrious career spans five decades and has earned him international acclaim. The 2020 ADG Awards will be held at the InterContinental Los Angeles Downtown in the Wilshire Grand Ballroom on Saturday, February 1, 2020. This is the third of four Lifetime Achievement Awards to be announced by Art Directors Guild.

“Stephen’s artistic abilities have traversed television, film and theme parks for the last half century. Those who have had the chance to work with him enjoy his energy, enthusiasm and skill. We appreciate his years of service More 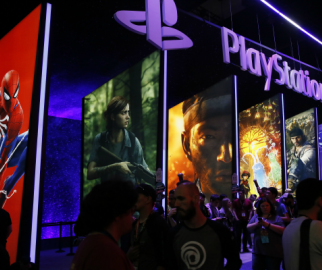 In this June 14, 2018, file people stand online next to the PlayStation booth at the 24th Electronic Entertainment Expo E3 at the Los Angeles Convention Center. Sony is shutting down its pioneering online-cable alternative, PlayStation Vue, citing the high costs of content and the difficulty of network deals. (AP Photo/Damian Dovarganes, File)
By Tali Arbel, AP Technology Writer

Sony is shutting down its pioneering online-cable alternative, PlayStation Vue, citing the high cost of content and the difficulty of reaching deals with networks.

It launched Vue in early 2015 as a skinnier, cheaper version of cable or satellite TV delivered via the internet. It was a test case for a TV alternative alongside Dish's Sling TV, and, later, a slew of copycats from DirecTV , Google , Hulu and others.

These services were initially heralded as the future of TV as cable cord-cutting ramped up. They offered popular TV networks for less than you'd pay a cable company. Signing up and canceling were easy, with no need for a cable guy to come to your house.

But customer growth has slowed and even dropped for many of these services as prices rose and they added more channels, coming closer to their traditional TV counterparts. AT&T's version, formerly known as DirecTV Now, today AT&T TV Now, has dropped customers for More 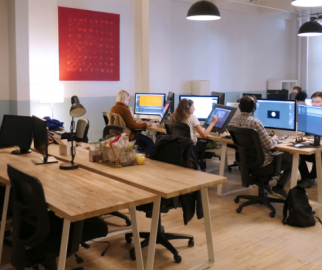 Multi-award-winning creative studio The-Artery has opened “THE-LAB,” a hub for creative artists and visual storytellers to not only operate, but also collaborate.

Based in NY, THE-LAB is structured to be an environment conducive to innovation, offering a home for complementary talent to work with and alongside each other. “First and foremost, this is a business playground for building companies, products, careers, and, most importantly, relationships,” explained Vico Sharabani, founder and executive creative director of The-Artery. “Our strategy is to design conditions in which bold and exciting ideas can be envisioned and launched organically rather than try to define what they’re supposed to be.”

Boasting a spacious physical layout within The-Artery’s own creative studio, THE-LAB hosts high-level talent curated from a diverse range of mediums, carefully taking into consideration the opportunities for collaboration and potential More

Hundreds of Facebook employees have signed a letter to CEO Mark Zuckerberg and other executives saying they oppose the social network's policy of letting politicians lie in advertisements.

The New York Times reported Monday that more than 250 workers have signed the letter urging Facebook leaders to change the policy that they say is a "threat to what FB stands for." While that's a small fraction of Facebook's workforce of more than 35,000, it's a rare showing of employee dissent generally more typical of Google and Amazon.

Facebook spokeswoman Bertie Thomson says the company appreciates its employees voicing their concerns but the company "remains committed to not censoring political speech." 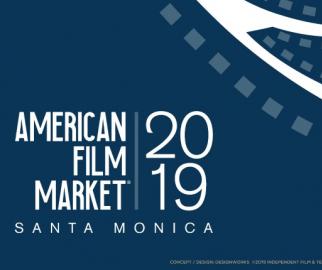 LocationEXPO® returns to the American Film Market, November 9–12, with 50 film commissions, government agencies, production facilities and services from around the globe confirmed to participate.  Located in dedicated exhibition space within the AFM, LocationEXPO has become a showcase for AFM attendees to learn and gather information about locations, production incentives, services, and resources available to their projects and films. 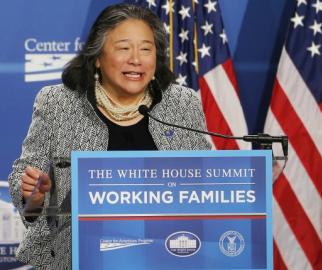 In this June 23, 2014, file photo, Tina Tchen, chief of staff to first lady Michelle Obama, speaks at the White House Summit on Working Families at a hotel in Washington. Time's Up has called on NBC Universal to release all former employees from non-disclosure agreements that might be preventing them from speaking out about sexual misconduct. Tchen, incoming president and CEO of Time's Up, says NBC Universal didn't go far enough with its statement, first reported by MSNBC's Rachel Maddow on Friday, Oct. 25, 2019, that employees should contact the company in order to be released from any "perceived obligation" to remain quiet. She says NBC should simply state that everyone is free to speak without fear of retaliation. (AP Photo/Charles Dharapak, File)
By Jocelyn Noveck, National Writer
NEW YORK (AP) --

Activists called upon NBC Universal on Saturday to allow former employees to speak out freely on sexual harassment in the workplace without restriction, rather than having to come to the company first to be released from non-disclosure agreements.

The company said Saturday that any former employee who believes they cannot disclose their experience with sexual harassment as a result of a non-disparagement agreement should contact the company, "and we will release them from that perceived obligation."

The statement, which was emailed to The Associated Press, was first reported Friday night by MSNBC's Rachel Maddow, in an emotional segment introducing author Ronan Farrow. The highly influential MSNBC host expressed deep concern that her own company's bosses had thwarted Farrow's reporting on sexual misconduct allegations against Harvey Weinstein — reporting which he then took to The New Yorker, where he won a Pulitzer Prize. 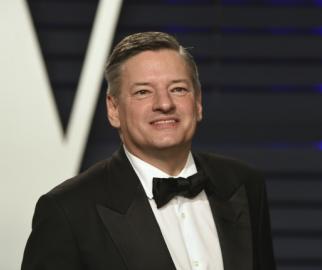 This Feb. 24, 2019 file photo shows Netflix chief Ted Sarandos at the Vanity Fair Oscar Party in Beverly Hills, Calif. Sarandos will be honored in early 2020 with an award by the Producers Guild of America. The guild announced Friday, Oct. 25, that Sarandos will receive its top honor, the Milestone Award, at its awards ceremony on Jan. 18. Since 2000, he has led Netflix’s content efforts including its first foray into original programming with “House of Cards” in 2013. (Photo by Evan Agostini/Invision/AP, File)
LOS ANGELES (AP) --

Netflix chief Ted Sarandos will be honored in early 2020 with an award by the Producers Guild of America.

The guild announced Friday that Sarandos will receive its top honor, the Milestone Award, at its awards ceremony on Jan. 18. Since 2000, Sarandos has led Netflix's content efforts including its first foray into original programming with "House of Cards" in 2013.

Netflix is now the leading streaming platform, with several competitors including Disney, Apple and WarnerMedia set to launch new services next months. 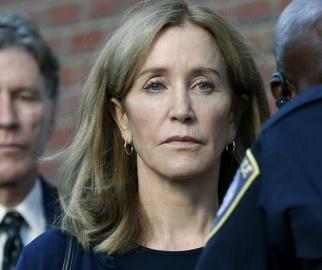 Actress Felicity Huffman was released Friday morning from a federal prison in California two days before the end of a two-week sentence for her role in the college admissions scandal, authorities said.

The "Desperate Housewives" star was released from the low-security prison for women because under prison policy, inmates scheduled for weekend release are let out on Friday, the U.S. Bureau of Prisons said.

Her husband, actor William H. Macy, dropped off Huffman — aka inmate No. 77806-112 — at the Federal Correctional Institution, Dublin in the San Francisco Bay Area on Oct. 15, with one day of credit already banked for the day she was originally arrested and jailed.

A federal judge in Boston last month sentenced Huffman, 56, to two weeks in prison, a $30,000 fine, 250 hours of community service and a year's probation after she pleaded guilty to fraud and conspiracy for paying an admissions consultant $15,000 to have a proctor correct More 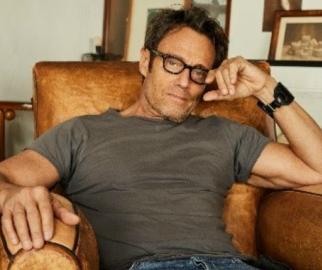 “Michael Kaplan’s prolific career is both diverse and inspiring. His iconic projects such as Blade Runner, Fight More