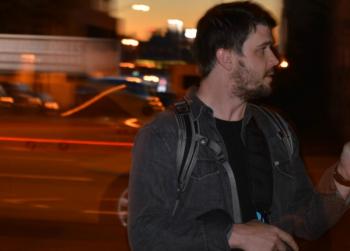 “Music is the heartbeat of the film,” said Henry Roosevelt, referring to “Tough Guys,” the new documentary he directed with W.B. Zullo. “I’ve always believed that the audience comes into the theatre with the commonality of a heartbeat. Once the lights dim down, we have the ability to do anything with that. We can elevate it or we can slow it down. But most importantly, we can move the emotions of the audience with music. Whether it’s editing to the beat or dropping the music completely, music accentuates the most important visual elements of film—to the point where, if done correctly, they bleed into each other seamlessly.”

Roosevelt says he had some specific source references for editing to the beat, but was looking for a unique musical hybrid, encompassing Southern blues-rock, 1980s synth pop, and Kung Fu.

Additionally, noted DiBiase, “Henry can only edit along to music. As the cut got better and better, some placement holder music no longer worked.”

Kelly said he gave a treatment to what was then the opening scene of a very early edit. “We sat down afterwards and really hashed out what should shine in the film,” explained Kelly, pointing to the grittiness, the fighting techniques, the blue-collar grind, and the story, including time and setting. “Everyone in the room also grew up with synth scores that drove some of the greatest fighter films of all time in the late-1970s and 1980s. In a way, these musical focal points became characters to me.”

Kelly, Roosevelt, and DiBiase acknowledged that there were a lot of back and forth emails between them. “Matt took the guesswork out of knowing what we wanted,” DiBiase noted. “Matt was understanding our feedback and then nailing it. He has blown everybody away.”

Roosevelt called Kelly an equal collaborator on “Tough Guys,” adding, “We were always looking for ways to truncate exposition, and a driving score is a great way to do that. Without Matt’s tracks and [four] tracks from composer Dan Krysa, the film wouldn’t have been as entertaining.”

Kelly said he was primarily in creative contact with Roosevelt. “It was a constant open door of communication, which was fun as hell creatively,” he said. “A fresh idea was always coming up and incorporated. [The film’s editor] Brock Bodell was a very vital voice for the score as well.”

Larry Pecorella, Comma chief creative officer, has always referred to Kelly as “Captain Hook” for his “incredible ability to write melodies that you couldn’t get out of your head. He has, over the last five to six years, taken that talent and also turned himself into a great film composer.”

“Tough Guys” began innocently enough. Nearly three years ago, Henry Roosevelt and W.B. Zullo were sent a photo by Zullo’s brother, who was, at the time, a reporter for the Pittsburgh Post-Gazette. The decades-old image, of a hand-drawn muscle-jacked man, was promoting a “Battle of the Tough Guys” event near Pittsburgh in 1980.

The image is featured in the long-term installation, “Golden Gloves,” at the Heinz History Center’s Western Pennsylvania Sports Museum in Pittsburgh. The museum exhibition makes the claim that the roots of modern mixed martial arts were planted in a ballroom at the Holiday Inn in New Kensington, Penn. The fighters were a mix of bikers, steelworkers, teachers, cops, coaches, and salesmen.

Though neither Roosevelt nor W.B. Zullo envisioned being documentary filmmakers, such possible roots of modern mixed martial arts intrigued them. So began their research into two key karate promoters of the time, Bill Viola and Frank Caliguri, and their pioneering fights. Roosevelt and Zullo acknowledged that what began to emerge was a story steeped in place and time—a tribute to the spirit of the area during a challenging time for working-class Americans.

Two months after receiving the image of the hand-drawn muscle man, the directors took a fight poster to DiBiase, who was raised outside of Pittsburgh. Wanting to know more, DiBiase began researching the amateur promoters and scrappy brawlers, the movers and shakers of this grassroots fighting circuit that served as precursor to mixed martial arts and the Ultimate Fighting Championship.

Ultimately, “Tough Guys” is a story about martial arts, politics, and the human spirit.

This was never lost on Kelly, who made sure his score complemented the storyline and visuals. “It had to be dirty and raw, but also calculated to reflect the fighting techniques,” Kelly explained. “So I approached it as a melting pot of instrumentation that was continuously breathing, bringing up an instrument here and another one there. Edits changed throughout the process so the music had to reflect that. I enjoyed when new ideas would come from the guys as the edit changed to set the film into the perfect light.”

As if on cue, Roosevelt said, “Matt’s score didn’t overpower the images, it accentuated them. When you are looking for a collaboration on a singular piece, that’s all you can ask for—a perfect blend of sight and sound.”