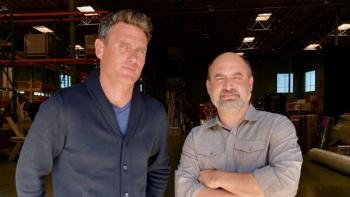 MC², an MCH Company and award-winning brand experience solutions agency, has added sr. creative producer Kevin Shuster to its Experiential Studio team. Launched in 2018, the studio’s premiere project was the successful immersive promotion of Netflix’s “Bird Box,” featuring Academy Award-winner Sandra Bullock. This was followed by an additional Netflix assignment in early 2019, and the completion of additional experiential projects for Lucasfilm and Ticketmaster this spring.

MC² Experiential Studio is led by executive creative director Richard Sears whose credits include immersive experiences such as “Transformers: Autobots Alliance” for Hasbro/VHE and “Avengers S.T.A.T.I.O.N.” for Marvel. Sears said the ongoing collaboration for MC² with Netflix has been incredibly rewarding. “The Netflix team really understands what we are trying to accomplish creatively and have provided us with a great deal of trust from the start of our relationship.”

Shuster’s strong knowledge of immersive storytelling is at the core of his many years in production of “live” theater, film, interactive, emerging tech and experiential. His body of work spans clients such as Warner Bros., and 2K Games, as well as global brands like Lexus and Samsung. Shuster had been freelancing for the past year, working on various projects at leading shops, including Imaginary Forces. Prior to that, he was at Saatchi & Saatchi’s Team One for nearly five years as an EP of emerging tech overseeing all interactive, display and VR/AR for all the agency’s clients except Lexus. He did, however, work on some of the larger web/digital campaigns and VR for Lexus and the Lexus Dealer Association.

Shuster said that his new roost “truly brings together every single experience I have had throughout my career into one multi-faceted position. Working with a talent like ECD Richard Sears is a unique opportunity, because we share the same vision for what the studio can do.”

Sears noted that Shuster’s career “has seen the gamut of every sort of position and experience this industry has to offer from being in-house at an agency, to production and postproduction, to VR and AR. He brings a wealth of knowledge in all areas and a passion for telling great stories.”

MC² COO David Kuznick added, “Kevin’s deep background producing cutting-edge experiences for some of the world’s leading brands is a powerful asset for the Studio during this very exciting time.”