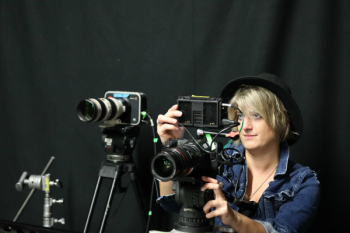 Filmmaker K. Rocco Shields founded Genius Produced in 2012 off of the success of her award winning short “Love Is All You Need,” which focused on the harmful effects of bullying, homophobia and prejudice. The film became an inspiration and model for how the company would operate moving forward. Genius Produced quickly staked a claim as an industry leader in producing content for top universities and organizations around the world.

The company has a base of operations in a 15,000 square foot facility in Culver City, California that encompasses the full workflow of filmmaking, from development and pre-production through post. Shields was drawn to the Blackmagic workflow early in the company’s growth. “We used to use DSLRs for everything, but it was a terrible crunch for our post production process,” said Shields. “Filming was difficult with the ‘Frankenstein’ component of these other cameras.”

With the release of the original Blackmagic Cinema Camera 4K, the company’s entire workflow was revolutionized.

Today, the company still utilizes the original Cinema Cameras, which Shields noted, “have certainly lasted the test of time,” and now augment them with Blackmagic Studio Cameras and Micro Studio Cameras 4K. In post, the company relies on DaVinci Resolve Studio for color and finishing, appreciating the ability to shoot in film mode for maximum dynamic range.

Beyond scripted content, Genius Produced also works heavily in the area of live production, with projects that cover live performances, presentations, lectures and more. The company also uses all of their Blackmagic cameras in conjunction with their ATEM Television Studio Pro HD switcher, giving their directors the same high image quality but in a live format. The studio moves quickly, with projects moving from set to set, and the compact size allows the team to move equally fast. “We feel this combination of high quality, but compact size is a life saver,” said Shields. “It’s the only way to maintain efficiency and integrity of process during our live productions.”

Along with steadily producing quality educational content, commercials, documentaries, and other high concept projects, Genius Produced has gained a reputation for creating transcendent, socially conscious feature films, including the previously completed feature length adaptation of the viral-sensation “Love Is All You Need”, as well as an upcoming historical biopic about legendary aviator and Hollywood stunt pilot Pancho Barnes. These projects, and the remaining films in Genius’ slate of original content have proven that the Genius Produced style of filmmaking can be powerful and effective regardless of the medium. “At our core is a focus of inclusiveness, support and acceptance, which pervades every level of the company. We couldn’t justify supporting a strong message of acceptance and inclusion in our work and not do the same in our business.”

Shields has already begun an upgrade of systems, starting with the URSA Mini Pro G2 and Blackmagic Pocket Cinema Camera 6K, but is pleased that even her oldest gear is still so reliable, after all these years. “With Blackmagic products we are able to attain the quality and look of traditional formats without compromising or disrupting our workflow and processes. Our entire business model is reliant on flexibility on-set and during postproduction,” said Shields. “No matter how much planning goes into a shoot, we are always going to want to test the waters in another direction.”