CinemaStreet Pictures [This release withdrawn by SPW due to client request ]

SNS' EVO with a sampling of creative apps

Necessity is the mother of invention. And when the pandemic hit, leaving creatives and producers to grapple with ways to somehow keep business going, Emmy-winning entertainment marketing and production company NuContext got down to inventing, literally.

“The world was shut down in March (2020),” recalled Emmy-winning producer Angela Guice who founded NuContext in 2006, embarking on a journey of 15 years and counting which has yielded the conception, production and post of promotional campaigns spanning live-action shoots, promos, branded content, commercials and music videos for TV networks, streaming services, theatrical films, Fortune 500 brands, music labels, multi-media corporations and their products. Working with such clients as The Walt Disney Company, Netflix, Hulu, Viacom, Warner Media, NBCUniversal and DreamWorks, Guice and NuContext have won assorted awards including an Emmy, Promax BDA, Tellys and Addys.

Rather than have the COVID-19 crisis stem that prolific tide, NuContext sought ways to continue some semblance of content-making safely and responsibly--that’s when Guice’s partner in NuContext, technical director Mikael Tyrsen, got into the flow. Tyrsen has both tech and filmmaking acumen, the latter reflected in his earning a slot in SHOOT’s 2019 New Directors Showcase. As for his prowess as a TD, Tyrsen in response to the pandemic created and developed contactless, wireless remote production drop kits with easy to use, high production value cinema cameras and lighting packages that can professionally capture talent in their homes or immediate environments. 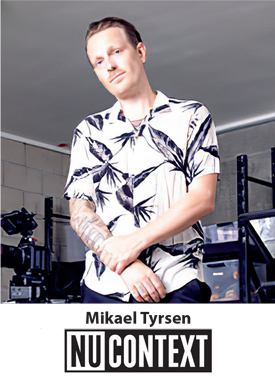 The setup includes virtual conferencing for remote supervision and direction, complete with teleprompter, a makeup touch-up kit and other resources to help talent look and sound their best. Over the months while serving various clients as the pandemic unfolded, Tyrsen continually refined the package, experimenting with cameras before ultimately opting for Z-Cam cameras that record 4K or 6K ProRes 422 HQ and are remotely controlled by NuContext pros to handle varied functions virtually such as focus pulling, exposure, white balance, pan and tilt. Components of the NuContext Drop Kit are lightweight, making for lighting, for instance, that can be set up with relative ease. Thorough yet simple instructions are provided with easy-to-follow schematics catered to each particular shoot. The kit even includes a laptop computer to facilitate the fully encrypted and secure Zoom sessions connecting on-camera and filmmaking talent. The monitor at NuContext headquarters is color corrected in concert with the cameras so that what’s on screen is an accurate representation of what’s being recorded.

Since March of 2020, NuContext has completed more than 165 remote shoots, the balancing act entailing making things simple logistically while at the same time realizing creatively ambitious projects. For example, NuContext brought a music video for Disney Channel’s Halloween House Party special to fruition featuring 14 Disney performers filmed remotely over three days in three different states and Canada. NuContext also turned out a “Bright” music video for the Netflix series Julie and The Phantoms. Directed by Kenny Ortega, the remotely produced video featured talent in the U.S. and Canada. Ortega, a director and EP on Julie and The Phantoms, has won Best Directing and Choreography Emmys for the 2002 Winter Olympics Opening Ceremony, and a Best Choreography Emmy four years later for High School Musical. NuContext also celebrated Latinx Month (October 2020) with a campaign teaming Hulu with The Black List, promoting the 2020 Latinx List, which focused on hourlong and half-hour original pilots written by at least one Latinx writer and featuring a Latinx or Latin American character in a prominent role. The inaugural Latinx TV List is a joint project of The Black List, The Latin Tracking Board, NALIP, Remezcla, and the Untitled Latinx Project.

As part of this initiative, Hulu released  “All Accents Welcome,” a digital series of videos that profiles each of the featured writers. Using their 100% contactless virtual filming system, NuContext filmed each of the 10 selected writers in their homes being interviewed by a friend or family member. The resulting conversations were candid, insightful and often emotional, giving viewers an inside look on their unique backgrounds, and backstory on how their scripts were influenced by their life experiences. Filming 10 talents over the course of three days in four different cities, NuContext guided the writers on setting up camera, audio and lights for their on camera interviews, while client and production monitored over a virtual video village.

Guice observed that the Latinx campaign proved illuminating, underscoring how people freely shared their thoughts, feelings and aspirations without a professional interviewer present. She was struck by “the level of candidness” displayed, facilitated in part by the remote production setup.

While the drop kit has fueled NuContext’s business during the pandemic, the company now sees the promise of selling the tech packages to networks, studios and other content creators. Tyrsen hopes to get the ball rolling on that front. For one, safe remote production remains important in a continuing pandemic. But even when we get back to normal once COVID is under control, there figures to be a new normal. Lessons learned during the pandemic will impact the marketplace. The advantages of remote production will still make it viable even when conventional production is once again the norm.

“We discovered a new way of working which has been possible this whole time but never explored before,” noted Tyrsen. “We’ve run across a great way to save money and still maintain high quality. In some cases, this will probably have people rethink certain shoots in the future.”

For example, Tyrsen noted that a documentarian will meet a subject in person to establish a relationship of trust before conducting an in-person interview. But what if repeated follow-up interviews are needed? Rather than incur travel and other related expenses, a remote connection could suffice, giving an extra measure of budgetary control to a project.

For Guice, being nimble and inventive are virtues in times of so-called normal production as well as when trying to figure out ways to sustain when that production business is jeopardized by circumstances such as a pandemic. Among the prime lessons learned is constantly trying to think outside the box. Reflecting on the pandemic, she said, “Instead of waiting for production to open back up, you have to constantly be finding solutions. We all learned a lesson in adaptability.”

SNS
SNS (Studio Network Solutions) too has been responsive to the pandemic. The company has been providing remote-friendly solutions for many years, constantly anticipating and adapting to customers needs. Ryan Stoutenborough, president of SNS, recalled, “At the start of the pandemic, we fast-tracked some of our queued development plans related to remote workflow and got straight to work on developing new solutions for our users who were homebound and unable to access their on-premise media.

“First came Nomad, our remote editing utility. It takes the proxy files that EVO (SNS’ shared storage server) already creates for ShareBrowser previews and helps users access and download those proxies for bandwidth-conserving offline editing. As our users adopted Nomad as early as March 2020, we were fielding a lot of questions about how to connect to EVO from home with a VPN. While some customers already had a VPN in place, many did not, and they didn’t have an IT team to manage a robust VPN infrastructure either. Seeing this disconnect, we decided to build a VPN solution exclusively for EVO that didn’t require an IT team to install and administer.”

SNS Cloud VPN was built entirely in-house at SNS. It is hosted in the cloud, so there is no extra hardware to purchase or install. “Through a quick remote installation,” explained Stoutenborough, “we set your EVO up to connect to the VPN and show you how to get your users connected as well. Users manage their VPN instance independently, with built-in monitoring and administrative tools that--like all of our products--are easy on the IT.”

The SNS Cloud VPN service is built exclusively for EVO. It lets your creative media team access their media and workflow tools from anywhere. For example, when connected to EVO via SNS Cloud VPN, teams can use the ShareBrowser media asset manager to search, find, preview, comment, and tag their media. They can schedule on-demand or daily, weekly, or monthly backups and replication jobs with EVO’s automations engine and API, Slingshot. And it lets users activate Nomad remotely to help editors download their proxies and source media for offline editing at home or wherever they are.

EVO customers are deploying SNS cloud VPN to stay connected to their media worldwide. Smaller teams like Lancit Digital Media (run by Cecily and Larry Lancit, creators of the Emmy-winning children’s series Reading Rainbow) use SNS VPN for just one or two editors to log in remotely from across town. Others have dozens of remote users logging in from many locations, even internationally.

Some customers are even considering going fully remote. James Curry, CEO of Mindfile Multimedia, told SNS that he doesn’t see himself bringing freelancers into the studio anymore even after the pandemic is over. “With EVO and Nomad, we won’t need to have any editors physically present in the studio at all,” he said. They can just work from home. And he could expand his freelance pool to editors across the country, too.

Stoutenborough observed, “SNS Cloud VPN plays a big role in business continuity for the production and post environment. Nobody was prepared for this pandemic, but now, everyone can be prepared for the next scenario that keeps us out of the studio--whether that’s a third (fourth?) wave of the pandemic, a big storm is on the way, or you’re stuck in an airport with a delayed flight and a deadline to hit. Whatever it is, location is no longer a barrier to creative collaboration. I think the creative community should see SNS Cloud VPN as an opportunity for new workflow possibilities, not just a temporary solution for business continuity in the midst of the pandemic.”

Remote workflows will certainly be part of the new status quo, affirmed Stoutenborough. “Let’s say you have an editor who relocates out of town. Rather than losing that talent and replacing your lead editor, you can offer them a remote position full-time without sacrificing productivity or efficiency. Or if you wake up with a cold and want to work from home rather than taking the day off, the workflow and infrastructure is now in place to accommodate that. And if you want to hire a freelancer across the country, you don’t have to deal with shipping drives or uploading massive media files to cloud storage--just add them as a SNS Cloud VPN user and set the access to expire whenever you want. It really allows for so much more flexibility in the long-term that will provide lasting benefits long after the pandemic is over.”

SNS Cloud VPN, he said, “simply opens new opportunities for new workflows. When things go back to ‘normal,’ everyone can return to the office and use EVO, ShareBrowser, and all of their workflow tools the way they used to. And if they need remote access, they can log in that way too. In today’s (and tomorrow’s) uncertain world, it’s reassuring to know that you can always securely access your files, no matter where you are.”

This feature was sponsored by NuContext and SNS.  Click Here for information on participating in the next Workflow Solutions Sponsored Feature coming up in April.