Film Independent announced today that the call for entries for the 2019 Film Independent Spirit Awards is now open. The Regular Deadline is Tuesday, September 18, 2018, the Final Deadline is Tuesday, October 9, 2018 and the extended Film Independent Member Deadline is Friday, October 12, 2018. The nominations will be announced on Friday, November 16, 2018 in a press conference in Los Angeles. The 2019 Awards will be held on Saturday, February 23, 2019 and will premiere exclusively on IFC. In addition, the date for the 2020 Awards has been set for Saturday, February 8, 2020.

The Spirit Awards is the primary fundraiser for Film Independent’s year-round programs, which cultivate the careers of emerging filmmakers and promote inclusion in the industry. For sponsorship opportunities, please contact Albina Oks, Director of Corporate Sponsorship, at 323 556 9352 or aoks@filmindependent.org. To learn more about attending, please contact Jennifer Murby at 323 556 9353 or jmurby@filmindependent.org.

About THE FILM INDEPENDENT SPIRIT AWARDS
Now in its 34th year, the Film Independent Spirit Awards is an annual celebration honoring artist-driven films made with an economy of means by filmmakers whose films embody independence and originality. The Spirit Awards recognizes the achievements of American independent filmmakers and promotes the finest independent films of the year to a wider audience.

The Film Independent Spirit Awards are sponsored by Premier Sponsors

American Airlines and IFC. Getty Images is the Official Photographer.

About IFC
IFC is the home of offbeat, unexpected comedies. Series Brockmire, Stan Against Evil, Baroness von Sketch Show and Documentary Now! air alongside fan-favorite movies and comedic cult TV shows. IFC is owned and operated by AMC Networks Inc., and available across multiple platforms. IFC is Always On, Slightly Off. 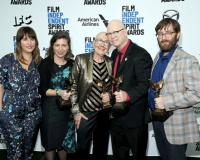 op honors were handed out today at the 35th Film Independent Spirit Awards ceremony to The Farewell, Uncut Gems, The Lighthouse, Marriage Story, Judy, Booksmart and See You Yesterday. Give Me...

Film Independent handed out honors today at the 34th Spirit Awards ceremony to If Beale Street Could Talk, Can You Ever Forgive Me?, Suspiria, Eighth Grade, First Reformed, Sorry To Bother You, The...

Film Independent, the nonprofit arts organization that produces the Spirit Awards and the LA Film Festival, handed out honors to Call Me by Your Name, Get Out, I, Tonya, Three Billboards Outside Ebbing, Missouri...